The annual Boston Marathon is scheduled to take place in three months on Apr. 23. This will be the 127th installment of the historic event that commenced back in 1897.

Registration for this year’s event has already closed. The competitors are locked in, and the field includes some of the world’s most well-known and record-setting runners.

“The Bay State” has made significant progress on the sports betting front, and both in-person and mobile/online sports betting will soon be available. Fans in the state will be able to enjoy several special Massachusetts Sports Betting Promo offers upon signing up, including a risk-free wager of up to $1,500 from Caesars, up to $1,000 from BetMGM and a $1,000-risk free bet from FanDuel.

Through these sportsbooks, customers will be able to place a variety of different wagers including futures, props, parlays, over/under totals, money lines and more. To date, more than 30 U.S. states have launched a form of legalized sports betting (mobile/online and/or in-person).

On Jan. 11, the Boston Athletic Association announced the competitors for the Boston Marathon races.. The men’s field includes Eliud Kipchoge of Kenya, one of the greatest athletes of his time with accomplishments that include 2016 and 2020 Olympic gold medals.

Another top contender for the crown includes Kenya’s Evans Chebet, who won the 2022 Boston and New York Marathon races. Chebet, who turned 34 in November, won last year’s Boston Marathon with a time of 2:06:51.

Gabriel Geay of Tanzania, 2019 World Champion gold medalist Lelisa Desisa of Ethiopia and Kenya’s Kipruto — the winner of the 2021 Boston and 2022 Chicago Marathon races — are among the other marquee names to follow in the men’s race.

The women’s field includes Edna of Kiplagat, who won the 2021 Boston Marathon when she was 41 years old. Now 43, Kiplagat is among the key favorites to follow in the women’s field.

USA’s Desiree Linden (the 2018 Boston Marathon Winner) and Atsede Bayisa of Ethiopia (the 2016 Boston Marathon winner) are the other two previous winners who are competing at this year’s event. Bayisa was also the winner of the 2010 and 2012 Chicago Marathon events and the 2009 and 2010 Paris Marathon races.

April Will Be A Real Busy Month For Boston Sporting Events

The month of April will certainly be a busy one for Boston sports.

Aside from the Boston Marathon, three of Boston’s “big four” professional sports teams will be in action: The NBA’s Boston Celtics, the NHL’s Boston Bruins and the Boston Red Sox of Major League Baseball.

Though the New England Patriots’ season ended earlier this month, football fans can at least look forward to the NFL Draft, which will run on Apr. 27-29 at Union Station in Kansas City, Missouri. Currently, New England holds the No. 14 selection in the draft.

The Celtics, the reigning Eastern Conference Champions, have the best record in basketball. Each of their final three regular-season contests will be held at the home venue of TD Garden: Apr. 5 and Apr. 7 vs. the Toronto Raptors and Apr. 9 vs. the Atlanta Hawks. Boston is a lock to make the NBA Playoffs, so barring a stunning first-round upset, their season will at least go into early May.

The Bruins — who also play their home games at TD Garden — currently boast the best record in the NHL, and it’ll take quite the second-half slump to miss out on their second Presidents’ Trophy in four years. The Bruins have three regular season home games in April: Apr. 6 vs. the Toronto Maple Leafs, Apr. 8 vs. the New Jersey Devils, and Apr. 11 vs. the Washington Capitals.

Like the Celtics, the Bruins are a lock to make the playoffs. Their season will at least run through late April, depending on how they perform in the postseason.

And then there are the Red Sox, who are looking to bounce back after a disappointing last-place finish in the AL East (78-84). They’ll open their season vs. the Baltimore Orioles on Mar. 30 at Fenway Park, and they’ll play their final game of April at home against the Cleeland Guardians on Apr. 30.

Throw in the Boston Marathon, and there will be no shortage of fun and games for sports fans in the state of Massachusetts. 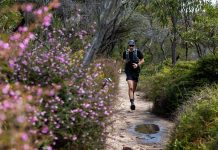 Is Cycling Better Than Running?