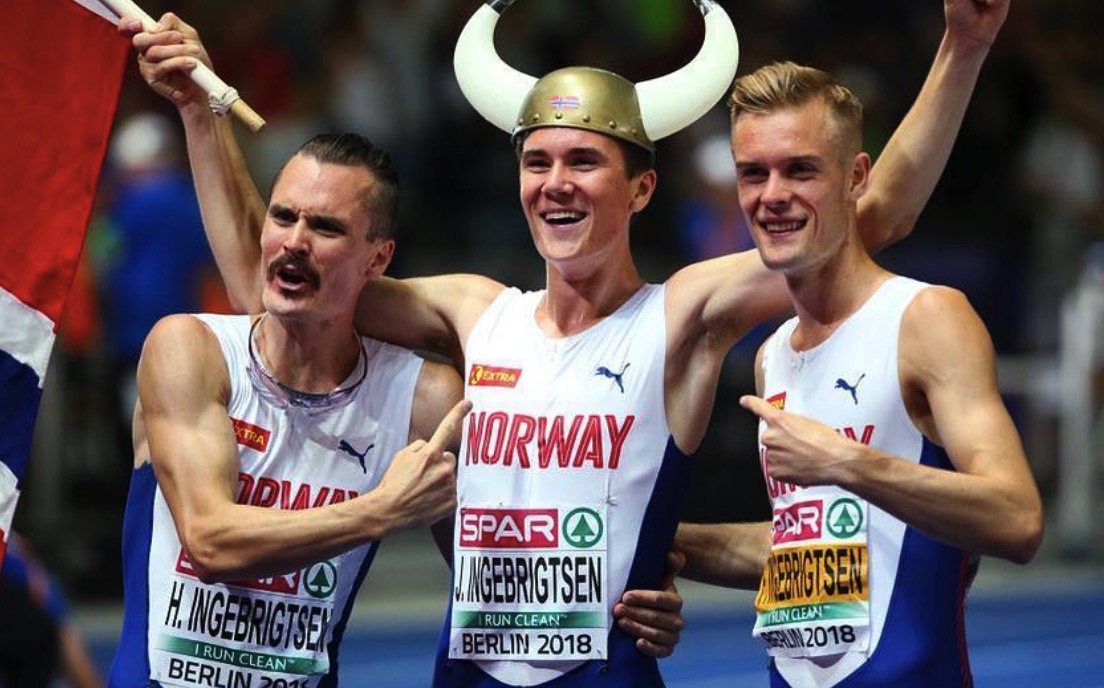 Len Johnson – Runner’s Tribe – Len is RT’s lead columnist, a sub 2:20 marathoner, Author of ‘The Landy Era’ and a key writer for the IAAF, amongst other things…

Youth is wasted on the young, George Bernard Shaw once observed. He surely did not have Jakob Ingebrigtsen or Armand Duplantis in mind.

Last weekend in Berlin, these two teenage athletes lit up the European championships with performances of precocious incandescence. The 17-year-old Ingebrigtsen (he turns 18 next month), won the 1500 metres on the Friday night. Less than 24 hours later, he made it a double, winning the 5000 metres.

On Sunday, Ingebrigtsen understandably rested. But 18-year-old Duplantis (19 in November) maintained the teen assault, setting a world U20 record of 6.05 metres in winning the pole vault.

While Ingebrigtsen’s double may have shaded Duplantis in athlete-of-the-championships considerations, the vaulter had an edge in performance. European men’s middle and long-distance running is not exactly at historically high levels, and has not been for some years (even if Ingebrigtsen has the potential to take it back there). At the World U20 championships a few weeks earlier he did not win either medal, finishing third in the 5000 behind Kenyans Edward Zakayo and Stanley Mburu and second in the 1500 to another Kenya, George Manangoi.

But Duplantis excelled both at absolute and comparative levels. His winning height of 6.05 has only been exceeded outdoors by the great Sergey Bubka (6.14, and a host of other clearances in between 6.05 and that height).

He joins three others at 6.05 – Renaud Lavillenie, Maksim Tarasov (1999 world champion) and Australia’s Dmitri Markov (2001 world champion). Lavillenie holds the outright world record at 6.16 and was among those Duplantis beat in Berlin. Lavillenie was 2012 Olympic champion, 2016 Olympic silver medallist and was seeking a fourth European title.

Others in Berlin included 2011 world champion Pawel Wojciechowski and 2017 silver medallist Piotr Lisek. In fact, just about the only significant name missing from the line-up was current world champion Sam Kendricks of the USA. Even he may have struggled to beat Duplantis. The teen had one miss at 5.80, but soared to victory by dint of first-time clearances at 5.85, 5.90, 5.95, 6.00 and 6.05 – amazing vaulting indeed. Each of his last three clearances represented a new world U20 record.

It must be acknowledged that both Duplantis and Ingebrigtsen swim in deep genetic pools. Duplantis is of US-Swedish parentage. His father, Greg Duplantis, was a 5.80 vaulter; his mother, Helena Hedlund, is a former Swedish heptathlete and volleyballer. One of his brothers, Andreas, has already represented Sweden at World Youth and U20 championships; the other, Antoine, is a baseballer.

Ingebrigtsen is the youngest of three brothers who have each won the European title. Henrik, now 27, won in Helsinki in 2012. He represented Norway at the London Olympics the same year, finishing fifth in the final. Filip, 25, won in Amsterdam in 2016 and was bronze medallist at the London 2017 world championships.

Much has been made of the Team Ingebrigtsen aspect, and understandably so. Had this writer been in Berlin, he would have been beating that angle to within a millimetre of its life along with everyone else. Even without researching it too deeply, however, there are limitations to such analysis.

No doubt, the brothers Ingebrigtsen have achieved a rare feat in each winning a major championship at the same distance, but siblings achieving at a high level in the same, or related, events is not all that rare. The three Borlee brothers – Kevin, Jonathan and Dylan – all competed in the 400 metres in Berlin, each winning a heat, Kevin (silver) and Jonathan (bronze) collecting medals in the individual event, and the three of them in Belgium’s gold medal 4×400 relay. Sister, Olivia, has also represented Belgium in the 4×100.

Two years ago, triplets Lily, Leila and Liina Luik represented Estonia in the Rio Olympic marathon, though not with similar distinction to the Borlees or Ingebrigtsens. Lily and Leila finished well back; Liina was a dnf.

Jakob and Henrik finished 1-2 in the European 5000 metres but that is arguably a lesser sibling achievement than Ismael Kirui winning the 5000 metres gold medal at the Stuttgart 1993 world championships just a few days after brother Richard Chelimo had taken the bronze behind Haile Gebrselassie and Moses Tanui in the 10,000. Between them, the Kirui-Chelimo siblings have five global medals – Kirui retained his 5000 title in Gothenburg in 1995; Richard Chelimo was silver medallist in the 10,000 at the Tokyo 1991 world championships and again at the Barcelona 1992 Olympics, in addition to his bronze in Stuttgart. George Managoi, who beat Ingebrigtsen in the U20 1500, is the younger brother of world champion Elijah.

The Ingebrigtsens probably have it over most siblings for depth – increasingly, the modern nuclear family does not go beyond two children, for a start – but other examples on high-achieving sports siblings coming to mind are the Williams sisters in tennis, the Brownlee brothers in triathlon, the Soh twins in the marathon and the three Ella brothers in Australian Rugby Union. In domestic Australian Rules, the four Daniher brothers – Terry, Anthony, Neale and Chris – all played at the senior AFL level, as have the four Selwoods – Joel, Scott, Adam and Troy.

Sibling rivalry has been a thing since Cain and Abel – though, fortunately, usually in a more benign manifestation.

We should not burden teenage stars with expectations of continued development. Development in sport, as in life, does not proceed in straight lines. Naturally, we would expect Jakob Ingebrigtsen and Armand Duplantis to keep getting better, but it won’t necessarily happen.

In between the Ingebrigtsen and Duplantis triumphs, I saw a documentary on the life of the Australian pianist, Geoffrey Tozer. Tozer showed very early signs of genius – at three he played a Beethoven sonata after hearing his mother teaching it to a pupil; he composed an opera at eight and won a Churchill Fellowship at 13. He died alone, ill and destitute at age 54. It is far more complicated, but the capsule summary of his musical life would be “peaked early; never got better.”

A day later, I saw Bob Dylan in Melbourne on what is supposedly his final world tour. Few would argue Dylan is getting better at the age of 77 (though some would), but he continues to perform at a high level.

The moral as it applies to Jakob Ingebrigtsen and Armand Duplantis? Enjoy them for what they are doing now. Hope, but do not expect, that they will keep getting better and better.