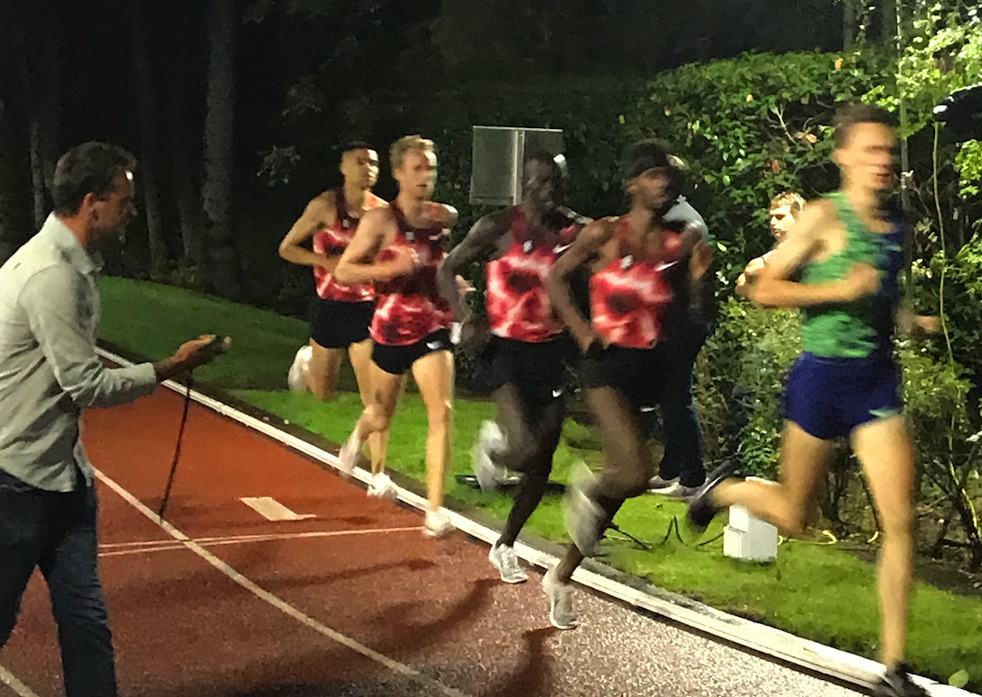 We haven’t become so blasé as to not welcome a sub-13 5000 metres. Not to mention two performances behind of 13:00-point.

That being the case, let’s say “WOW! WOW! wow” about the performances of William ‘Woody’ Kincaid, Lopez Lomong and Matt Centrowitz in Portland, Oregon last week. Kincaid, no better than a 13:26-performer before this (though he had a 13:12.22 indoor to his name) sprinted past Lopez Lomong to win in 12:58.10, rocketing from nowhere to fifth-fastest American all-time.

Lomong, winner of the distance double at the US national champs little more than a month ago, was second in 13:00.13, narrowly avoiding the unwanted distinction of becoming the man to have gone closest to 13 minutes without dipping under that mark. Matt Centrowitz, the Olympic 1500 champion, was third in 13:00.39, taking the family record (formerly 13:12.91 by his father, 1976 Olympian Matt Centrowitz sr).

Why the lower-case ‘wow’. Why not three full-throated cheers. Well, that would be the nature of the race. The 5000 was virtually a team time-trial for the Nike-backed Bowerman Track Club, run on the Michael Johnson track at Nike HQ. Kincaid, Lomong and Centrowitz are all BTC members, as is Canadian Mo Ahmed, the Commonwealth Games silver medallist behind Joshua Cheptegei at 5000 and 10,000 on the Gold Coast last year.

Ahmed took over from the first pacemaker after 1600 metres and led all the way to two laps to go. Not bad service, you’d have to say.

Not that this discounts the performances, of course, though it would have been nice to see some other elite athletes in such a race. (By way of disclaimer, I’ve no idea whether any asked to be included, or any were asked.)

The races was well publicised in the Portland running community and reports of the number of spectators vary from 300 to 2500. Hardly a private affair, then.

It’s not as if paced races are anything new, either. For better or worse, orchestrated pacing has been a thing at least since the days when Roger Bannister ran the first sub-four mile at Iffley Rd, Oxford, on 6 May, 1954. It’s not going away anytime soon.

Said Aouita first breached the 13-minute mark in Rome in 1987, running 12:58.39. Since then, no fewer than 101 others have joined the Moroccan great in the sub-13 club. That’s about three per year, on average, so hardly an avalanche. By comparison, 30 years after Bannister’s first sub-4, 113 others had run faster than 3:56 (the current cut-off time for the IAAF’s all-time list).

Then, as we shouldn’t, but inevitably do, if you take out African-born runners, Kincaid is just the seventh – and sixth-fastest – to break 13 minutes. This sub-list is headed by 1992 Olympic champion Dieter Baumann of Germany (12:54.70), from Solinsky (as above), Australia’s own Craig Mottram (12:55.76), Ritzenhein, Kincaid, Kennedy, Tegenkamp and Rupp (all as above).

Nothing to be blasé about when we see someone run sub-13, then. Woody Kincaid can invoke the qualifier we all used when (modestly) citing our own (much-to-be-modest-about) personal bests. “Yeah, I ran 12:58.10 – before it became fashionable.”

The other exciting thing about the Portland race – well, for some of us, anyway – was the sight of trees on the infield. No, not a line of potted shrubs as we see sometimes along the straight or, more creatively, under the steeple water-jump hurdle, but a stand of mature trees.

In the minds of some, this evoked images of other heavily-wooded tracks in track history. Primarily, of course, there is the famous track at Echo Summit, California where the US 1968 Olympic training camp and selection trials were held at an altitude similar to Mexico City. This track has been immortalised in the book Track in the Forest: The Creation of a Legendary 1968 US Olympic Team (Bob Burns).

The Finnish sports shoe company Karhu features a lakeside and forest track in Kangasniemi in a promotional video. No trees in the middle, though, just a lovely, lovely setting.

And then there was Irish promoter Billy Morton, at whose Santry Track Ronnie Delany raced and Australians Herb Elliott (mile) and Albie Thomas (two and three miles) set world records in 1958. Morton told Thomas, who subsequently and no doubt according to plan, told Elliott, that the trees ringing the track enriched the surrounding oxygen content, a boon to middle and long-distance runners.

Whatever, Elliott race at Santry on 8 August, 1958, beating Merv Lincoln, Delany, Murray Halberg and Thomas in 3:54.5, 2.7 seconds better than the previous world record. There certainly was something special in the air.

The trees at the Portland track played their part in the performance, too. Whatever they may have given the runners, they took away from the spectators, Kincaid’s college coach among them.

As the race report on LetsRun by Emory Mort relates: “Neither Kincaid’s collegiate coach at the University of Portland, Rob Conner, nor the author could see the finish, blocked by the iconic infield cedar stand, but as we hustled down the backstretch from the start line we heard, through the woods, “Woody Kincaid in 12:58.”

They said 12:58 for Woody,” the author said to Coach Conner, who responded without missing a beat, “I’m not surprised.”

Must have been the only one.