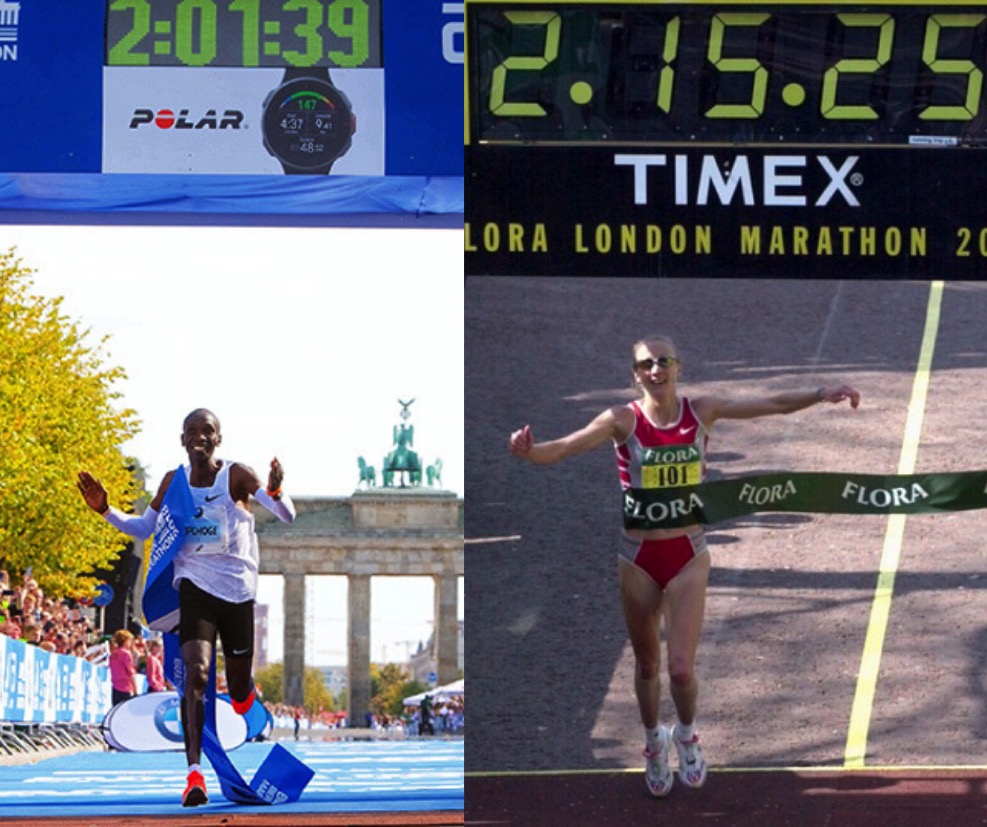 Paula Radcliffe and Eliud Kipchoge have one thing in common. Each holds the world marathon record.

Further, each holds the record with a performance variously described as “other worldly” and “putting the record out of sight for a generation”. Kipchoge’s 2:01:39 was described as a “moon landing” performance in one report; LetsRun’s Jonathan Gault speculated that it brought an end to the era of world record chases.

Gault is on firm ground, you would think. Radcliffe’s 2003 time has not been approached since, and we’re now at 15 years, and counting. Not until Mary Keitany ran 2:17:01 in London last year did any female runner surpass even Radcliffe’s second-fastest performance of 2:17:18 in Chicago in 2002.

Many think Radcliffe’s London performance was aided by the sort of pacemaking assistance (male runner(s) accompanying all the way) which other have not had the benefit of since, and a slew of female athletes are now running well under 2:20 (Gladys Cherono, Tirunesh Dibaba, Vivian Cheruiyot, Ruti Aga in addition to Keitany) but the 2:15:25 looks unassailable for some years yet.

An unapproachable world record, then, might be what we might classify as the “same, same” element of Radcliffe and Kipchoge. Other similarities include that both have enjoyed great success on the track, at other distances on the road, and over the country.

Otherwise, though, it is more “different, different”. Radcliffe ran her 2:15 at the apogee of the best period of running in a long, distinguished career, a time when she was performing at unprecedented levels over all three disciplines of track, oad and country.

Kipchoge’s 2:01:39, on the other hand, represents a performance produced at a time when he has narrowed his focus ever more acutely on running the fastest 42.195 kilometres of which he is capable.

Consider this. Radcliffe’s 2003 year was virtually all road. The IAAF/All-Athletics results for 2005 include a 30:21 10km road in San Juan at the start of the year and a 65:40 in the Great North Run later. Virtually nothing else. Nor did she defend her title at the world cross-country, having won the long race the two years previous.

A couple of months later, Radcliffe crowned all of that with a 2:17:18 win in the Chicago marathon.

Radcliffe did run the 10,000 at both the 2004 Olympics in Athens (a rare ‘dnf’) and the 2005 world championship in Helsinki, but then track went pretty much the way of cross-country as injury and family ate into the time she wanted to devote to world-class running. She won the marathon in Helsinki, beating defending champion Catherine Ndereba and soon-to-be Olympic champion Constantina Dita.

Arguably, then, Radcliffe’s narrowing of focus coincided with the final phase of her career.

For Kipchoge, it has been the opposite. The more single-minded his focus on the marathon, the better he has performed. His performances at cross-country do not match those of Radcliffe, but they are significant nonetheless. He won the junior race in 2003 and then finished fourth to Kenenisa Bekele in the senior long race the following year, the occasion on which Benita Willis became Australia’s first, and still only, world cross-country winner.

That edge was reversed on the track, where Kipchoge won a gold medal at 5000 metres at the Paris 2003 world championships some few months before his 19th birthday. He came through on the inside to beat Hicham El Guerrouj and Bekele right on the line.

Kipchoge kept on accumulating minor medals at 5000, with silvers in both the Osaka 2007 world championships (behind Bernard Lagat) and 2008 London Olympics (behind Bekele this time).

All that prompted Kipchoge to gravitate towards the roads and, even further, to the marathon. He made his debut with a win in Hamburg in 2013, finished second to Wilson Kipsang’s world record in Berlin later that year and has not lost since. For the past three years, his competitive range has pretty well been confined to half and full marathons, though the Rio Olympics and the commercial Breaking 2 project have been more than adequate compensation.

With an Olympic gold medal, a world record, the fastest-ever time for a marathon (Breaking 2’s 2:00:25) and his expressed ambition to contest another Olympic marathon, the focus on the roads is hardly likely to lose any intensity between now and Tokyo 2020.

Of course, things are never as simple as they seem. Kipchoge does plenty of dirt road and trail running at his Kenyan training base, and with Geoffrey Kamworor also a member of the Patrick Sang-coached group, runs regularly with a man who is competitive at the highest levels of track and cross-country. Given her background, it is likely, too, that Radcliffe never got far away from the training which made her so formidable at all forms of distance running.

But it is undeniable that Radcliffe’s path to her other-wordly record touched all the bases along the way, while Kipchoge’s “moon landing” was the culmination of an intense focus on one distance, one race.