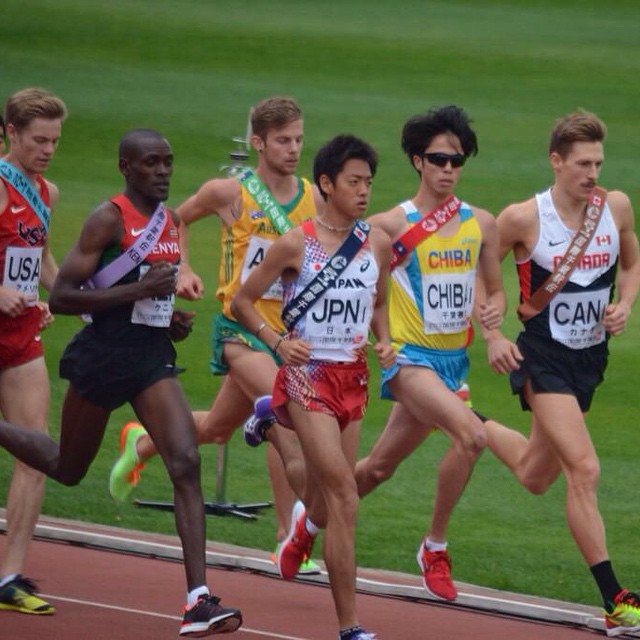 Imitation is the sincerest form of flattery, they say, and the idea of the Ekiden relay has long since gone international.

Well, at least to Victoria, anyway. Athletics Victoria paid homage – or should that be hommage – to the tradition of Japan’s road relays by adding an Ekiden to its winter program some years back. Complete with tasuki, the cloth sash which is worn over, or fashionably off, the shoulder and passed from runner to runner.

Now, with the sad news that this year’s Chiba International Ekiden Relay has been cancelled and that the Japanese Federation will no longer stage the annual race it seems that having given the Ekiden to the world, Japan has decided to keep its own versions to itself. The excellent Japan Running News blog records that the cancellation means that “the last vestige of internationalism in Japan’s ekiden circuit is the (USA) Ivy League alumni team at October’s Izumo Ekiden.”

Don’t know about yours, but my dictionary defines a “vestige” variously as a trace, a tiny amount or a particle, so it would seem there is now bugger-all to distinguish the internationalism of Japan’s ekiden circuit from Monty Python’s dead parrot.

Which is a great pity, especially for Australia, which has a proud record over the history of involvement in the Chiba relay dating from its inception as an international race in 1988.

Seko ran the last race of his career on the final leg of the 1988 Chiba Ekiden. Hopes of a glorious finale were scuppered by Australia’s Brad Camp who impudently dashed past the great man on the 12.195km leg to grab second place behind Ethiopia.

Competition in Japan offers several advantages to Australians, chiefly that although we face a longer journey to get there than athletes from most other countries, Japan is in our time zone.

Ask any Australian athlete how good it is to hear everyone else whingeing about jet lag and the day-for-night time change. And to observe (with just a hint of smugness), “Oh, we have to put up with that all the time.”

Or hearing American and European athletes complaining about the “crazy traffic” on the wrong side of the road. In Japan they drive on the left, just as they do in Australia, so what’s crazy. By Asian standards, Japanese drivers are pretty deferential towards pedestrians, too. So Aussies don’t expend precious mental energy wondering whether crossing the street on each run is going to be the last thing they do.

Australia won the men’s race at Chiba three times between 1988 and 2007 (when Chiba became a mixed-team event). Of course, it also helps to have Steve Moneghetti on the anchor leg.

‘Mona’ has run some great relays for club and country. He reserved two of his ‘very special legs’ to take the 1991 and 1992 men’s teams to victory. Interestingly, those Chiba Ekidens followed Moneghetti’s two most disappointing championship marathons – 11th in the Tokyo 1991 world championships which, in his own sardonic words, was made to look good a year later by a 48th in the Barcelona Olympic marathon.

In both years, the Australian was untouchable on the hilly, 12.195km final leg, running a course record 34:32 in 1991 and beating that by three seconds faster the following year.

Moneghetti produced another ‘blinder’ in 1997, which broke the bad championship-great Chiba pattern as he had taken the bronze medal in the world championships marathon a few months earlier. His 35:02 charge took Australia from seventh to third.

Before that, Australia had notched its third win in five years when the team of Rod De Highden, Julian Paynter, Ray Boyd, Robbie O’Donnell and Sean Quilty won the 1995 race.

Australia was second in 1998 and third in 1999 – set up by Andrew Letherby’s 27:55 on the opening (downhill) first leg – and 2000 before Kenya and Ethiopia started to dominate the men’s race. The two east African nations were aided considerably in fielding strong teams by the number of athletes from both countries running for Japanese schools, colleges or corporate teams.

The women’s team was not as successful, a third place in 1993 being the only other time it reached the medal dais. The latter team was built around a strong nucleus in future world triathlon champion Emma Carney, Susie Power and Kerryn McCann.

Though many top international runners raced in the Chiba Ekiden it became increasingly hard for organisers and national teams to attract the best runners. Reflecting this, and also looking for a promotional angle, the race went to a mixed-team format in 2007 – three men and three women making up a team of six.

In Australia’s case, it likewise became harder to get the top runners to run the longer legs. This was even more acute in the mixed-team format in the two 10km men’s legs make up almost half the marathon distance. Teams with slow runners on these legs are cooked before they start.

The development side was still good for Australia. In the past 10 years Collis Birmingham, Liam Adams, Lara Tamsett, Ben St Lawrence, Jess Trengove, James Nipperess, Harry Summers, Emily Brichacek, Jack Rayner and Courtney Powell either as their international senior debut or very early in their careers.

Footnote: The IAAF sought to build on the success of the Japanese ekidens with its own road relay championship. The first edition was staged as a World Challenge Relay in Hiroshima in 1986.

Steve Moneghetti, Andrew Lloyd and Adam Hoyle were part of an Oceania team (Dave Burridge and Chris Tobin the NZ members) which finished third behind Ethiopia and Great Britain.

Lorraine Moller, Hazel Stewart, Mary O’Connor, Sue Bruce, Anne Audain and Anne Hare formed the NZ team which won the women’s race from the USSR and the USA, a team that would have been highly competitive anytime, anywhere.

Four championship editions of the World Road Relays were staged from 1992 to 1998.