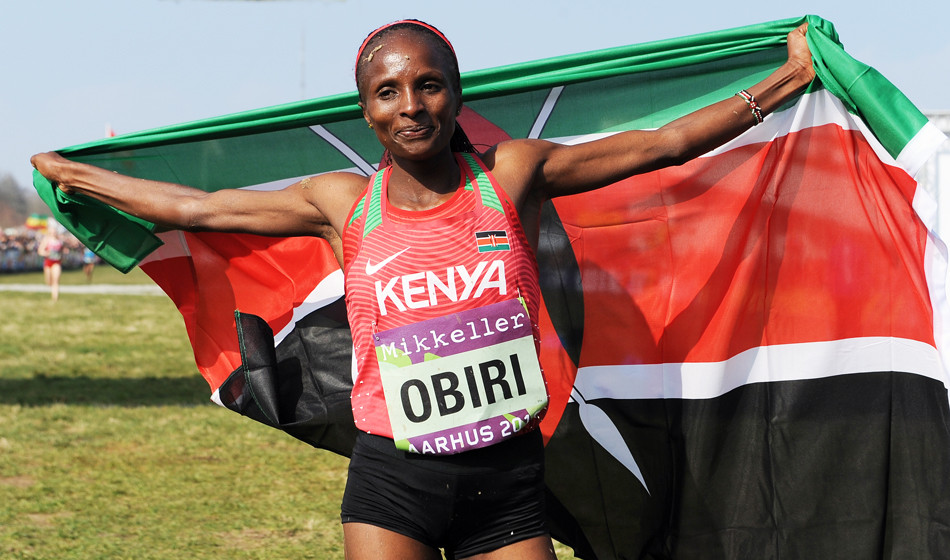 As the lead pack in the senior women’s race battled its way around the second half of the tough Aarhus course in the recent world cross-country championships, it wasn’t easy to pick the likely winner.

The next runner to drop off, now that was another matter altogether. Hellen Obiri always seemed to be working harder than anyone else in the group. Her track credentials may have been impeccable, with world championship golds both indoors and out, but this was her first world cross-country appearance and there was precious little previous form to suggest her debut would be winning one.

Then, there was that style, bent forward, shoulders up, head bobbing from side to side, arms swinging across the torso: Obiri looked just too darned busy to triumph around the always up or down, never flat, Aarhus loop. The winner would surely be someone who squandered no energy on uneconomic movements, like Obiri’s teammate Beatrice Chepkoech, who glided to the lead early; or the Ethiopian duo Dera Dida and Letesenbet Gidey, who were still there as the leading trio entered the final 2km lap.

Every runner leaned into the steep climb up the roof of the Moesgaard Museum, the pivotal feature of each lap. Obiri bent almost double, her nose virtually scraping the ground as if she were searching for something she had dropped the previous time around. And, on the last lap, Dida for a moment looked as if she had regained some ground on the ascent, but Obiri surged decisively off the top of the ramp.

Although the final margin was just two seconds, Obiri was never seriously challenged again. She is now the only woman to win world titles indoors, outdoors and at cross-country (the only man to do so is Kenenisa Bekele, so she is in race company).

That’s the thing about Hellen Obiri: she may not look a winner but, right now, Obiri pretty well always wins. Style, of course, is something, but it does not explain everything, otherwise Emil Zatopek and Paula Radcliffe, to name but two, would never have won anything.

Anyway, Obiri has continued on her winning way post-Aarhus. At the Diamond League opener in Doha, she controlled the final stages of the 3000 metres to defeat Genzebe Dibaba, 8:25.60 to 8:26.20. Close, yes; but, watching the final lap there was no way Obiri was letting anyone past and no way anyone looked like getting past. Last weekend, Obiri won the Greater Manchester 10km in 31:23, well clear of sub-2:20 marathoner Ruti Aga and two-time world marathon champion Edna Kiplagat.

In a pre-race interview in Manchester, Obiri said she intends to target a 5000/10,000 double at the world championships later this year in Doha and to move to the roads and marathon post-Tokyo 2020, “like my friend Vivian Cheruiyot.” She acknowledged it would be tough to make the Kenyan team at 10,000, but I’m sure I am not alone in letting it be known that she will be a contender. As far as the marathon goes, her friend Vivian has run 2:18:31 in winning last year’s London marathon, so “like her” will be pretty good.

Whatever Hellen Obiri might achieve in the near future, we should enjoy what she is doing now. Her world cross-country victory came following a considered decision to target the event. As she told Britain’s Athletics Weekly in Manchester: “What made up my mind is that I’m almost done with the track so I think I need to do final, final things.” She was speaking of the 10,000 then, but no doubt the same thinking applied to the cross-country.

Winning the world cross-country has never been easy; winning on a course like Aarhus was a tough test for one known mainly as a trickster. After the race, she told the IAAF website that the manner she had attacked the hill was tactical.

“I thought you must look down, as you don’t want to look up to see where you are going and at how difficult the hill is. I knew it wasn’t going to be a test of speed, as it was a tough hill. It was all about mind games.”

Tough hill meets tough runner. Obiri has shown since breaking through to international class that she is a formidable competitor. In Daegu in 2011 she reached the final of the 1500 metres but was brought down in a fall on the bend some 500 metres from the finish. She got up and completed the race, but her determination had its reward in the 3000 metres at the world indoor championships in Istanbul the following March.

Obiri was up against Meseret Defar who was seeking her fifth title at the event (the drive for five, asit was inevitably dubbed). Cheruiyot had out-sprinted Defar to win the 5000 metres in Daegu and the Ethiopian runner seemed to be experimenting with a long kick for home in Istanbul.

I reported on that race for the IAAF website. Defar took the lead after nine of the 15 laps, gradually winding the pace up. “The next two laps (400 metres) took 66.38 seconds,” I wrote, “the two after that were quicker still – 64.70. A lap to go, and all Defar had to do was something she has done so many times, control the final lap.

“With 100 metres to go, it still looked as if she would – but then along came Obiri.” It was “one of the boilovers of the championships,” I noted.

Obiri’s “drive” in Istanbul proved stronger than Defar’s “drive for five.” And Obiri is still driving just as hard now. Let’s see where she goes.