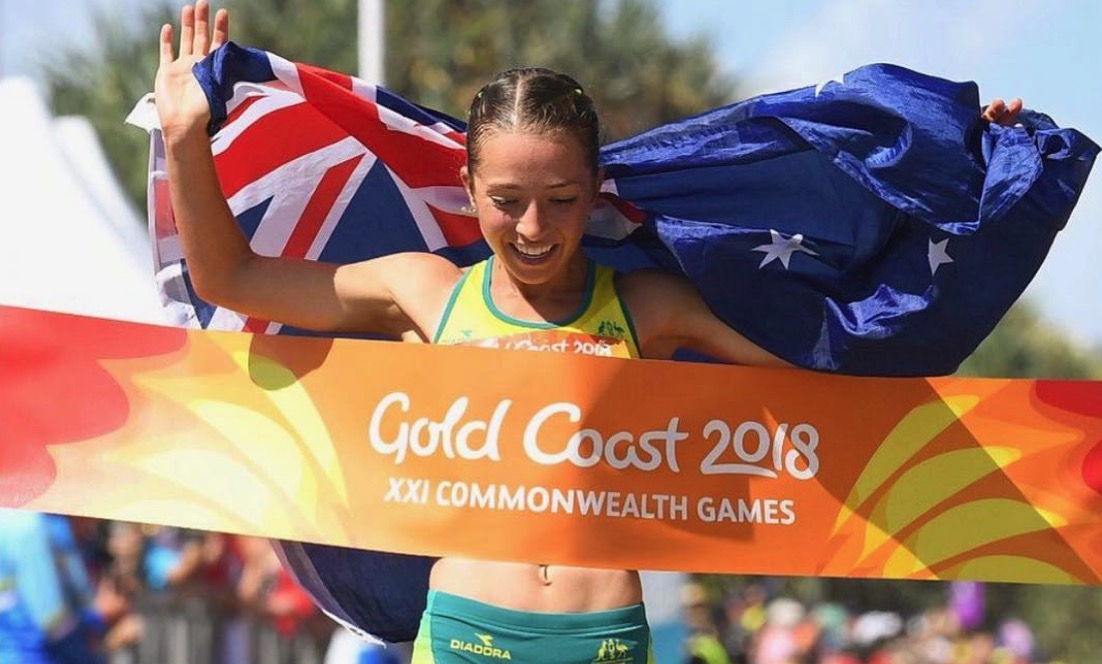 By Len Johnson – Runner’s Tribe – Reporting from the Gold Coast

The wild weather which washed out the walking events at the Australian 50km championships in Melbourne at the start of December last year turned out to be a perfect storm for Jemima Montag.

The then 19-year-old Montag was down to make her 20km debut in the accompanying women’s race, but the wild weather forced the event to be re-scheduled two weeks later.

During those two weeks, Montag’s family offered accommodation to New Zealand walker Alana Barber, who had also been going to compete in the 20km. The pair of walkers shared a coach in Brent Vallance and trained together during the delay.

Montag, whose only previous international credential was with a junior team at the 2014 Race Walking World Cup in Taicang, walked an impressive 1:34:18 on debut in Melbourne’s Fawkner Park, a venue which has flourished as a national and international venue in recent years.

Two months later, Montag was in Adelaide for the Oceania championship, which also served as the Australian selection trial for the Commonwealth Games 20km. She improved to 1:31:26 in finishing second to Beki Smith.

Two months later again, Montag is the Commonwealth champion. It is a bewildering rise from promising junior to Commonwealth Games gold medallist. Bewildering to us, that is: Montag seems to take it all in her stride.

A brilliant student, a taster of many sports, Montag has landed on her feet at the 20k. No doubt a home championships is an ideal place to make a big-time debut, but the manner in which Montag performed on the Currumbin Beach circuit suggests she has more to come, perhaps much more.  Her own sights are set firmly on Tokyo 2020.

On Sunday morning, Montag seemed to be suffering a little from the excitement of it all when she went straight into the lead alongside training partner Barber (the pair also spent two weeks training before coming up to the Gold Coast). That impression did not fade when the field took right on five minutes to cover the first 1km lap.

But as the pace picked up, so did Montag. Indeed, soon she was doing as much of the driving as her more experienced companion. Soon she was in the lead alone, but before much longer she was chased down by Claire Tallent, who attempted to immediately put a gap in her younger teammate. Montag responded though and it looked as if we would have a race to the finish to match that between Dan Bird-Smith and Tom Bosworth in the men’s event.

Devastatingly for her, however, Tallent got her third red card (she had picked up two earlier) with just over a lap left to walk. Montag, who had never dropped more than a few paces behind, went back into the lead and on to take the gold medal in 1:32:50. Her teammate missed out, but training partner Barber hung on for the silver medal.

Walks returned to the Commonwealth program here after being dropped in Glasgow four years ago. It was a decision which cost Australia, which has now won nine of the last 11 men’s gold medals available and six of the seven women’s gold medals.

Organisers rolled out a red carpet for the finish at Currumbin. Australia should reciprocate for our race walkers.

Dane Bird-Smith’s win in the men’s race was expected, but not without its drama. He was sick when the national trial came around but, rather than pull a ‘sickie’, as he undoubtedly could have, he walked anyway. It was a rougher than expected recovery, and Bird-Smith paid tribute to his wife, Katy Price, for putting up with him through it. But he turned up here fit and healthy again, though carrying slightly heavier burden of local favouritism with the withdrawal of Sally Pearson.

Bird-Smith went to work from the gun, leading pretty much all the first half of the race. Then he won a dramatic battle with Bosworth which had the large crowd – many of them seemingly bearing the Smith surname – cheering him on wildly. With just over a lap to go, it looked as if Bosworth might win, but Bird-Smith surged away off the last 180-degree turn to claim the gold medal.

Since his bronze medal in Rio two years ago, Bird-Smith has had the minor frustration of walking a little faster for slightly diminished results. Though he broke Nathan Deakes’s Games record, it was marginally slower than his best. But who cares. He is the Commonwealth champion and beat a very strong field to get there.

The afternoon at the track wasn’t quite as fulfilling for distance fans. The 5000 was one of those muddling affairs which turns into an ears-pinned-back charge for home. Joshua Cheptegie of Uganda ran 5:03 for the last five laps and surely under four minutes for the last mile to claim the gold.

Again, not all that fast, but who cares. Stewart McSweyn finished a creditable fifth, Morgan McDonald eighth and David McNeill 12th. If it is any consolation to McDonald, his 13:19.05 at the national championships is likely to remain the stadium record in perpetuity as the stadium reverts to AFL home base for the Gold Coast Suns after the Games conclude.