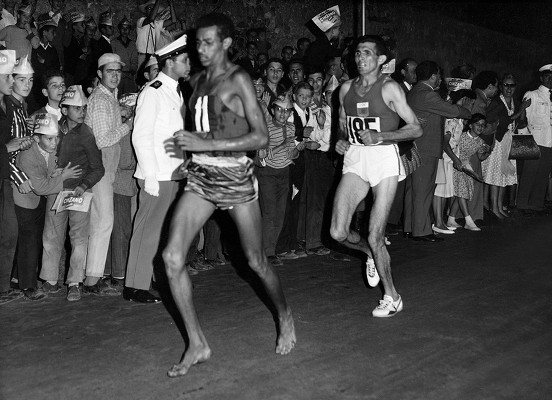 Some readers may be familiar with The Goon Show, an inspired BBC radio comedy program of the day based on the vivid imaginings of Spike Milligan – the grandfather of modern British comedy – as interpreted by Milligan, Harry Secombe and Peter Sellers.

One episode concerns a mysterious epidemic of exploding boots. The first victim is Major Denis Bloodnok, the disgraced and disgraceful (if he cared to admit it) army officer voiced by Sellers.

The Bloodnok boots explode on the dance floor. “Great naked kippers! Me boots have exploded!,” he cries.

Eliud Kipchoge took the explosion of his running shoes last Sunday in Berlin with far greater equanimity. Widely-published images show the insoles of Kipchoge’s racing flats flapping around his ankles from early in the race.

“It wasn’t a good day for me in these shoes,” Kipchoge seriously understated, “although they’re actually very good. I tested them in Kenya but just had bad luck on the day.”

This was Kipchoge after the race, after he had won in a personal best and world lead 2:04:00. If this was his reaction when the problem happened, then he really is blessed with Zen-like equanimity.

The first thing to ponder is how much the mishap cost Kipchoge. He ran 2:04:00 in some degree of discomfort, how much faster might he have gone under normal circumstances. Maybe not much faster at all; he did run a personal best after all. But you would assume a time far closer to Dennis Kimetto’s world and race record 2:02:57.

The case of Kipchoge’s exploding shoes, or absconding insoles, calls to mind other great shoe disasters. The nearest comparison I can think of comes from Quincy Watts in the 400 metres final at the Stuttgart 1993 world championships.

Watts had won the Barcelona Olympic title the previous year. Stuttgart brought him together against world record holder Butch Reynolds and Michael Johnson. Watts was up with the leaders on the home turn when his shoe literally started coming apart.

As in the Kipchoge incident, the Watts one involved custom-made Nike shoes. Tom Hartge, Nike’s then marketing manager for running, could not recall a similar incident.

“I didn’t sleep much,” said Hartge of race night. Nor was he consoled by the fact that the first two finishers, Johnson and Reynolds, also had worn customized Nikes. “It really drove me crazy. Our shoe was not up to the level of Quincy Watts as a performer. For me, it’s embarrassing.”

Not as embarrassing as an athlete throwing your shoes away. Both cases so far have involved shoes rejecting, as it were, the athlete. My next three favourites all involve the athlete rejecting the shoes.

Most famous was Abebe Bikila in the Rome 1960 Olympic marathon. The legendary marathoner padded barefoot past Rome’s ancient monuments and along the Appian to win Ethiopia’s first Olympic medal.

Bikila, according to The Olympic Marathon, by David Martin and Roger Gynn, rejected shoes not once, but twice. The shoes he had trained in gave out on him in the Village, then a potential replacement pair from a local shop (shoe company reps apparently did not come to athletes in those days!) proved unsuitable.

So Bikila ran and won barefoot, adding a further exotic touch to the already exotic phenomenon of his country’s emergence on the Olympic stage.

The shoes Jim Bailey rejected, on the other hand, found redemption on another pair of feet.

Bailey famously beat John Landy at the Los Angeles Coliseum in the run-up to the Melbourne 1956 Olympics then infamously said he could do it again any time they raced. A scholarship holder at the University of Oregon (coached by the legendary Bill Bowerman), Bailey came home to win a place in the Australian Olympic team but had a shocking Olympics, failing to make the final of the 800 metres and not running the 1500 heats.

Disillusioned, Bailey threw his brand new adidas runners into the bin of the room he shared with Dave Power at the Olympic Village.

Power asked if he could have them, instead. “Sure,” Bailey replied, “they’re no use to me.” Two years, and many patch-ups, later, Power won the Empire Games marathon wearing Bailey’s discarded shoes.

Zola Budd didn’t reject specific shoes, the South African-born runner rejected all shoes during her brief time as a British representative. She ran barefoot in the controversial Olympic 3000 metres final when America’s darling Mary Decker tangled with Budd and fell while trying to push through on the inside to take the lead. Budd finished seventh, but had better fortune winning the next two world cross-country titles barefoot.

Then there’s the lost shoe. Losing a shoe mid-race is normally a bad thing. Most recently it happened to Jenny Simpson in the final of the women’s 1500 metres at the world championships.

Other times it can be a good thing. Moses Tanui lost one at the bell in the Stuttgart world championships 10,000 metres when Haile Gebrselassie trod on his heels. An enraged Tanui kicked the shoe right off before heading off in hot pursuit of the great man. He didn’t quite catch him, but he did run one of the best last laps ever against ‘Geb’. At the finish, Tanui retrieved the shoe and brandished it menacingly in Gebrselassie’s face – but that’s another story.

Finally, two favourites emerged in researching The Landy Era. The first was finding out that Australian 1936 Berlin Olympic 800 metres finalist Gerard Backhouse once found himself stranded after a party and ran home from Mt Eliza to East Malvern – some 50 kilometres – in his street clothes. You can bet his shoes were on the point of exploding.

The other swings on blindly emulating what champions do – or, rather, what you think they are doing. Like many young runners Geoff Warren was in awe of sessions the great Emil Zatopek reportedly did in army boots – in the snow.

Warren couldn’t conjure up snow in suburban Melbourne, but he did dig up some army boots, proceeding to run sessions of repetition 400s, a ‘Zato’ staple, in them. He wondered why his feet were hurting until he came across a photograph of the ‘boots’ Zatopek wore – finely made parachute boots, they were, more akin to basketball shoes than heavy leather boots. He quickly reverted to his original footwear.

So, if you’re going to run a mile in any of the shoes described above, best go for Eliud Kipchoge’s, flapping insoles and all. At least they’ve got 2:04 marathon potential.