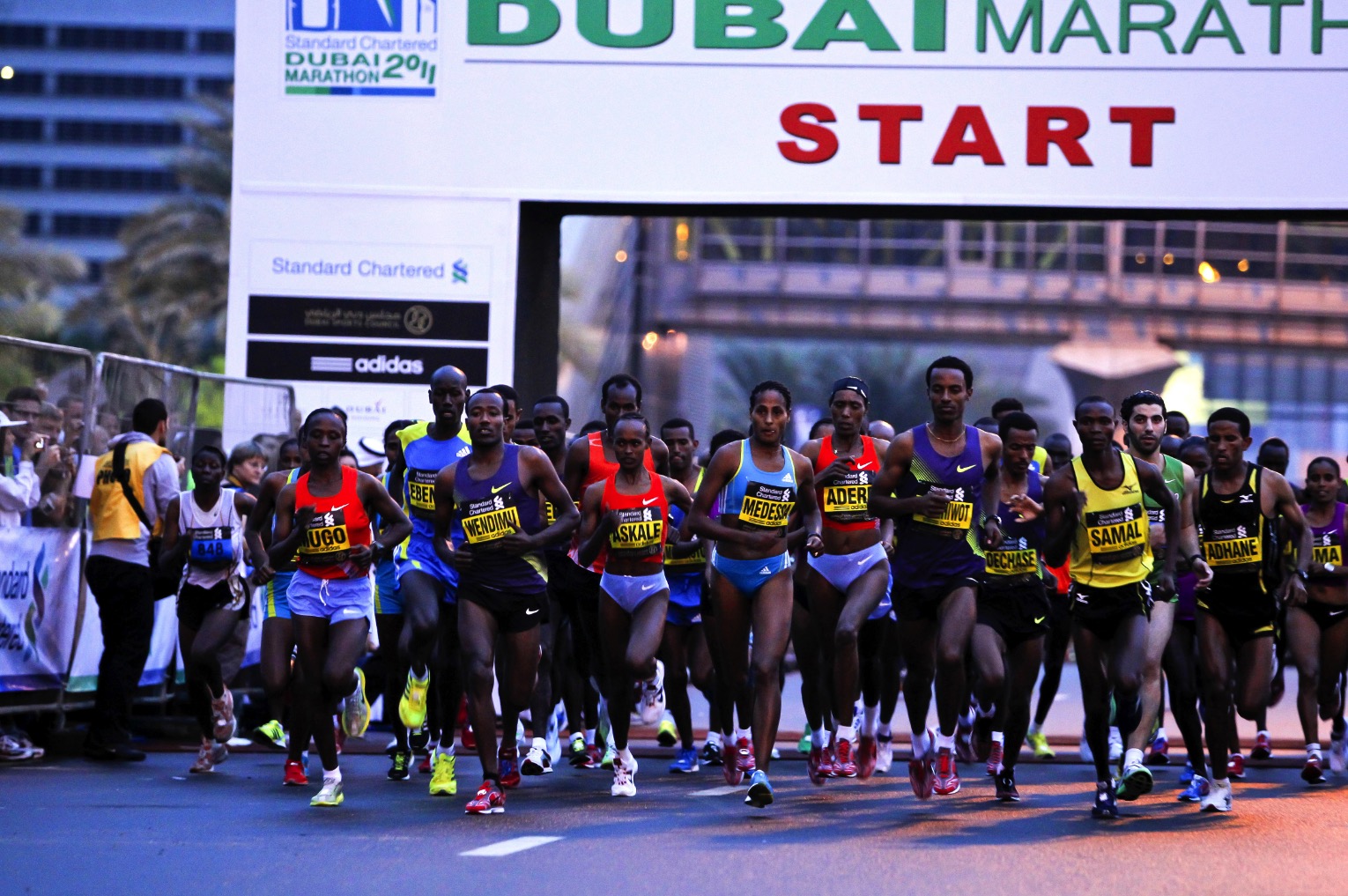 The Dubai marathon has been going 20 years now. It’s about time I made up my mind about it.

For most of those years, Dubai has produced outstanding times. The 2019 edition certainly did – Ruth Chepngetich of Kenya’s 2:17:08 was the third-fastest marathon ever by a woman. In second place, Worknesh Degefa relieved Tirunesh Dibaba of the Ethiopian record with her 2:17:41.

The men’s result was almost as spectacular. Getaneh Molla, making his marathon debut, won in 2:03:34, making him the sixth-fastest ever, with the ninth-fastest performance. Molla needed pretty much every second of that – he broke away from fellow-Ethiopian Herpasa Negasa with just 700 metres to go. Negasa ran 2:03:40 (eighth all-time, 11th-fastest performance), taking a massive 5:34 off his previous best.

Three men ran sub-2:05; the first three women were under 2:22. Amazingly, this is not a best-ever for combined depth. Pat Butcher, who did television commentary on Dubai with Paula Radcliffe, provided a revealing statistic in his race preview: there have been only three marathons in history in which four men went sub-2:05 and six women sub-2:22 in the same race – and all three were Dubai.

The ‘stats’ are there for Dubai, alright. Some of the world’s best have run the race, too – Haile Gebrselassie, Kenenisa Bekele, Berhane Adere, Aselefech Mergia among them. So why, in the words of the Rod Stewart song, do I still look to find a reason to believe.

Primarily, I suppose, is that for most of its history, Dubai has followed a consistent pattern of producing super-fast times at the start of the year, times that for the most part are not backed up later in the year and performances that are not backed up at the major championships. Impressive as it is (and with a couple of notable exceptions), Dubai form has not held up through the rest of the year.

Secondly, over time Dubai seems to have become not so much a race as an Ethiopian time trial. Last year, 15 seconds covered the first six men – from 2:04:00 for winner Mosinet Geremew to 2:04:15 for Birhanu Legese. Such a narrow margin between six runners at the end of a marathon is usually not a sign of fierce head-to-head racing.

Ethiopian males have won 14 of the 20 editions, the last 12 on the trot. It’s the same overall figure with the women’s race, only Chepngetich’s victory broke a string of 12 consecutive Ethiopian triumphs.

In 2019, the first three men were Ethiopian, and eight of the first nine. Chepngetich was followed in by seven Ethiopian runners in the women’s race.

The pace then slowed to 14:59 for 35-40 as Molla, Negasa and Asefa Mengistu presumably turned their attention to winning rather than maintaining the pace.

Of course, most marathons are a combination of hard racing mixed with cruising on a sustained pace. Think back to Eliud Kipchoge’s 2016 win in London where he and Stanley Biwott slowed past 30km as they duelled with, then dropped Kenenisa Bekele with a series of surges before Kipchoge picked up a sustained pace again to finish just outside the world record in 2:03:05.

The following year, a couple of big names turned up in Dubai. Haile Gebrselasie won the race in 2:04:53, just 27 seconds slower than his own world record at the time. Berhane Adere, the gold medallist in the 10,000 metres at the 2003 world championships in Paris, slashed almost five minutes off the women’s record with victory in 2:22:42. Four years later, Mergia gave Dubai its first women’s sub-2:20 with a race record 2:19:31.

Since 2008, it has been Ethiopian dominance both at the top, and in depth. Gebrselassie won the next two editions for three on the trot; not until this year and Chepngetich did Dubai see another male or female non-Ethiopian winner.

It would be churlish to suggest that Dubai has not produced memorable performances year on year: I’m certainly not going to fall into that trap. Equally, it would be unwise to suggest staking the house on the Dubai winners to wind up as the year’s number one.

Dubai certainly gets the marathon year off to an exciting start, setting a standard for others to chase. Perhaps the simplest answer to the question of how much importance we should place on it is that we should just enjoy it for what it is and then watch the rest of the year unfold.