Home A Column By Len Johnson Long wait for a bite of the Big Apple – A column... 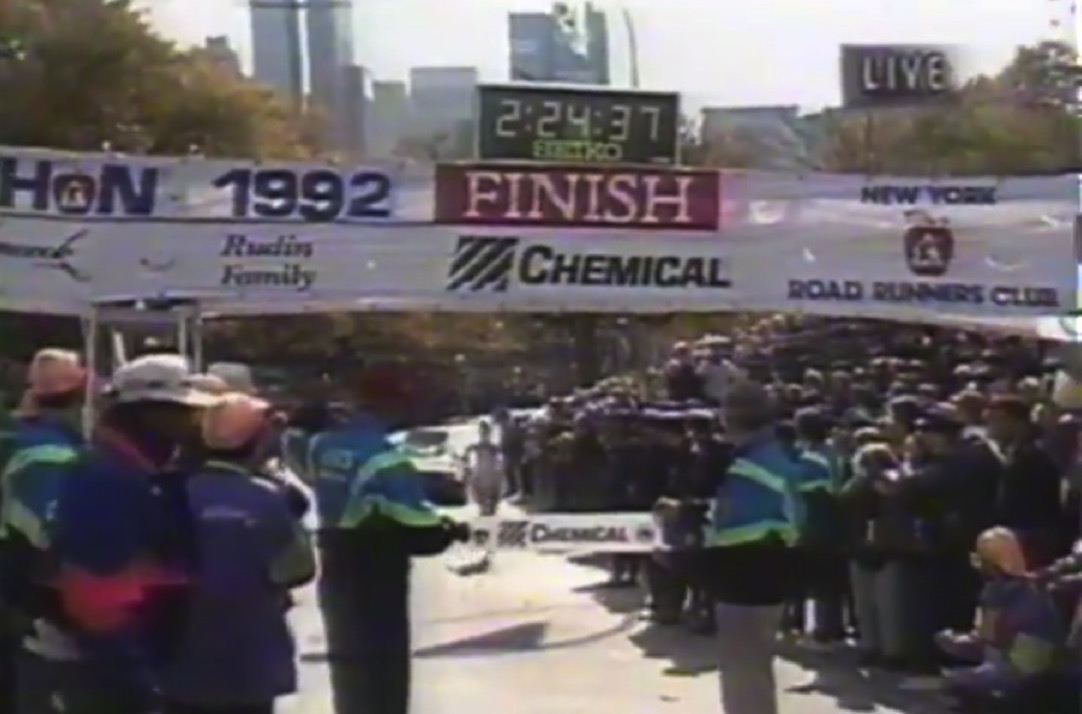 Lisa Ondieki took a long time to get a decent bite at the Big Apple. When she did, she almost swallowed the thing whole.

A friend of mine received a social media message this week that 23 October was the anniversary of Rod Dixon’s dramatic victory in the 1983 New York Marathon. That was the one when debutant marathoner Geoff Smith led for most of the race before Dixon collared him in the last few kilometres around Central Park. You may remember the dramatic picture of Dixon dropping to his knees on the rain-soaked road surface, both arms raised in triumph.

That prompted me to look up New York Marathon history which, in turn, led me to realise that this year is also a milestone anniversary for Lisa Ondieki. It is 25 years since she won the 1992 marathon in course record time of 2:24:40.

Ondieki’s time still stands up in New York marathon history. Kenya’s Margaret Okayo reduced the record to 2:22:31 in 2003, but only the fabulous four comprising her, Paula Radcliffe, Firehiwot  Dado and Mary Keitany have ever run a faster winning time in the Big Apple, and it is quicker than any winning time by the equally-handy quartet of Grete Waitz, Allison Roe, Ingrid Kristiansen and Tegla Loroupe.

Two outstanding features of Ondieki’s 1992 performance were that it represented a triumph for both persistence and resilience. Persistence, in that it was the Australian’s fourth bite at the Big Apple. On three previous occasions – 1985, 1986 and 1991 – she had finished in the runner-up position. Resilience, because it was a bounce back from the physical and psychological devastation of her DNF in the Barcelona Olympic marathon just a few months earlier.

Kurt Fearnley has won the men’s wheelchair five times, but Ondieki’s is also the only able-bodied Australian win in the race which became the benchmark for the big-city marathon when Fred Lebow convinced the New York Road Runners Club and the city of New York to free it from the confines of Central Park in favour of a course taking in all five boroughs of one of the world’s truly iconic cities.

Trying to add a third win for the year after taking out Boston and the Commonwealth Games marathons, Rob de Castella instead finished third in 1986, while Benita Willis and Kerryn McCann are among other Aussies to have tried unsuccessfully to make it on the streets of New York.

Of Ondieki’s three second-place finishes in New York, two were to Grete Waitz and the third to Liz McColgan. Neither of these two were mugs: Waitz was the first world champion in the event – in Helsinki in 1983 – and the Olympic silver medallist. She won New York a record nine times, setting new world bests on each of the first three occasions.

McColgan was world champion over 10,000 metres when she won in 1991 off the back of that track gold medal in Tokyo a few months earlier.

The 1985 race followed just a week after Olympic champion Joan Benoit had taken the women’s world best down to 2:21:21 in Chicago. Hopes of a similarly quick time in New York were dashed when the day turned out un-seasonally warm. The men’s winning time was a modest 2:11:14.

Ondieki stuck with Waitz for 10 miles, before finishing just over a minute behind her, 2:28:34 to 2:29:48. “I figured that if I maintained a steady pace she might come back to me,” the Australian said after the race. “But she was just too good.”

When McColgan, making her marathon debut, beat Russian Olga Markova and Ondieki to win the 1991 race. It began to look as if the Australian was fated never to win the event.

That impression was even stronger when the field for the 1992 race toed the line on the Verrazano Narrows Bridge high above Staten Island. Ondieki had experienced an interesting year, to put it mildly. After running an Australian record 31:11.72 for 10,000 metres in Helsinki, she went to Barcelona as favourite for the marathon.

Ondieki based herself in the Olympic city for some time before the race. The course was flat until the final kilometres when the runners claimed the Montjuic hill to the finish in the stadium. At a pre-Games press conference, she revealed she had been running up the hill at the end of her training sessions. She said it had boosted her confidence, but it sounded a bit obsessive.

Instead of entering the Olympic stadium first, Ondieki never entered it all, failing to finish. To make things worse, she subsequently alleged her drinks may have been spiked.

It was hardly the sort of experience to promote confidence in New York, but where she could have crumbled, Ondieki instead produced one of the best races of her career. Dominating from the start, she went through half-way in just under 72 minutes and slowed hardly at all over the tougher second half of the race to win in course record 2:24:40 by almost two full minutes from Markova.

Asked to rank the top five marathons of her career, Ondieki told Brian Lenton (Interviews, 1997) New York 1992 was “an easy number one.

“It was the fourth time I was trying to win after two seconds and a third. I never expected to get the record because I think it’s a slow course.”

Len Johnson has been the Melbourne Age athletics writer for over 20 years, covering five Olympics, ten world championships and five Commonwealth Games. He is also a former national-class distance runner. For nearly a decade Len has bee Runner’s Tribe’s lead columnist. Len also writes for IAAF. He has recently been named an Athletics Australia Lifetime Member.