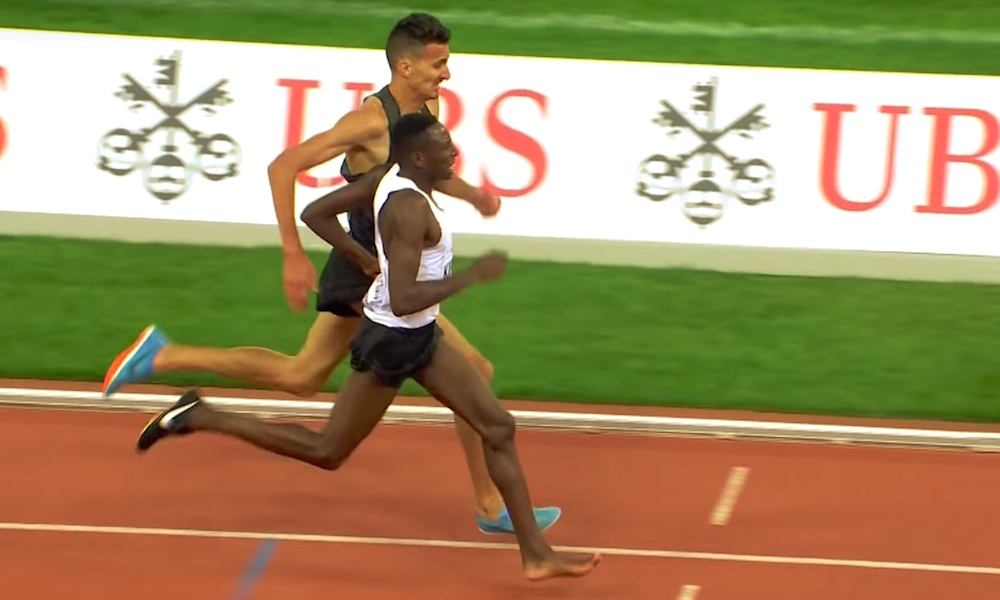 What is it about the Letzigrund stadium and the Weltklasse meeting. For the second year in a row, Zurich’s beloved boutique venue produced a memorable distance race in which the winner triumphed almost purely on their will to win.

A year ago, it was Mo Farah, down and seemingly out in the final track race of a stellar track career, somehow finding the wherewithal to hold off his world championships conqueror Muktar Edris over the final lap of the 5000 metres and win by four-hundredths of a second.

“Dominating by centimetres,” I called it then.

This time, the man who just would not lose was Conseslus Kipruto, who won the steeple at the first night of the Zurich/Brussels Diamond League final from Soufiane El Bakkali despite losing a shoe in the first lap, twice conceding a break to his opponent, losing ground at the final water-jump and trailing off the final hurdle.

Despite all that – or, perversely, could it be because of all that – Kipruto somehow got himself to the line centimetres ahead of a despairing El Bakkali. Nobody saw that coming, least of all El Bakkali, whose arms were spread acclaiming a victory which had just evaporated before his own eyes.

The margin? Wouldn’t you know it; four-hundredths of a second. Again.

The men’s steeple wasn’t the only middle-distance event on the Zurich program to feature a gripping finish. In the women’s 5000 metres, world champion Hellen Obiri produced a blistering final lap – 27.39 for the last 200 – to defeat Sifan Hassan, 14:38.39 to 14:38.77. Obiri and Hassan are two more athletes who regularly fight out races all the way to the finish line. Hassan is also one of the world’s top 1500 runners, but Obiri is no slouch as a kicker either, witnessed by her defeat of Meseret Defar to win the 2012 world indoor 3000.

Conseslsus Kipruto shares more in common with Mo Farah than a big kick. Both men are noted for winning things – 10 world championship and Olympic gold medals for Farah; one world and one Olympic steeple gold medal, and counting, for Kipruto. In common with most of those blessed with superior closing speed, they usually leave their move till late and then make winning look easy.

It’s easy to see when the natural front-runner is pushing to the limit – the Ron Clarke, Steve Prefontaine type of athlete – but it’s only in races such as the Weltklasse 5000 last year, and the 3000 steeple this year, that we get a rare glimpse of what the sit-and-kick type is made of. Both Mo Farah and Conseslsus Kipruto had to dig deep, very deep, to achieve their victories. Each had to withstand some physical buffeting, too. Farah was almost knocked off his feet by the argy-bargy going on around him in the final lap; Kipruto ran virtually the whole race with one spiked shoe, and also got a couple of severe checks as the ace slowed from a world record pace through the first 1000 metres to a relatively sedate winning time of 8:10.15.

El Bakkali ramped up the pace with several laps to run, a move which Kipruto quickly covered when others in the leading pack did not. He again gained a break in the final lap, though this time it appeared Kipruto let him go at the 300 mark, perhaps surmising – correctly, if that was the case – that he would best be served by one decisive move in the final straight. It turned out that way, though I doubt the degree of desperation he had to demonstrate in willing himself across the line in first place was in the plan.

As fans, we all love the competitions which don’t follow the predictable script. Sergey Bubka was not supposed to clear six metres to win a sixth pole vault gold medal at the Athens 1997 world championships; Mike Powell was not supposed to jump a world record 8.95 metres to beat Carl Lewis in the long jump at the 1991 world titles in Tokyo. We like it, too, when roles are reversed: Paul Tergat never went as close to defeating Haile Gebrselassie in a championship 10,000 as he did when the front-runner turned kicker over the last 200 metres of the Sydney 2000 Olympic race.

Nor is this by any means the first time Zurich’s Weltklasse has produced steeplechase performances of the highest order. I was lucky enough to be there in 1995 when Moses Kiptanui became the first man to break eight minutes (Gebrselassie followed up with a world record in the 5000).

I was there again two years later when Wilson Boit Kipketer broke Kiptanui’s world record. Gebrselassie broke the 5000 record again that night and, in a world record glut, Wilson Kipketer broke the 800 mark, too. I was sitting next to Nic Bideau in the media seats, who was filing live for the Herald Sun. He changed the lead of his story three times in quick succession. Thank heavens The Age did not have afternoon editions (and that the internet was in its infancy).

Kipruto did not threaten eight minutes. Indeed, one of the glaring gaps in his c.v. is that he is yet to do so. But he could not have more clearly demonstrated his class than he did in winning the Diamond League final on Thursday night, not even had he run a world record.

He couldn’t win, but he did: fittingly, by about the length of the shoe he had earlier lost.