Home A Column By Len Johnson Forget the samba, it’s the rhythm of the event that counts –... 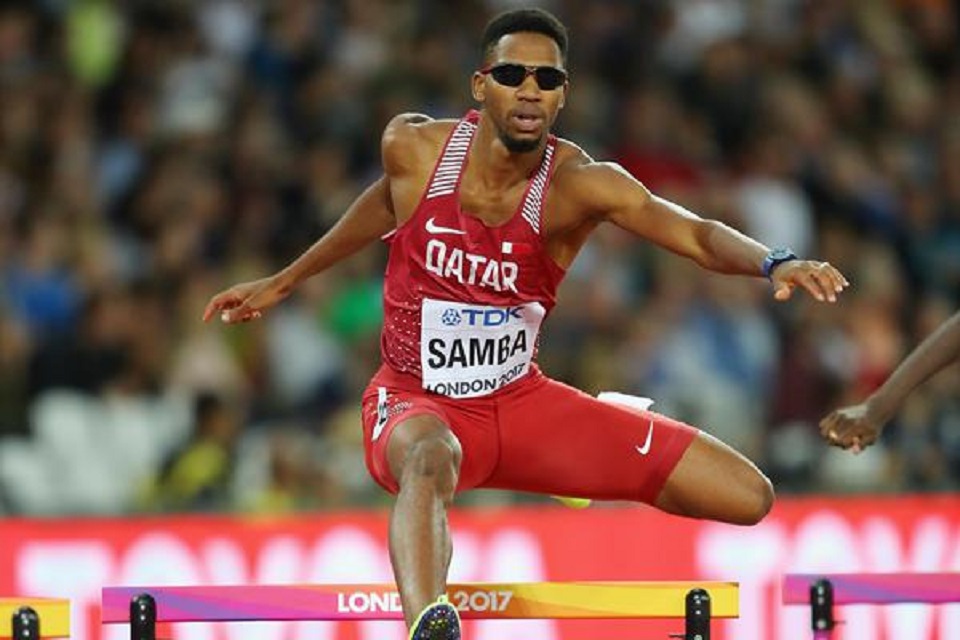 Abderrahman Samba may be on the verge of re-writing the 400-meter hurdles record books, but the headlines – not so much.

The 23-year-old Qatari – he turns 24 in September, just a few days before his home world championships commence in Doha – ran 46.98 at the Paris Diamond League last year, becoming just the second man ever to break 47 seconds in the event. The only one faster is Kevin Young, who set the current world record of 46.78 in winning the Olympic gold medal in Barcelona in 1992.

The headlines may well be shrieking Samba’s name in 72-point bold sometime this year, but it is unlikely they will be saying anything original. For sub-editors who never met a pun they were capable of walking past, he is a godsend. Just as Usain Bolt was continually referenced to the matters meteorological (‘Lightning Bolt’, anyone?), so Samba is seemingly destined to be associated with the Afro-Brazilian dance.

Samba is the high-energy dance and dance music most famously heard in Brazil during the annul season of Carnaval. The Rio 2016 Olympic marathon, indeed, finished in the city’s samba stadium, though the only endurance linked with Carnaval is of the bop-until-you-drop type.

The athlete Samba’s time at the top of his event has been relatively brief (and is still hotly contested by several rivals). But it’s still been time enough to see regular headlines of the “Samba Dances to victory” type.

Which is ironic, given that the minimum demand of Samba’s event is a constant, rather than pulsating rhythm. More modern waltz, than samba, I would say, though it must be admitted my knowledge of neither hurdles, nor music, could properly be categorised as encylopaedic.

The 400 hurdles is about stride patterns and efficiency, rather than flamboyant or pulsating movement. Tall exponents – like Samba now, Young and the all-time great of the event, Edwin Moses – aspire to getting around with a fixed 13 steps between each of the 10 barriers. If they have to switch to 14, or 15, the move is ideally accomplished with the smoothness of a synchromesh gear-box (this is not always achieved, the major factor all too often in separating winners from also-rans).

Samba has world records and world titles in his mind, and he will need all that smoothness and efficiency to acquire them. His opposition is not far behind: the American, Rai Benjamin, ran 47.02 in winning his third straight NCAA title in Eugene last year and won at the Rome Diamond League meeting this week (6 June) in 47.58.

For a contrast in style, the third man in the equation (and there could be others by the time world champs roll around), Norway’s Karsten Warholm, is more your let-it-all-rip sort of guy. Warholm attacks the hurdles like they were obstacles in a Crash Bandicoot game.

Don’t you just hate it when you cross the finish line and your shirt falls off? Yeah, me too… Happy with a win and a good season opener🇳🇴 Snakkast på Bislett😍#muchfilter #overtenning #Ineedtocalmdown

All three are young and all three are already in good form this year. Samba started with a 47.51 to take the gold medal at the Asian championships in Doha in April. Then he defeated Benjamin, 47.27 to 47.80, at the Shanghai DL on 18 May.

“I began last season with 47.9 and I finished the season with (46.98),” Samba said after his Asian championships victory, before adding that he foresaw following the same one-second improvement pattern in 2019.

Samba improved his flat 400 to 44.60 in the lead-up to the Asian championships. He may need every bit of speed he can muster as Benjamin, who is almost a full two years younger, has run 44.31 for the flat one-lapper. Benjamin trains with Michael Norman, who is carrying all before him at 200 and 400, running 19.70 and defeating Noah Lyles over the former distance at the Rome DL.

Warholm’s best is ‘only 47.64, which he ran in winning the European title in Berlin last year. But that is surely capable of faster, as demonstrated by his 47.85 win in Stockholm on 30 May, in decidedly unhelpful conditions with the temperature in the low-teens and strong, cold winds. (OK, he’s from Norway, so probably a bit more accustomed to such ‘summery’ weather.)

Warholm is the reigning world champion, having won in London two years ago. At 23, he likewise had plenty of improvement in him. One thing for certain, with his aggressive approach he will not die wondering.

Records tend to last a while in the 400 hurdles. If you’re fast enough to run a world record over the barriers, you’re almost certainly good enough to do quite well in the flat event and many of the best 400 hurdlers have been mainstays of their country’s 4×400 as well.

When Kevin Young ran 46.78 back in 1992 he broke Ed Moses’s world record which had already stood for nine years. Even so, it didn’t seem likely we would have to wait just over a quarter of a century for the next sub-47 (even less so when Bryan Bronson ran 47.03 in 1998). Now, like buses coming along after a long wait, we have two – Samba and Benjamin – who like as if they might run that fast any race soon, and a third, Warholm, who could join them.

It should be some race in Doha if they all hit the final in top form in some four months’ time.