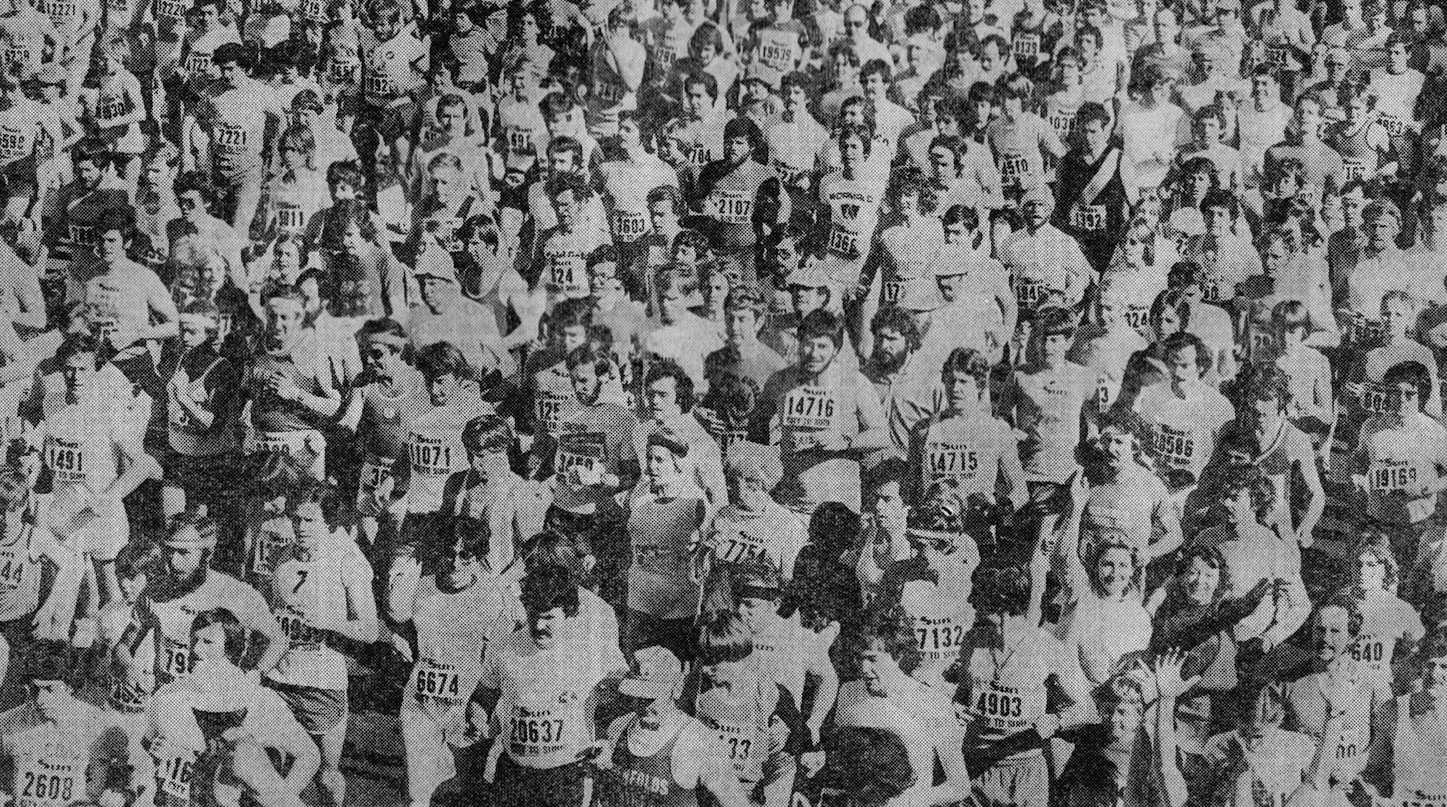 It doesn’t take much to send me racing off down memory lane. This could be because the past is the only place where I’m still running PBs.

The impetus this time came from a query as to whether I might have a copy of the 1978 City-to-Surf race results. I thought I did – it seems, at times, our house contains a copy of everything published since the Dead Sea Scrolls. An initial search proved fruitless, but I uncovered the results while searching for something else.

The query could not have been better timed. This weekend is City2Surf (note the re-badging!) weekend. Sunday (11 August) marks the 49th running of what is now claimed to be the world’s biggest fun run.

🏁 Want to view all the action from race day LIVE? 🏁 View live race day coverage on Facebook Live from 7:30am to 9:45am including guest interviews, expert commentary, on-course coverage, race winners and event ambassadors. Watch on Facebook /City2Surf or /SydneyMorningHerald 🎥 Produced by @screencraft Media

The 1978 race wasn’t famous for that, however. Nor for the fact that Chris Wardlaw won it and Liz Hassell was the first woman across the line at Bondi. No, 1978 was famous – infamous, actually – as the year of the false start. A large group of runners jumped the gun. Consequently, an ‘adjustment’ of two minutes was added to every runner’s time.

The City-to-Surf was still in its infancy then. It was just the eighth running and, after several iterations, the race had just settled on its present course. The start had originally been at Sydney Town Hall while the first few editions pre-dated the Kings Cross Tunnel. Long hair was all the go. Lycra and active wear had not yet been invented, although bizarre costumes had already made their appearance.

No allowances were made for the ‘elite’ runners. The race proudly billed itself a ‘community event’ (i.e. everyone’s on an equal footing). In any case, NSW police reportedly did not want to deal with the possible consequences of runners who had been waiting on the line for up to an hour reacting with hostility to elite runners being given priority starts. The fact that Rob de Castella, introduced on the start line as the previous year’s winner, was roundly booed suggested the police may have been right.

As a compromise to which officials wisely turned a blind eye, those eyeing a place in the first 100 would congregate at the traffic lights on the other side of the start at the William St- Park St intersection.

What could go wrong with that? Well, 1978 showed just what.

There was a false start. That’s what! Who moved first will remain shrouded in the mists of time seeing it was before the age of multiple cameras, VAR and all that sort of thing. Speaking as one of the group gathered on the traffic island, some of us thought it was runners from the official start, but pictures of the start show race officials still standing in front of the field as a few hundred ‘bolted’.

Once some went off, the rest quickly followed. A mass start is always hectic, this one even more so. Amid the chaos, ‘Deek’ had his heels trodden on somewhere between the start and the tunnel and lost critical time tugging one of his shoes back on.

Officially, blame was attached to a small group of runners. As pictures of the start from the results supplement show, however, pretty well every top runner bar de Castella beat the gun which, according to race officials, was fired immediately, at exactly (emphasis mine) 9:58, exactly (mine, again) two minutes before official start time. Hence, as is printed on each page of the results: “THERE are NO time penalties – all times listed have been adjusted from when the starter fired the gun to when you arrived at the finish gate.”

Were they? If you believe that the correct adjustment was exactly two minutes and this was communicated to the official time-clock officials and the clock was started with exactly no delay – well, let’s just say there’s a bridge not far away from the City to Surf start that I can offer you at a good price.

My informant, Andrew (full name suppressed to protect the possibly guilty), reckons he was part of a smaller group of runners “blamed” for the false start. He points out that you can see the top placegetters in the pictures – winner Chris Wardlaw, Steve Austin, Bill Scott and other future race stars including Andrew Lloyd, Paul Arthur and Quentin Morley.

The false start largely overshadowed the true race. The 1978 field featured probably every Australian male distance star other than Gerard Barrett. The pace was solid from the start and there was a race-long battle for the win between Wardlaw and Austin. Yet the winning times for men and women – 42:42 for Wardlaw, 51:22 for Liz Hassell – are still among the slowest since the course was settled in 1976.

I’ve run a few times since, but 1978 was my first experience of the City-to-Surf/City2Surf. The highlight of my day came early, sitting in my hotel room enjoying my pre-race coffee and toast while watching Dave Moorcroft beat Filbert Bayi in the Commonwealth Games 1500 final in faraway Edmonton, Canada.

I also wrote a report on the race – by-lined Len Johnson of Melbourne – for Mike Agostini’s Australasian Athletics. It was one of my first published pieces on athletics. I remember the article – and the 1978 City-to-Surf – with equal fondness.

False start or not, the die was cast. I’m still running, still writing. No recall gun. No turning back.

He is also a former national class distance runner (2.19.32 marathon) and trained with Chris Wardlaw and Robert de Castella among other running legends. He is the author of The Landy Era