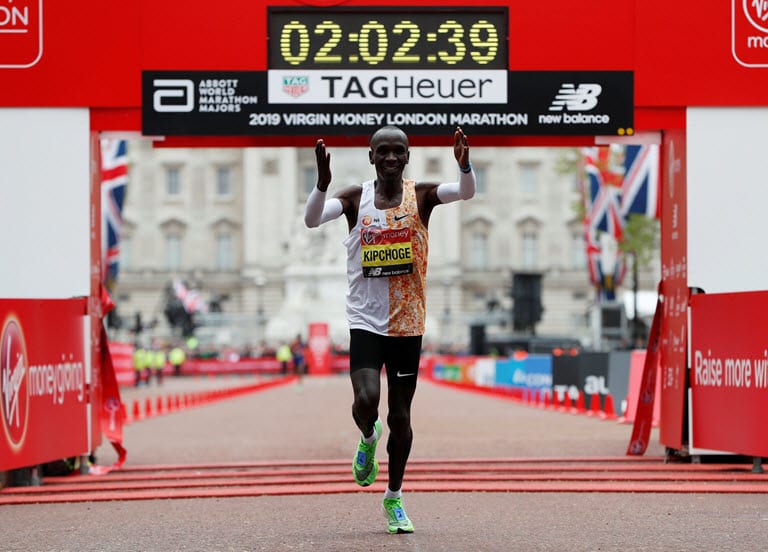 Eliud Kipchoge is re-defining men’s marathon running. An Olympic gold medal, a world record, 11 wins from 12 major marathons (12 from 13 if you include the Breaking 2 project), the last 10 consecutive – will tend to do that.

A better question might be: is Kipchoge also re-defining classical music.

Witness the observation made some 30 years ago by the great US runner Mary Liquori: “road racing is rock ‘n roll; track is Carnegie Hall.”

This might be heard as disparaging road running. Carnegie Hall (thanks Professor Wikipedia) is “one of the most prestigious venues in the world for . . . classical music.” For many years it served as musical home for the New York Philharmonic orchestra and, as movie fans will know, the actual home of African-American pianist Don Shirley, one of the protagonists of the award-winning film Green Book.

Besides, it is not even true and wasn’t even when Liqouri made the observation. As Professor Wiki also notes, Carnegie Hall was a prestigious venue for classical and popular (emphasis mine) music. The Benny Goodman Orchestra sold the place out for an historic show of swing and jazz in 1938; rock pioneer Bill Haley and His Comets appeared there in 1955 before rock ‘n roll made its most notable appearance with two Beatles’ concerts when The Fab Four toured the US in 1964.

Even so, Carnegie Hall’s history and reputation is built on its roots in classical music. It was this reputation Liquori was referencing. His intention was not to dismiss road racing, but to suggest that, as a form of distance running, it was fun; track, well, track was classical, serious.

Watching Eliud Kipchoge take over the second half of Sunday’s race was to observe someone for whom road racing is nothing but serious. Kipchoge constructs a marathon in the same manner as a classical composer constructs a symphony. It’s one whole composition comprising 42.195 kilometres, rather than a series of improvisations or a showy mix of star turns arriving (even if the ‘improvs’ and searing solos take you to the same destination).

As distinct to his (ultimately) lone effort to break two hours in the artificial Breaking 2 effort, or his long run home to the world record in Berlin last year, Kipchoge first had a race to win as London moved into its second half. He was at the head of the group following the one remaining pace-maker at half-way in 61:37. Kipchoge decided it was time to move, indicating to the others that he was about to go around the pacer and they should follow his lead (if they were able).

It soon became apparent most could not. Within a mile, albeit one run in 4:32, the group had been reduced to four – Kipchoge and three Ehtiopians, debutants Mosinet Geremew and Mule Wasihun, and last year’s runner-up Tola Shura Kitata. The move dislodged Mo Farah then, one by one, the rest were dispatched. Kitata went near 38km, Wasihun approaching 40km and Geremew, the most tenacious, was dropped at a water station just past that point.

Ironically, Kipchoge deviated across the road to collect his drink bottle while Geremew went straight ahead, which must be one of the rare cases in marathon history where the runner who collects their drink tactically outsmarts the one who does not. Anyway, the break was made and – well, you know the result. Kipchoge took his fourth London win in the second-fastest ever performance, 2:02:37; Geremew deservedly became just the third man under 2:03, and second-fastest ever, with 2:02:55; Wasihun was third in 2:03:16.

Through it all, Kipchoge maintained perfect rhythm and almost-perfect composure. A couple of times puffing his cheeks, or flicking away a bead of perspiration – such were the only, tiny, outward signs of physical tension.

Impeccable rhythm is one of Kipchoge’s strengths, to be sure. Style is not all-important – neither Emil Zatopek, nor Paula Radcliffe ever ran a race in which, even for a stride, they looked the smoothest runner; one journalist wrote of Rob de Castella: “his arm action looks as if he’s tearing jungle undergrowth out of his way” – but it is an asset. Where de Castella, for instance, destroyed opponents with a savage surge, Kipchoge imperceptibly turns the screws until they break. It was the same when Farah, Kitata, Wasihun and Geremew dropped – one moment there, the next, the string had snapped.

Kipchoge, of course, comes from a track background. His victory as a teenager in the 5000 at the 2003 world championships ahead of El Guerrouj and Bekele is well known, less commented upon is the fact that he won two more Olympic and one world medal at that distance. He persisted with until 2012, going to the marathon still relatively young and, importantly, still hungry. Gebrselassie, Bekele and, now, Farah, have all waited later, already replete with track gold medals and not much left to prove.

Kipchoge is clearly at one with the marathon and, to paraphrase the old Supremes’ (pop) hit single, whenever he runs one, we hear a symphony.

Brigid Kosgei was more conventional, but just as decisive as Kipchoge, in winning the women’s race. After a ‘slow’ first half, led to half-way by Sinead Diver in 71:22, 16 seconds clear of the pack, Kosgei surged strongly, dropping all but Vivian Cheruiyot, who dropped some 20-30 metrres behind, but worked her way back up. Kosgei’s next surge was decisive, and she went on to win, 2:18:20 to Cheruiyot’s 2:20:14. Kosgei’s 66:42 was the fastest second-half split in a women’s marathon.