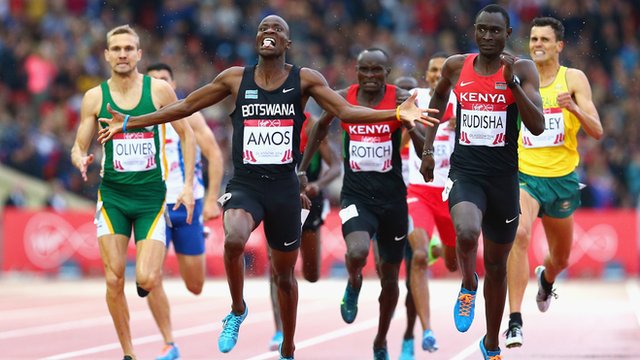 A COLUMN BY LEN JOHNSON

The theory of running rounds is that the best eight, 12 or 15 runners make the final.

The cream rises to the top, so they say. But are there too many clots being pulled up with the cream.

Two thoughts occurred to me about the track events at the world championships. First, it is getting damned hard just to get out of the first round. Whether it is the new qualification system, a desire to minimise the number of rounds, a proliferation of good (as opposed to very good) runners – whatever it is, getting out of the first round is increasingly difficult. The most glaring example was the men’s 400 metres, in which something in the very low 45-second range was needed to make the semi.

That was in a three-round format of heat, semi-final and final. In the ‘old days’ there was an extra round of the 400, as there was of the 800.

Three rounds, like the prospect of being hanged, does concentrate the mind wonderfully. One slip and you’re out. We saw it with Nijel Amos in the Beijing 800. One minute you’re the gold medal favourite, the next you’re pipped on the line for second place in your semi-final and it’s ‘Thanks for coming’ time.

That’s regrettable, but you can live with it. In the case of the 800, the trade-off for losing a round is some wonderful racing in the three semi-finals. No-one is entirely safe when only the first two go through automatically, and the two next-fastest. Almost invariably now, the 800 semis are fast and truly run.

The bigger problem as I see it is that the best eight (the 800), 12 (1500) or 15 (5000 and steeple) may not be getting through to the final. A major cause, in my view, is that too many non-automatic qualifiers are clotting up the system and that these ‘clots’ tend to conglomerate in one heat.

The extremes are easy to spot. There were two heats of the men’s 5000 metres in Beijing, the first five in each advancing to the final along with the next five fastest. Guess where those next five came from: all out of the second of the two heats.

It was a similar story in the men’s and women’s steeple heats. Three heats, the first three in each and next six fastest to go to the final. In both sets of heats the breakdown of non-automatic qualifiers was the same – none in one heat, two in another and four of the six in the remaining heat.
Picture: Heiner competing during the Australian Athletics Tour

Madeline Heiner finished fourth in the first of the three women’s heats and missed the final by one place. No fewer than seven women advanced from the next heat. Now Heiner could certainly have run better over the last 1000 metres of her heat (she went from leading to sixth or seventh before coming back up to fourth), but there is no way she ran worse than the seventh finisher in the next heat.

This raises another problem with having too many ‘time’ qualifiers. Whatever the pace of the first heat – from world record all the way down to ‘plod’ – it gives the runners in subsequent heats the advantage of knowing what they have to do.

In the men’s 5000 heats, all five advancers by time came from the second of the two heats. In both lots of steeple heats no time qualifier came from the first heat. The spread was 0-2-4 for the three men’s heats, 0-4-2 in the women’s.

Of course, the first heat can always go out faster. Sometimes, this even works. But unless it goes out really fast, the subsequent heats still have an advantage. Plus, running all-out in the heat is not always a good thing for your chances in the semi-final or final.

Only in the Beijing women’s 5000 heats was there a 3-2 split in ‘time’ qualifiers between the two heats. In both Beijing (men) and Moscow (women) all five time qualifiers came from one heat, while it was a 4-1 split for the men in Moscow.

The 800 and 1500 are a little more complicated because of the extra round, but both men’s first rounds in Moscow and Beijing were six heats, first three and six next fastest, as was the women’s heats in Beijing. There were four heats of the women’s 800 in Moscow, first three in each and next four fastest going through to two semis.

On both occasions there were three 1500 heats (first six plus next six fastest) going to two semi-finals (first five plus next two to the final).

In Moscow, the split for both men and women was three from each of two heats, none from the third.

In the 800, three of the six non-automatics came from one of the six heats in both Beijing and Moscow, while two of the four women’s heats in Moscow produced two time qualifiers, the other two had none.

Looking at advancement from semi-final to final, three of the four saw the two non-automatics come from the same semi.

No system will guarantee the finalists represent the best entrants, and only the best entrants. Luck, good fortune and being in the right heat or semi will always play a part. On the figures from Moscow and Beijing, however, that part is way too big.