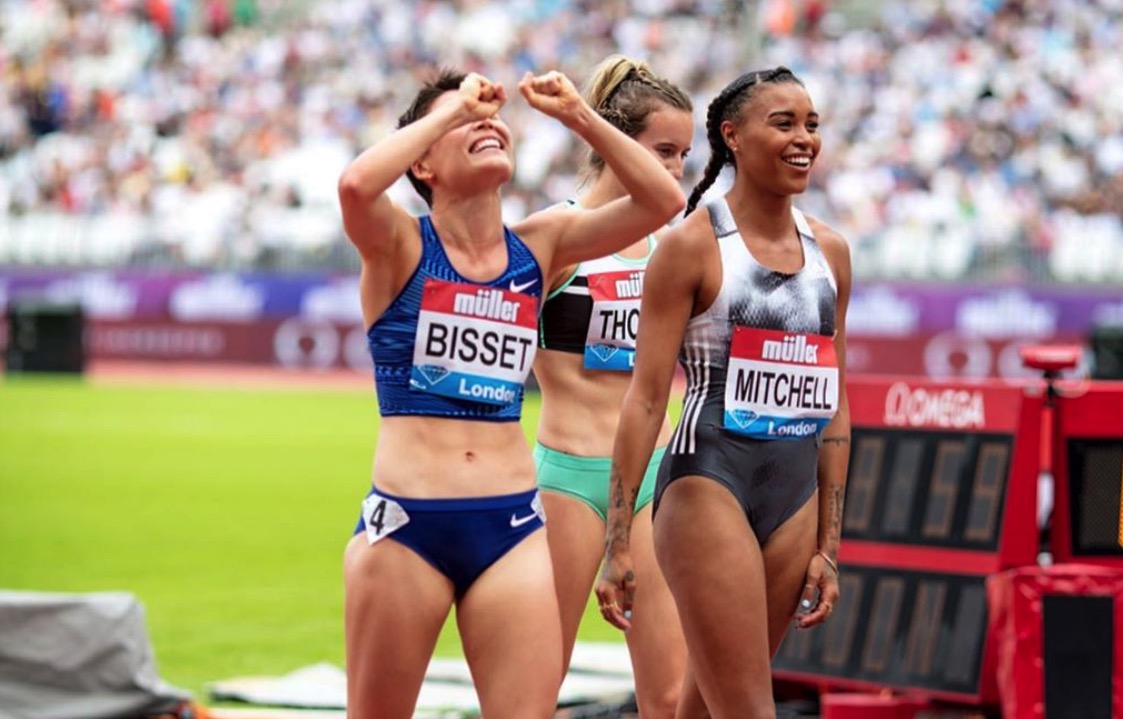 A week that begins with the smashing of an Australian record which has stood for 43 years is already a good one, but the entire month of July has been a bit of a bonanza for Australian middle-distance running.

Stretching the scale out to include the long-distance events, and bending July to include the last day of June in the northern hemisphere (when it’s already 1 July in the land down under), it begins to feel a lot like Christmas in July for Australian distance fans.

Both times represented outstanding personal bests, Mitchell’s confirming – if further proof were needed – that she has the potential to be as good, if not better, at 800 as she has been so far at 400, Thomas’s again underlining her enormous potential.

Mitchell took from Georgia Griffith the dubious distinction of being the Australian woman closest to sub-two minutes without breaking the barrier. Apart from that, the only thing wrong with her run was that it was also outside the Tokyo 2020 outright qualifying standard of 1:59.50. But it was an all-important world championships qualifier and Doha 2019 will offer a second-to-none chance of achieving the Olympic standard.

It is a deserved reward for Mitchell’s courage in switching to the longer event and joining the Liz Mathews coaching group. And, of course, like Tamsyn Manou before her, Mitchell’s talent as a one-lapper can still be utilised in the 4×400 relay. Australia, currently sitting thirteenth on the rankings, is a good chance to qualify for the world championships.

1:58 and THEN SOME♥️🙌🏾 @catrionabisset rooming and racing with you this past season has been nothing short of amazing. You deserve it all gf! 🥂

The women’s 800 on day two of the London Diamond League meeting, followed the 1500 on day one in which Linden Hall achieved the Doha qualifier with a 4:04.29. Hall had struggled through her first race of the northern hemisphere summer – at the Prefontaine DL in Stanford – with a knee problem, but all seems well now.

The ‘Pre’ was on 30 June, but it was already July in Australia when Jessica Hull produced her 4:02.62 to place seventh and rocket up to fourth on the Australian all-time list behind Hall, Sarah Jamieson and Marg Crowley.

Back to day one in London, however, and Stewart McSweyn (13:05.63), Patrick Tiernan (13:12.68) and Morgan McDonald (13:18.91) all achieved the world championships standard in the 5000 metres. For McSweyn, it was further confirmation of the form which had produced a 3:31.81 – second-fastest ever by an Australian – at Monaco a week or so earlier. Better yet, he was a factor in the race, finishing fourth, just a stride out of third place.

Tiernan, too, was with the leading group of eight with 500 metres to run. His 13:12.68 was a personal best and hopefully indicating a return to the form which took him to the final of the 5000 at the London 2017 world champs.

Things could get complicated for the final selection for the 5000 in Doha as national champion Jordan Gusman has the standard, too, and is automatic should he wish to run. That would leave two places for three athletes, though McSweyn is qualified at both 1500 and 5000. Happy days, nice problem to have should it arise.

A similar conundrum could be faced in the 1500 where national champion Luke Mathews is yet to qualify, while McSweyn, Matthew Rasmden and Ryan Gregson already have. At 3:31 and 13:05, McSweyn doesn’t have a problem whichever event(s) he decides to run.

In the men’s 800, Peter Bol produced a 1:45.56 qualifier in Barcelona, to join Mathews as a qualifier. As a qualifier, and national champion, Mathews is automatic in this event should he run, but his efforts are directed at the 1500 at the moment. National record-holder Joe Deng remains without a qualifier – so far, but we can add Bol to the list of July gift-givers.

In women’s steeple, Rosie Donegan ran two qualifiers in ‘Australia’ July to stake her claim for selection in that event, while marathoners Julian Spence, Rochelle Rodgers and Melanie Panayiotou were named to the Doha team.

Compliments of the ‘Christmas in July’ season to all of them.

The other eye-catching announcement this week was the IAAF decision to grant Gold Label status to the US Olympic trial marathons. The first five finishers in a gold label race are considered to have achieved the performance standard for the Olympics, thus this decision guarantees that one-two-three in the US Olympic trial marathons will get to the Olympics, regardless of their performances or rankings points.

Naturally, the decision was greeted with delight in the US distance running communities, as indeed it should be. Good luck to them, too: it’s a favourable offer you can’t refuse. And with the Olympic marathon quota cut to 80 in each field, roughly half the numbers who lined up in Rio 2016, marathon-mad Tokyo needs all the runners it can possibly get.

On the face of it, the IAAF decision seems to compromise both the label road race system and the rankings system, the latter even before it has come into operation. IAAF label road races are, in theory at least, open to all competitors. The US trial is a closed race, and will waste four of its 10 allocated direct entries to the Olympics as only the first three men and women will be selected.

No other country gets this privilege. Nor does any other event at the full US Olympic trials which, presumably, also involve athlete preparation, pre-existing commercial commitments and TV broadcast arrangements.