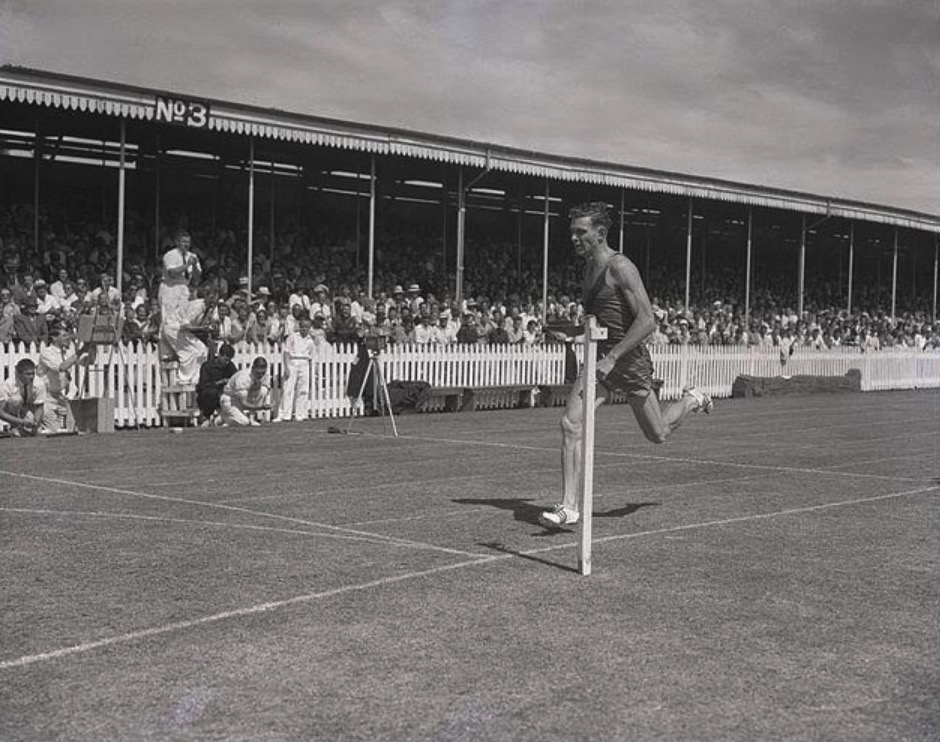 At the Muller Indoor Grand Prix in Birmingham last weekend (16 February), Joseph Deng set an Australian record in winning the 800 metres in 1:47.27.

According to the records section of Athletics Australia’s website, the mark Deng bettered was the 1:47.48 by Ryan Foster in 2010. All well and good, but the site separately lists Ralph Doubell’s 1:47.9 for 880 yards in Alburquerque even further back in 1969.

Of course, the 0.7 factor may be fine as a general rule, but it is clearly not applicable to each specific performance. For one thing, someone running a 1:40 800 generally takes less time to run an extra 4.667 metres than someone running at 1:50, or 2:00 pace.

Turning to the IAAF handbook on world record progression provided a little more confusion, Back in the day when the British Empire (and the USA) raced over imperial distances, I looked for instances when the 800 world record was broken en route to 880 yards.

Peter Snell, Rick Wolhuter and Jim Ryun (among others) all did that. Only Snell (or Arthur Lydiard, or Kiwi officials) had the foresight to ensure there were three watches at both 800 metres and 880 yards when Snell broke the world records in Christchurch.

It took 50 years for any Australian middle-distance runner to better Ralph Doubell’s Mexico City Olympic gold medal winning performance of 1:44.40 (1:44.3 hand) as the national record. Could it now be that he still holds the indoor record, and has done for 50 years.

Again, the official answer is ‘no’, as Doubell’s time at 800 in his Albuquerque race was assumedly not taken. Could he have run faster than Deng remains the unanswered question.

Conversion formulae have been developed by some statisticians to accommodate the subtlety that ‘plus or minus 0.7’ doesn’t work for all performances at all speeds. Running Deng’s 1:47.27 through one those resulted in a 1:47.90 equivalent for 880; putting Doubell’s 1:47.9 in gave 1:47.27 for 800 metres.

Equal, then? Maybe not. We are not comparing apples with apples here. One of the formulae suggests that, where a manual time is being compared to an auto time, the manual time should first be ‘adjusted’. The standard adjustments are 0.24 seconds for 100 and 200 metres, 0.14 for 400. There is no standard adjustment for 800, but assuming the 400 one is the better approximation, 1:47.9 becomes 1:48.04.

Given how close it is between what Deng did run in Birmingham on 16 February and what Doubell may have run for 800 on 25 January, 1969, I’d suggest the way the AA lists the records now is most apt. Acknowledge both the 800 and 880 records together, thereby bracketing both our current record holder and, historically, our highest achiever at 800 metres.

In any case, just as Alex Rowe equalled Doubell’s outdoor 800 record then Deng bettered it, but no Australian has yet equalled his achievement, so, too, Doubell remains our greatest indoor middle-distance champion.

Back in the days when the US had a thriving indoor circuit, Doubell was one of its major stars. He was one of a group of Australians – Ron Clarke and high jumper Tony Sneazwell were others – who competed regularly, along with others who were in the US on college scholarship, like Kerry Pearce, who set a world indoor record for two miles.

Doubell went undefeated in indoor competition on annual visits in 1968 and 1969. His 1:47.9 was a ‘world record’ (indoor world records were not officially recognised then), as was a 2:05.5 for 1000 yards, again at Albuquerque, the following year, that one breaking, rather than equalling, a Peter Snell record.

In all, Doubell lost just once indoors in America in five annual visits. If he loved running indoors, the Americans loved him, as the following extract from an article in Sports Illustrated indicates. The feature dwelt heavily on what the writer characterised as Doubell’s “playboy image”.

“I feel the attitude of American runners about not drinking is very strange,” (Doubell) said. Then, grinning, he added, “Most Australians do. Just last Friday I went out with my coach and we got stoned on champagne. Of course, you can’t do that all the time, just about once every fortnight.”

The theory was hardly advanced before it was put to the test, over 1,000 yards on Saturday night, and Doubell sped them in 2:06.5—just five-tenths in excess of Peter Snell’s world record—and in the doing he blew his two toughest rivals, Kenya’s Naftali Bon and America’s Juris Luzins, off the bouncing boards of the Los Angeles Sports Arena.

There’s no big west coast-US indoor meetings left. They don’t make the tracks – and, possibly, the athletes – like that any more.

Correction: in last week’s column, I wrote that Oliver Hoare’s sub-3:40 put him a full three seconds behind Ryan Gregson’s then AR, which was correct. I then added that no-one else was under 3:40, which was not. Mike Hillardt ran 3:39.77 in finishing fifth in the first full IAAF world indoor championships in 1987.

After publication, Stewart McSweyn set a new Oceania and Australian record of 3:35.10.