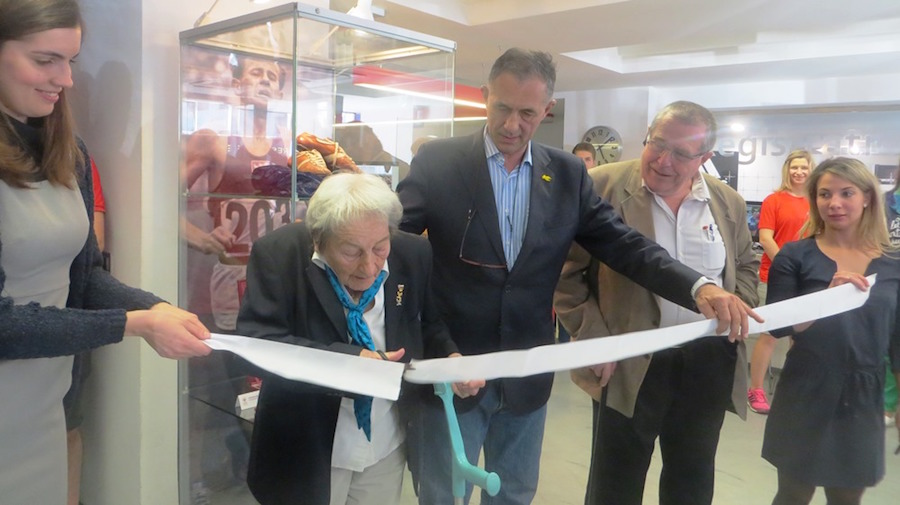 PRAGUE (07-May) — Here in the Czech capital city, there are certain figures that loom larger than life. Franz Kafka, the literary mastermind whose work is known worldwide, is immortalized by a statue and museum in the city center. But in the world of athletics, no Czech comes close to the legacy left by the great Emil Zatopek, the “Czech locomotive”.

A four-time Olympic gold medalist, Zatopek is remembered for his greatness on the track and roads, spurring the Czech distance running movement forward. In 1952 at the Helsinki Olympics, Zatopek completed the distance triple crown, winning the 5000m, 10,000m, and the marathon (the final event in his debut at the distance).

As the story goes, the Volkswagen Prague Marathon would never have gotten off the ground had it not been for Emil Zatopek and his wife, Dana Zatopkova. As RunCzech president Carlo Capalbo has described here numerous times, he approached friend and fellow Italian Gelindo Bordin –the 1988 Olympic Marathon gold medalist and 1990 Boston Marathon champion– in the 1990s with the idea of a marathon through Prague. The pair then took their concept to Zatopek, meeting at his home along with Zatopkova, an Olympic javelin gold and silver medalist herself.

By the time Capalbo and Bordin left the Zatopek household that day, the Prague Marathon course was set. Zatopek had drawn up a course that touched all of the main attractions within Prague, a route that showcased the city’s elaborate architecture and history.

An ambassador for the sport both domestically and abroad, Zatopek passed away in 2000 at the age of 78. The Volkswagen Prague Marathon was only six years old then, still developing into what it would become today: a worldly marathon that welcomes 10,600 athletes and 101 nations to the Czech capital for its 22nd running tomorrow.

On Friday, less than 48 hours before the starting gun fires, an exhibit dedicated to Zatopek was opened at Running Mall, a running center located between the two most popular running parks in Prague. Running Mall is a place where locals train, learn about the sport, shop, and relax; it also houses the offices of RunCzech, and has served as the inspiration for similar running centers in Boston and New York.

On display at Running Mall as part of the Zatopek display are the spikes that the Czech wore en route to his 1952 Olympic golds on the track, as well as personal medals, photos and mementos dedicated directly from the Zatopek family.

Cutting the ceremonial ribbon to open the exhibit was Zatopek’s widow, Zatopkova. At a spry 94 years old, Zatopkova was all smiles exploring the exhibit, seen for the first time on Friday. Pictures of her with Emil, including one from the Helsinki Games with the pair sharing a kiss track-side after Emil won gold, serve to educate and inspire runners throughout Prague. The public is welcome to visit Running Mall for free, where they can shop, utilize the locker rooms, treadmills, showers, and weight machines, then relax at the cafe or play ping pong on the lower level.

Sitting down with Race Results Weekly and other media, Zatopkova spoke not only of what it means to be part of such an exhibit, but how special it is to watch the race which her family helped found take off and become one of the premier marathons in the world.

“Today is very nice and very pleasant,” said Zatopkova, speaking through a translator. “First thing that I think when I see the photos is that it is bad that I am too old [now] and cannot do anything [athletic]! I have [had] a very beautiful life, a very beautiful sport life, and I am very happy with it. The Czech Republic, we are a very little country, small country, and I am very happy that we could do such big things in the world of sport and Olympic sports. Our small country has a gold shine around.”

Zatopkova, whose 1952 gold medal in the javelin laid the framework for Czech success in the discipline, remembers one moment with her husband quite vividly.

“The most beautiful memory from Helsinki was after [Emil’s] race, when everything finished, sitting during the night after the race by a lake and having my medal and playing with it, and thinking that I am a winner and I could make it after Emil had the same achievement [winning gold],” she said, a twinkle in her eye. “Everything was so beautiful that day, I couldn’t even imagine it could finish like that. It was a fairy tale.”

Interestingly, Zatopek and Zatopkova were both born on the exact same day, September 19, 1922. They are likely the only husband-and-wife duo in sports history to each have an Olympic medal and be born on the same day.

Now Zatopek and Zatopkova’s medals reside in a national museum. Too many people over the years had touched the medals that the shine on them turned from gold to silver (medals were simply covered in gold; not solid gold). “People were touching the gold medals so much that it lost all the gold on it… we put it to repair and from that time it is in the museum!” she said with a laugh.

Yet plenty of archives and artifacts are on display at Running Mall to give visitors a trip back in time. The spikes which Zatopek wore, for instance, feature large metal prongs molded directly into the bottom of the leather soles. Rarely can one see such early footwear.

“What is the most and visible thing is now there are 10,000 people who are enjoying the sport and moving, going a little bit back to nature and society,” she said. “This kind of movement in sport — thanks to Carlo that he came at the right time and created this kind of event in Prague [meaning both the marathon itself, and the exhibit].”

“What is important is when people finish the race they will feel great and that they can mentally be better and feel better at the end.”

Attended by some of the leaders in the running industry, including Dr. Paco Borao, President of AIMS (the Association of International Marathons and Distance Races) and elite manager Gerard van de Veen, the representative for Dennis Kimetto, Wilson Kipsang, and Geoffrey Mutai, among others. The exhibit will continue to play host to runners through next week.

“Carlo is exaggerating a bit, as always,” Zatopkova said, drawing laughs from the crowd. “The great support of the Zatopek family is behind the Prague Marathon, and it is a great honor from Carlo Capalbo because this is what he made for Prague and the Czech Republic.”