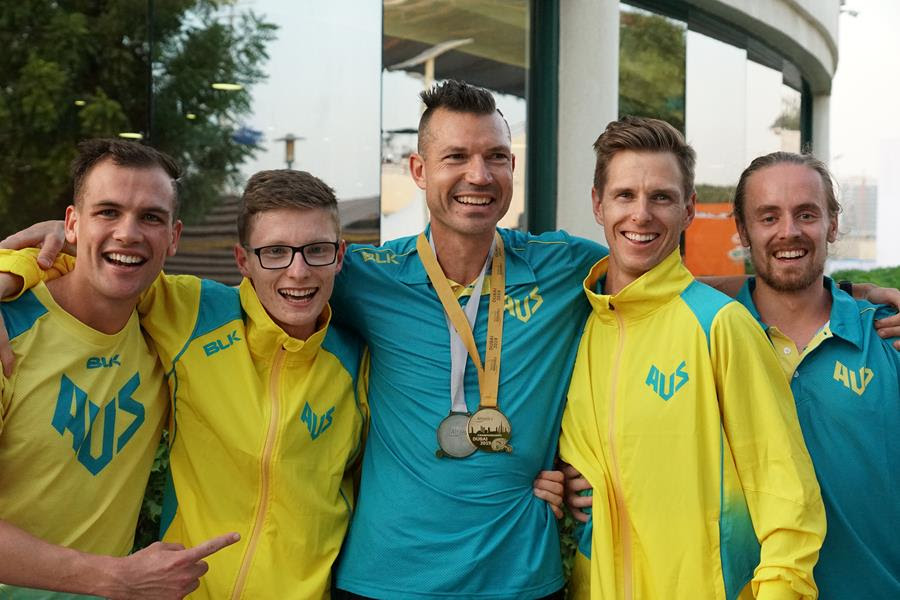 ‘Advance Australia Fair’ sounded throughout the medal plaza for the first time at the Dubai World Para-Athletics Championships, when Jaryd Clifford received his 1500m gold medal on Friday night.

And the very next ceremony had Clifford’s training partner and Australian teammate Michael Roeger collect his silver medal for the same distance in his arm amputee class.

A large band of Australian athletes, coaches, staff and family members were on hand for the double celebration – something Roeger was beaming about since he had to overcome a disqualification protest to get hi silver result resinstated.

The medal ceremonies were held before the evening session of Day 2 of the 9th World Para-Athletics Championships in Dubai.

And for four Australian wheelchair athletes in Sam Carter, Luke Bailey, Angie Ballard and Eliza Ault-Connell the found in a very tough night at the office, finishing out of the medals.

Carter learned a hard lesson in racing, when he fell agonisingly short of the podium – fourth in the men’s 100m (T54) final – or just 0.02sec from the bronze medal.

The 28-year-old had a scorching heat time of 13.94s, which would have won him gold as Friday night’s winner Leo Pekka Tahti from Finland clocked 13.97.

“It all just didn’t come together today like it did yesterday,” Carter said. “Basically from leaving the hotel to the track I was just a bit off.

“I am disappointed to have missed out on a medal by a very small increment. As always I’m honoured to be competing in such an incredible field against guys who have been my heroes for quite a while.”

Teammate Luke Bailey finished 7th in the 100m final in 14.55s, again slightly slower than he produced in Thursday’s heats and semi-finals.

“I was a bit angry at the start. The officials were questioning me about my footplate (under his wheelchair) being so close to the ground,” Bailey said.

“I shouldn’t have let it get to me. I still felt I raced well; felt I was quick of the line and I stayed with everyone the whole way.”

Ballard, competing in her eighth world championships, was slightly faster than her heat time in the final of the women’s 100m (T53) final, but placed 7th in 17.44s.

“I had better energy tonight – not quite enough to stick it with the front runners,” Ballard said.

She doesn’t have much time to toss the race over in her head as she backs up for the heats of the 400m on Saturday morning.

“I think the longer distance may suit me a little better… we’ll see. I’ve got to get recovered so I can get back here tomorrow morning.”

Ault-Connell, who has one of the heaviest schedules in her return to the world titles since 2006, was 5th in the women’s 100m (T54) final.

“That was a little underwhelming tonight. I felt great in the warm-up, felt good before the start but just didn’t have my best race,” Ault-Connell said.

She has the 800m final Saturday night and the 1500m heats on Sunday. And there’s still the 400m and 5000m to come next week before the championships finish on November 15.

And in the final event of the night, Sam McIntosh placed 7th in the men’s 400m (T51-52) heats to miss out on qualifying for Saturday’s final.