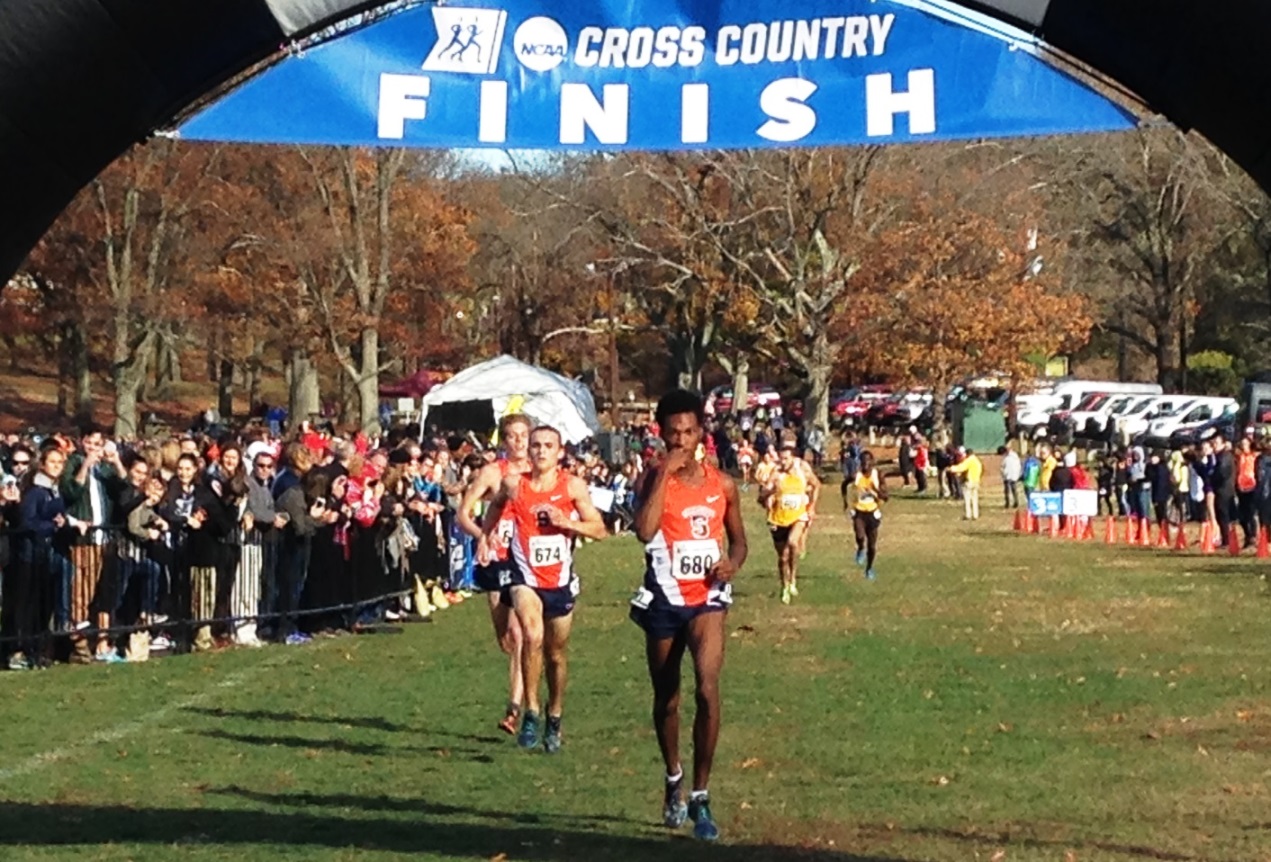 LOUISVILLE, KY (20-Nov) — Martin Hehir, Coach Chris Fox, and the rest of the Syracuse Orange men’s team enter tomorrow’s NCAA Cross Country National Championships here feeling self-assured. They possess not a cocky swagger nor a boisterous enthusiasm, but rather a mature focus. Put simply, the Orange are ready for tomorrow’s competition, and know that this is the moment they’ve been building towards for several years.

“We’ve come a long way just in the last few years, but especially this year,” said graduate student Hehir, who hails from Washingtonville, N.Y., a northwest suburb of New York City. “It’s kind of the culmination. I’ve been here for five years, and this is kind of what it’s come down to.”

The Orange enter these championships as a podium favorite, though are up against tough teams like two-time reigning national champion Colorado and perennial challenger Stanford. Don’t call the Orange an underdog, though: rallying behind Coach Fox, a former elite runner with world championships experience and a refreshingly blunt delivery, the team has taken on a persona all their own.

Early this season, before the leaves changed color and the NCAA rankings began to take shape, Fox spoke with gusto and honesty about his team’s chances here. At September’s Boston College Battle in Beantown, Fox sported a coy grin knowing exactly what his team was capable of. He said the squad had taken on a professional mentality, a hard-nose upstate-New York work ethic where they came to practice every day ready to put time and effort in. At the end of the year, the team expected to get a trophy and redeem themselves from past NCAA Championships disappointments. They finished fifth last year with 206 points and tenth in 2013 with 329. In 2012, the last time this meet was here, they were 15th with 405 points.

Fox reiterated the goal just last week after winning the Northeast Regional meet in Boston, a glint of optimistic excitement in his face. He knew the team was progressing as planned, but didn’t want to be overly confident for fear of becoming complacent.

“We wanted to come in here and see if we could score 30 points,” Fox told Race Results Weekly. “I was proud of them… I’d like to get a trophy. I told you that a long time ago, that I want a trophy and anything from [nationals] is a bonus. We’ve been waiting four or five years to get a trophy, so it’s very important to us. We seem to be in a really good spot, and we’ll definitely take a shot.”

Now that the championships are less than 24 hours away, Fox and Hehir are within reach of the coveted wood and gold trophy. At today’s press conference here, both sat within five feet of the prize. Yet not once did this writer see them eye the trophy. Instead of gazing at the hardware, they kept their eyes on reporters in the gallery. It was as if neither wanted to risk being distracted this close to the event.

“As for expectations, Coach Fox has said it: we definitely need to get a trophy this year,” said Hehir, the most upbeat and enthusiastic of all the male student-athletes appearing today. “We’ve fallen short the last couple years, but everyone’s here for the same reason.”

Hehir said the reason this team stands out from the rest is because of experience, talent, and the persona that Fox has instilled in each and every one of his athletes. A runner who competed in the 10,000m at the 1995 IAAF World Championships and was the top American at that year’s Falmouth Road Race, Fox knows what it takes to reach the upper echelon of the sport. Yet he had to work many, many years to achieve peak fitness at the late age of 36-years-old.

“I think if you ask anyone on our team, the way he handles everyone,” Hehir began, speaking with an audible tone of praise for his coach. “It’s unlike a lot of programs. It’s a lot less hands on in terms of he trusts us to make a lot of decisions about how we’re feeling and how our bodies are when it comes to going for easy runs. Just the amount of pressure he puts on us is properly placed. When you want to show up for a hard workout, that’s when he expects you to show up. Going along with that, the way everyone believes in the program and the way we all hear what he has to say and that’s what gets done.

Referring to his mentor’s experience, Hehir added: “He’s not one to dote on [his running] and throw in stories all the time, but we love asking him questions now and again about what he used to do. We’ve learned some surprising things like soda pop and candy bars before some racing. Old school style!”

For many years –in particular this fall– Fox has stressed the importance of pack running. Syracuse has thrived this fall because of their ability to stay together and crank the pace up a notch in the last two kilometers of races. That’s what they did to win the BC Battle in Beantown, Wisconsin adidas Invitational, ACC Conference Championship, and Northeast Regional meet. With an ace like Canadian sophomore Justyn Knight complementing Hehir’s experience and sophomore Collin Bennie’s consistent improvement, the Orange have become a feared title contender.

Most important of all, they enter this meet with momentum after placing their top five within a 23-second spread at the Northeast regionals.

“I think kind of the key for us is Marty Hehir,” Fox said. “He’s kind of the heartbeat of our team. He’s had a couple of really bad ones here [at NCAA’s] for various reasons. But, he’s kind of come into his own the last year, become a really great track runner. He’s fifth year, he’s kind of focused. As he goes, our team will go. He kind of guides the younger guys along and the energy comes from him.”

Hehir believes it is more about the team as a whole, and their ability to complement one another. Rounding out the nationals team are Joel Hubbard, Dan Lennon, Philo Germano, and Shawn Wilson.

“As for our team mentality, we’re going to run like we’ve run all year which is to run as a pack, and when it gets time to get going, everyone knows where we got to be,” said Hehir. “If that’s our top three guys going, doing what we’ve been doing, and our four-five doing what they’ve been doing, then we’re just going to make sure it happens.”

While a majority of the questions asked at today’s press conference were aimed toward Colorado’s Pierce Murphy and Oregon’s Edward Cheserek, Hehir sat and smiled. This is his last go around, and he’s prepared to make it his best.

The Orange have had three letters embroidered on their cross country clothing all year long: TCB. The letters stand for “Take Care of Business,” what the team prepares to do on Saturday. Whether it is a top-three trophy or the coveted national title, they’ll be sure to perform their best when it counts most. Syracuse last won a men’s team title at these championships when Harry Truman was in the White House, back in 1951. They’ve finished runner-up three times, but all before the 57-year-old Coach Fox was born –in 1954, 1949, and 1947.

“Everyone wants to run with their team for as long as possible. That’s where a lot of confidence comes from,” Hehir said. “We’re racing everyone that’s going to be out there tomorrow. We might be seeing black and red a little more than the other colors [meaning Colorado and Stanford]. But we’re just going to run just like we run any other race — run it and try to win. It’s pretty simple.”