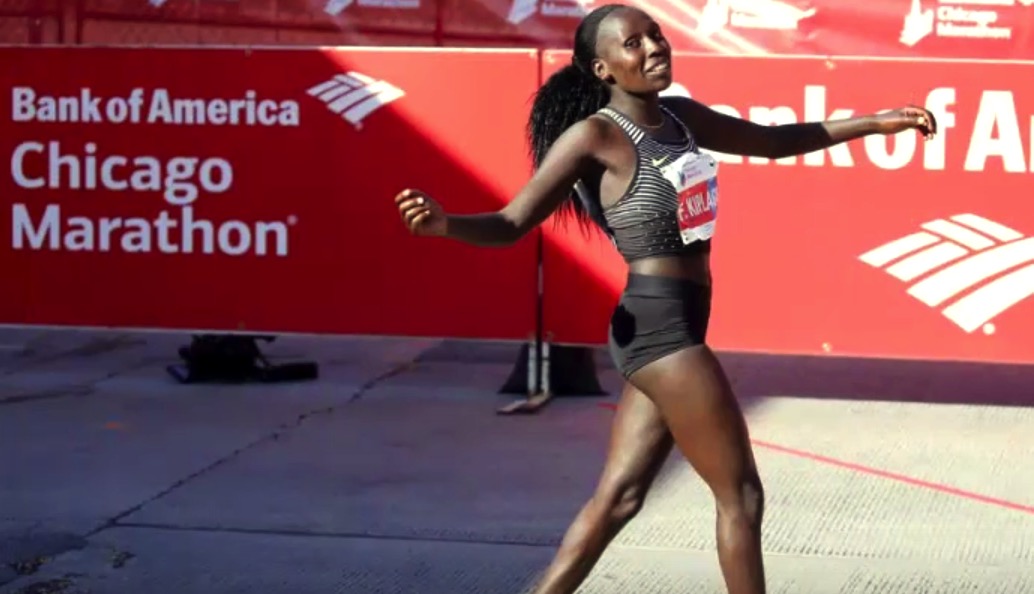 CHICAGO (09-Oct) — On a picture-perfect fall day here, Kenya’s Abel Kirui and Florence Kiplagat won the 39th Bank of America Chicago Marathon using completely different tactics.  Kirui, twice the world marathon champion, survived a slow and unevenly-paced men’s race to win in 2:11:23, the slowest winning time here since 1993.  Kiplagat, the defending champion, blew away the women’s field with a powerful surge past the 30-K mark to win by about two minutes in a fast 2:21:32.

Both athletes won $100,000 in prize money at this Abbott World Marathon Majors event, while Kiplagat pocketed an additional $10,000 time bonus for breaking 2:23.

Like last year, Executive Race Director Carey Pinkowski did not employ pacemakers, and the elite men and women collectively made very different decisions on how to approach the race.  The men went out at a painfully slow pace of 16:06 for the first 5 kilometers (about a 2:16 pace) while the women hit the same split less than a minute behind in 16:56, about a 2:23 pace. The die was cast.

Moreover, the men’s pace was uneven.  There were several surges by Kenya’s Paul Lonyangata, followed by entertaining chases where Lonyangata swerved across the roadway to try to shake compatriot Gideon Kipketer.  None of these moves did anything to break of the race, and a huge lead pack of 20 men lumbered through 10-K in 32:04.  That group was only whittled down to 14 by the halfway mark (1:06:51).  All of the main contenders were still on contention, including defending champion Dickson Chumba, Olympic 10,000m bronze medalist Micah Kogo, top American from last year Luke Puskedra, Lonyangata, Kipketer and Kirui.

Meanwhile, the women decided the cool, sunny and only slightly windy conditions were too good to waste on a slow pace.  Seven women –Kenyans Visiline Jepkesho, Florence Kiplagat, Edna Kiplagat, Purity Rionoripo and Valentine Kipketer, and Ethiopians Yebrgual Melese and Atsede Baysa– ran clustered together, clocking honest 5 km segments of 16:56, 16:43, 16:31 and 16:37 through 20 km.  Only Baysa, who endured a fall, was dropped by half-way (1:10:29).

“It was good running,” Florence Kiplagat said later.  “I set the pace faster than I thought (but) I was comfortable.”

Incredibly, the men would slow down further.  With no athlete willing to take up the pace, they jogged from 25 to 30 km in 16:13, with Kirui sharing the lead of a still too-big pack of 12.  Kirui was itching to go faster, but he vowed to his Italian coach, Renato Canova (who also coached Florence Kiplagat), that he would stay with the group.

It was at the same point, 30-K, that Florence Kiplagat decided she had waited long enough. She blasted away from the field, covering the next 5 kilometers in a snappy 16:17, nearly as fast as the men’s slowest split.  In an instant, every other woman was running for second.

“Florence was so aggressive from 30 km because she knew the course,” said Edna Kiplagat, who would finish a distant second in a still-credible 2:23:28.  “So I tried to pick up my pace.”

But for Kirui, the race was only beginning.  Just before 35-K, Lonyangata made another surge which took the lead pack from an even dozen to only four at 35-K: Chumba, Kipketer, Kirui, and Lonyangata.  Kirui, who won back-to-back world marathon titles in 2009 and 2011, was ready to respond, but didn’t want to go too early.

“So In my mind I know that something is going to happen,” Kirui recalled.  “I was very careful to see who was going to strike.”

Lonyangata was the first to fall back, then Kipketer fell off.  Kirui and Chumba sped through the 5 km segment from 35 to 40-K in 14:45, easily the fastest of the race.  They were neck-in-neck with a comfortably 24-second lead over Kipketer.  Only one would win.

There is a small hill before the final finish straight, and Kirui used it to make his move on Chumba.  Furiously pumping his arms, he left Chumba behind, achieving a three-second gap which would hold to the tape.  Chumba clocked 2:11:26, followed by Kipketer in 2:12:20 and Lonyangata in 2:13:17.  Stephen Sambu, making his marathon debut, finished fifth in 2:13:35.

“For me, I’m very excited, surely,” said a jubilant Kirui who celebrated at the finish line with a little dance.  “It’s my first time to win a race on American soil.  That was my big desire.”

Back in 8th place, Diego Estrada of Flagstaff, Ariz., was the top American, finishing his first marathon in 2:13:56 (he had dropped out of the USA Olympic Trials in Los Angeles last February in his first attempt at the distance).  Sadly, he stepped on a competitor’s water bottle at the 10-K fluid station, rolling his right ankle.  He thought about dropping out, but couldn’t bring himself to stop.

“I didn’t know if I should drop out or continue,” a determined Estrada told the media after coming into the press room on crutches.  “I just told myself that wasn’t an option.”

Kurt Fearnley edged out in a photo finish

In a photo finish that required a check of video, Marcel Hug was ruled the winner of the 2016 Chicago Marathon men’s wheelchair race Sunday, edging out defending champion Kurt Fearnley.

RT found this amateur video of The Chicago Marathon 2016 on YouTube which is actually pretty good and captures the vibe.