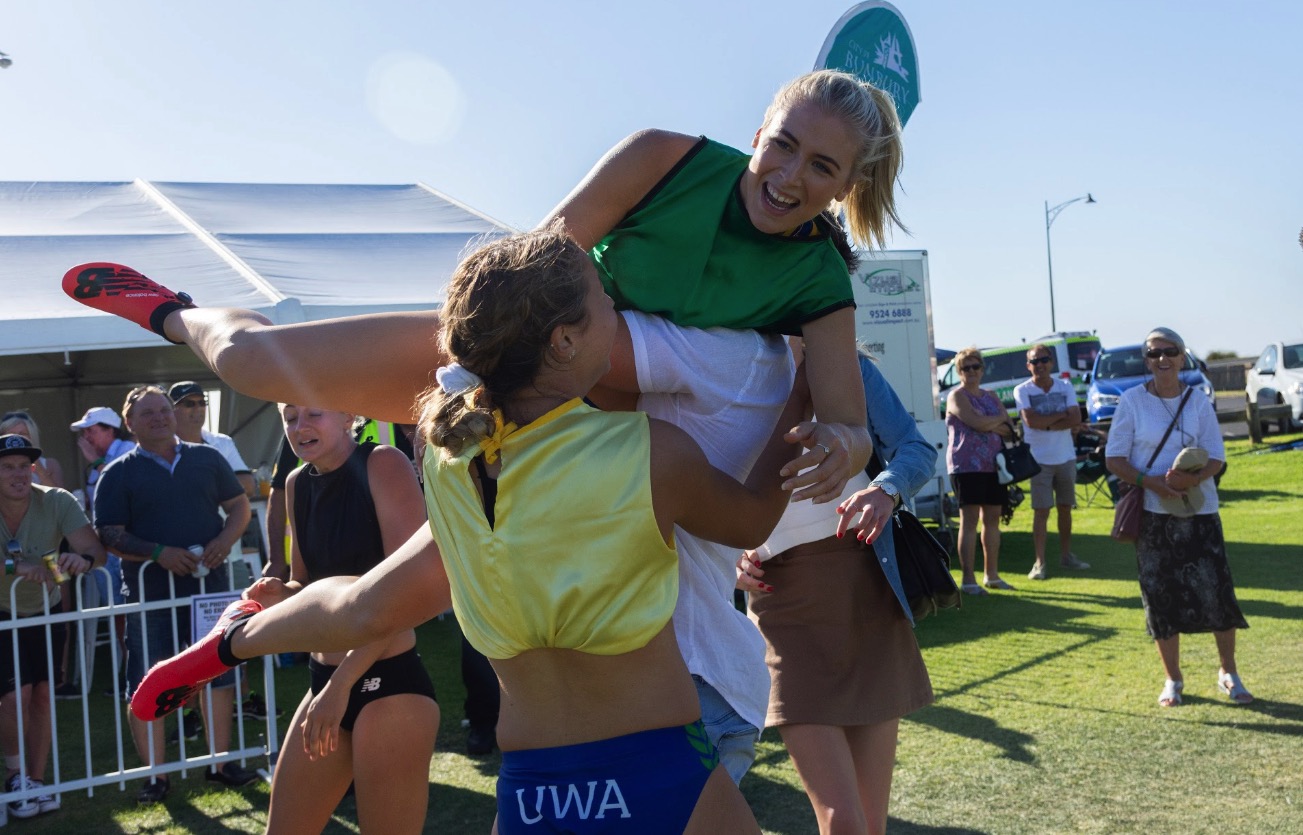 The 2019 WesTrac Bunbury Geographe Gift saw some of Australia’s best athletes descend on Bunbury to compete for a share in the $78,000 prize pool.

The WesTrac Men’s 120m and the City of Bunbury Women’s 120m, attracted strong fields with $14,000 to be awarded to the winner of each race. Eliza Wilson (7.5m) was impressive through the heats and semi-finals and took the win in 14.14, ahead of Alanah Yukich (5.75m) and Sophie Watts (7.5m) in second and third respectively.

Wilson said it was an amazing feeling to finally win a gift race and the fact it was in Western Australia’s South West made it all the more special. “It such a unique part of the world especially for a race because you’re right next to the beach,” she said of the opportunity to race in Bunbury.

“Just stay composed, just exactly what I’ve done in every other race and try my best at the start – being my strongest part of the race and finish strongly,” Cordoma said of his race plan. “The atmosphere and the crowd were just wonderful, beyond my expectations… It’s great to hear that there were 55% more athletes this year and it’s only going to larger and better”

The Qube Ports & Bulk Mile was set to be another highlight for the weekend and did not disappoint, with Australian Record Holder Ryan Gregson, and recently-crowned Australian Mile Champion Matthew Ramsden going head-to-head in the Men’s event. Ramsden emerged victorious, running 4:05.3 from a 25m handicap, with Alain Dutton in second with 4:06.6 (85m) and Ben Chamberlain third in 4:07.3 (65m).

The 2019 WesTrac Bunbury Geographe Gift achieved a 55% increase in competitors from around the country, with an estimated 4,000 spectators through the gates across the weekend. This incredible event brought an exciting weekend of racing to the heart of Bunbury and could not have achieved such success without the generous support of our sponsors.

“Due to the generosity of our wonderful sponsors, our committee was able to extend free admission for our enthusiastic patrons to our 2019 Westrac Bunbury Geographe Gift, who in turn were able to relish and appreciate the very high level of competition across the various categories of exciting races,” said Chairman Tom Dillion. “The weather was extremely favourable to our athletes, and not too uncomfortable for our spectators. The officials delivered a blemish free two days of top-quality races and everything now augers well to even bigger and better outcomes for our Gift in 2020.”

Congratulations to all competitors, support teams, volunteers and officials and we look forward to seeing you back in Bunbury for the 2020 edition scheduled for the Labour Day weekend, 29 February – 1 March 2020.