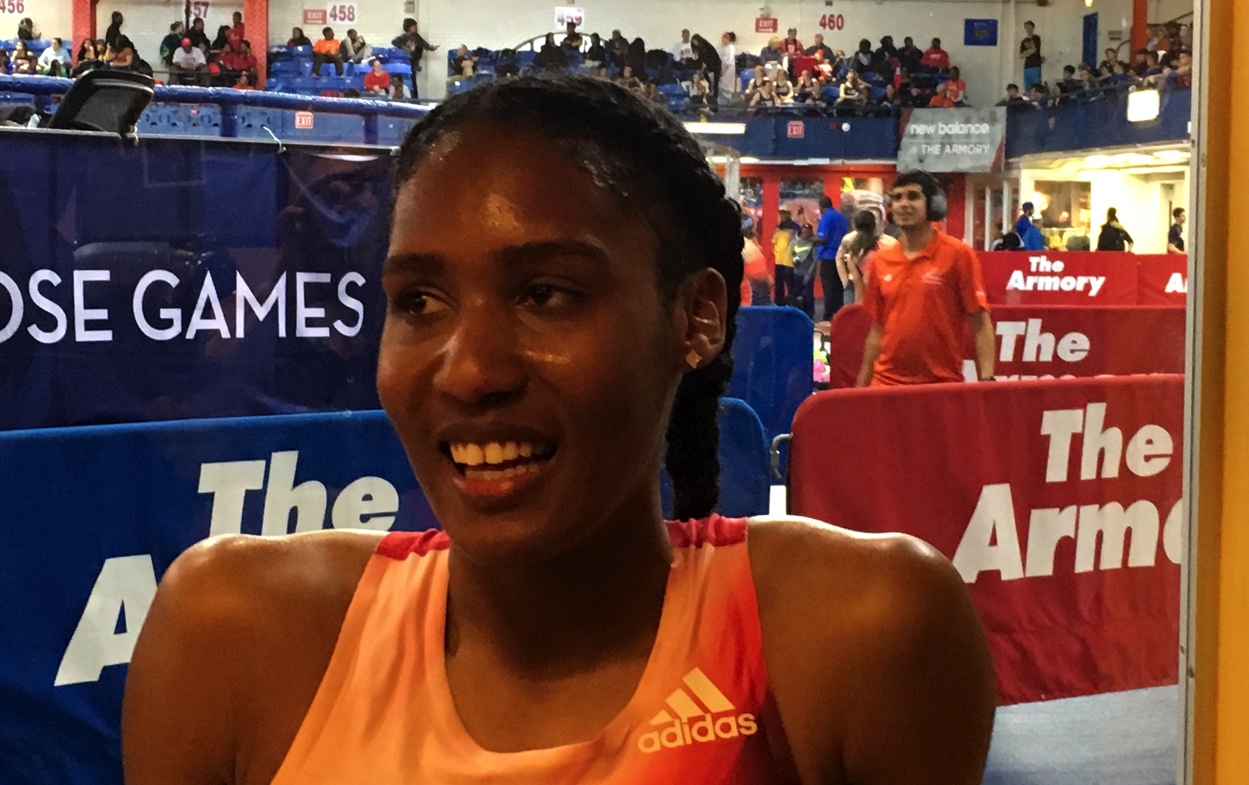 “I just wanted to use it as a time trial,” a composed Wilson told reporters just a few minutes after the race.  “Training has been going really well.  We just wanted to see where I was.”

Wilson’s 2016 campaign also had a very strong start, winning the USA indoor title before winning her silver medal at the world meet.  She went on to finish second at the USA Olympic Trials, making the Olympic team as expected, but did not advance to the final.  She later learned that she had an iron deficiency.

“I’m not really sure how that go out,” Wilson told a reporter, looking surprised.  She continued: “It is what it is.”

In the women’s invitational mile, Canada’s Kate Van Buskirk ran a solid 4:30.14 off of a slow first half (2:18) to get the win.  Van Buskirk, the 2014 Commonwealth Games 1500m bronze medalist who struggled the last two seasons with injury and illness, made a powerful move with 300 meters to go, leaving rivals Charlene Lipsey and Sarah McDonald behind.

“We were kind of off pace, and my coach and I talked about waiting for three or four hundred (meters) to go,” Van Buskirk explained.  “So, when you made the move it had to be decisive.”

While a spirited battle between Drew Hunter and Julian Oakley at the front of the men’s invitational mile played out, high schooler D.J. Principe of La Salle Academy in Providence, R.I., was running his own race, trying to become the third USA prep athlete to break four minutes indoors.  Principe, who will attend Stanford next fall, ran an opening quarter of 59.3 seconds, slowed in the second quarter to 61.3 seconds, but got back on pace in the critical third quarter (60.2).  He knew four minutes was still possible, and keyed off of Hunter and Oakley in the final lap and kept pushing.

“I’ve never been in a field like that; it was awesome,” Principe told Race Results Weekly.  “I knew I was a little over.  I didn’t want to look at the clock specifically, but I knew I had to just give everything I had.”

“It’s an unbelievable opportunity to be in that type of race, and I just wanted to take advantage of it,” Principe said after throwing up in a trash receptacle adjacent to the track.

Hunter, who also broke four minutes as a high schooler on the Armory’s oval, was also satisfied with his race.  He wasn’t quite sure where his winter training would put him today.

“It tells me I’m in really good shape,” Hunter told reporters.  “I’m just not sharp now. So, I was really pleased with it.  I did a pretty hard workout on Monday, and I ran my last three quarters under 60 seconds.  Pretty challenging.”

In the high school invitational miles for both boys and girls, the top finishers were guaranteed a starting spot at the NYRR Millrose Games on February 11 in the same discipline.  In the girls mile, Caroline Timm of Our Lady Of Lourdes ran away from the field to win in 4:56.25, just off of her personal best.

“My goal was to go out fast because I can usually get stuck in the pack, so I didn’t want that to happen this time,” Timm told Race Results Weekly.  She added: “I was able to keep the lead and that’s all I really wanted.”

In the boys race, Ben Bulkeley of Fairport, N.Y., surged on the backstretch with about 120 meters to go, and was able to catch Joe Morrison of Arlington, N.Y., at the tape, getting the win in 4:20.71 to Morrison’s 4:20.90.  According to Armory official Tim Fulton, both Bulkeley and Morrison earned spots in the Millrose Games.