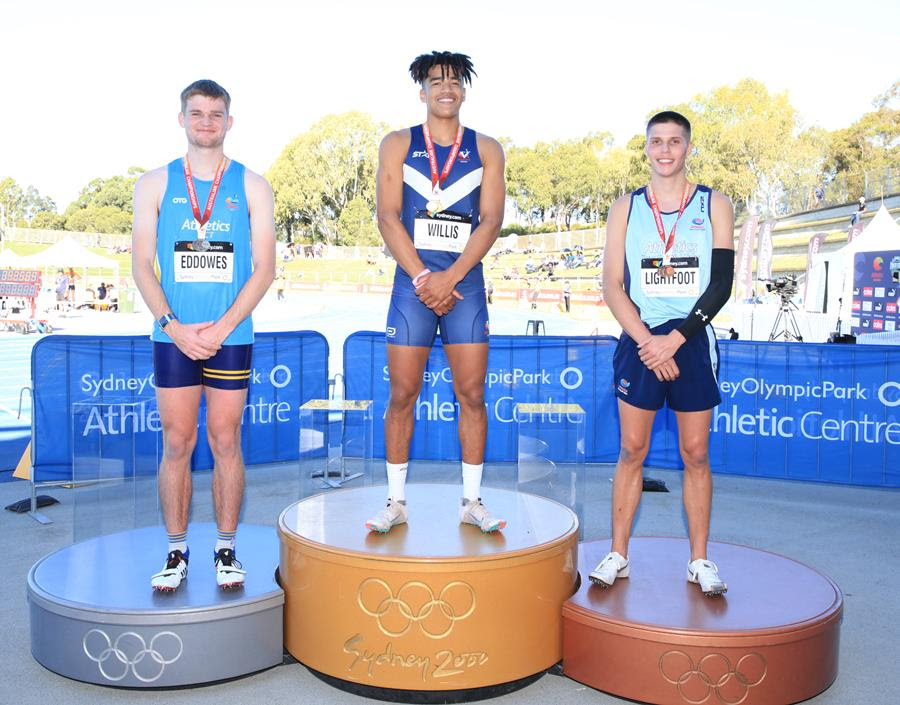 Sydney, Australia; April 13 2021 –  Boasting a social media following of over 100,000, Tayleb Willis (Vic) is a star in his own right, but it’s his progress on the track that has athletics aficionados turning their heads.

At just 18-years-old, Willis has his eyes laser focused on becoming one of Australia’s top hurdlers and he’s now one step closer after securing the national Under 20 110m Hurdles title today on Day 2 of the Australian Track and Field Championships.

Coming into the race as the sixth fastest junior in Australian history, Willis had one goal in mind – to secure the win and guarantee himself a spot on the World Under 20 Championships team.

It was a goal he achieved with ease, stopping the clock at 13.48 (+0.1) to set a new meet record and a personal best of 0.21 seconds. Willis’ result moves him up the ranks to 3rd on the Australian Under 20 all-time list.

“That felt amazing. That race is exactly what I wanted to do. Being selected to the World Under 20 Championships team has been my goal for a few years now so I’m so happy,” Willis said.

After posting 13.69 with a stiff headwind of 2.5 in Melbourne in February, Willis admits the pressure was on to lower his best, but said it was a key motivator for him as he attempts to break Nick Hough’s Under 20 record of 13.27.

“I came out here to try and get a time like that. My races in the lead up haven’t really been at the standard I thought they’d be so running 13.4 today, I’m stoked,” the teenager said.

“I knew I could do it. It was just a matter of executing my plan and putting all those hurdles together. Training this season has honestly been insane. I started in March when Nationals were cancelled last year, and I’ve just trained my absolute butt off to get big results like this.

“I’ve come pretty far from last year. I was on 91cm hurdles and my PB there was 13.52, so I’m happy to beat that on the higher height just one year later. My next goal is to try and break the Under 20 Australian record, and then after that I’ll try and medal at Worlds.”

Coming close behind Willis was Colby Eddowes (ACT), clocking two World Under 20 Championships qualifiers across his heat and final.

Improving on his 13.81 heat time by 0.1 in the final, Eddowes said he was pleased with his times but knew he’d have to be faster than Willis to win today’s title to guarantee his selection on the World U20 Championships team.

“I came in here knowing I would have to produce a top effort to beat Tayleb. He’s an awesome runner. I ended up just putting my head in the game and I ran two qualifiers in the heats and finals, which is out of this world.”

It wasn’t just the hurdlers that impressed tonight, with a number of other World Under 20 qualifiers and automatic selections taking place throughout the day.

After a rocky start, Erin Shaw (NSW) cleared the World Under 20 Championships qualifier of 1.82m to win the Under 20 High Jump title.  Unable to clear 1.72m and 1.79m on her first attempts, she put together a gutsy performance to beat Elisabeth Moss (QLD, 1.76m), and Alexandra Harrison (NSW) and Rosie Tozer (NSW) who both jumped 1.72m.

“I’m not going to lie, I was pretty stressed but I just tried to focus on that height and focus on each aspect of it and got over. My coach and I have been working on a visualisation process more recently as the heights get higher and I just try to think about how I can use the good parts of the last jump and improve the bad parts to get over that higher height.”

Taking to the track just one day after the Under 20 1500m heats, rising middle distance star Jude Thomas posted his third World Under 20 Championships qualifier, crossing the line at 3:47.44 to win gold and secure automatic selection to the team. He beat Ethan McMinimee (Vic) by almost two seconds (3:49.50) and finished ahead of Adam Goddard (SA, 3:49.53). A strong middle distance runner, Thomas also holds qualifiers in the 3000m and 5000m, and will return to the track on Thursday for the 5000m.

After qualifying first in the women’s Under 1500m heats, Jaylah Hancock-Cameron (NSW) continued her winning streak, running 4:18.40 to cement her selection to the World Under 20 Championships team.  Nicola Hogg (NSW) placed second, notching up her second qualifying time of 4:20.18.

Three athletes blitzed the men’s Under 20 400m event to qualify for the World Under 20 Junior Championships. It was Reece Holder (QLD) that prevailed, running 46.78, with Joshua Atkinson (NSW) in second place with 46.95, and Jack Boulton (Vic) winning bronze in 47.18

With five World Under 20 Championships qualifying standards already under her belt, Queenslander Lyvante Su’Emai came out with a sixth to win the women’s Under 20 shot put. Su’Emai put 15.46m, more than two metres ahead of Sally Shorkry, who placed second with a 13.45m throw. Su’Emai will also attempt to win the Under 20 discus title tomorrow.

Kodi Clarkson (ACT) proved too strong for the Under 14 3000m Race Walk event, smashing the meet record, with a time of 13:51.22 – more than a minute faster than his fastest competitor Samuel Lindsay (Tas) who crossed the line at 15:23.15.

Off the back of Jett Carlin’s results in the Under 20 hammer throw last night, Logan Sandland (VIC) proved that throws in Australia has a bright future ahead, throwing 65.20m in the men’s Under 16 event to set a new meet record.

The 2021 Australian Track and Field Championships finish on Monday, 19th April and can be streamed live and free on Seven’s market-leading BVOD platform, 7plus.