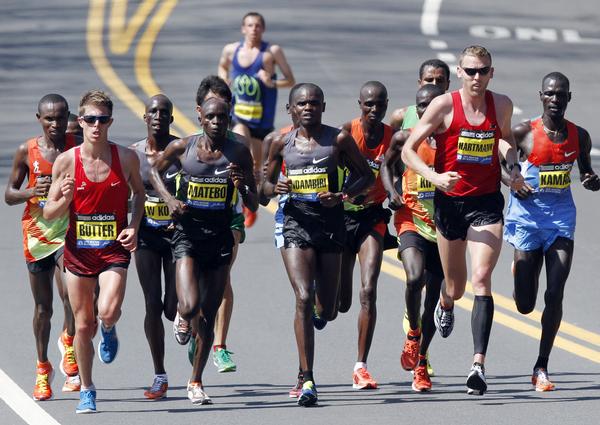 Levy Omari intends to return to winning ways in Vienna

Levy Omari has chosen Vienna as his next destination for a marathon. The Kenyan finally aims to return to winning ways in the Austrian capital on 10th April since his last marathon victory dates back to 2011. In the meantime the 26 year-old has improved his personal best to a world class 2:05:16. With this time he is the fastest in the elite field of this IAAF Gold Label Road Race and indeed one of the fastest ever entered in the history of the Vienna City Marathon. Adding other running events staged parallel to the marathon organisers of Austria’s biggest annual sporting event expect more than 40,000 entries for the 33rd edition of the race.

Levy Omari, also known as Levy Matebo, has achieved a string of fine performances in the past five years. However his last marathon victory dates back to 2011, when he took the Barcelona Marathon with 2:07:31. It was later in that year when he ran the best race of his career so far. In Frankfurt he was second with 2:05:16 in October, beaten only by Kenya’s superstar Wilson Kipsang. Omari went on to produce a thrilling race in the Boston Marathon as well. In 2012 he took the lead and looked like he would win the race. However Omari was caught in the final stages by fellow-Kenyan Wesley Korir and took second again. After a seventh place in the Berlin Marathon 2014 with 2:08:33 he had injury problems during the past year. Omari then came back with a fourth place in the Ljubljana Marathon last autumn, clocking 2:09:54. Now he intends to be in top shape when he will come to the Vienna City Marathon for the first time.

Although still only 26 years old Levy Omari has quite a lot of experience. He started running as a teenager after a teacher suggested to him to give it a try. Omari won the Tegla Loroupe Peace Race in Kenya, beating Wilson Kipsang on this occasion and then participated in the World Junior Cross Country Championships at the age of 18. He finished tenth in this race in 2008. Omari then turned to the marathon already at the age of 20. He won his debut in Brussels in 2010 with 2:13:30.

While more athletes will be added to the elite field in the coming weeks at the moment three Kenyans look to be strong rivals for Levy Omari. Robert Chemosin clocked his personal best of 2:08:05 in a fine debut race in Warsaw a year ago. He was second in this race. Chemosin has run a couple of fast half marathons and his personal best of 59:19 suggests that he can run much faster in the marathon than 2:08. Another Kenyan who has great speed is Suleiman Simotwo. He took fifth place in his marathon debut in Vienna a year ago with 2:14:42 and then improved to 2:08:49 in Frankfurt last October. The former 1,500 m runner has adapted well to the marathon distance and could improve significantly again.

David Kogei will run his marathon debut in Vienna on 10th May. The Kenyan, who features a personal best of 59:46 in the half marathon, knows a bit of marathon running already. He has acted as a pacemaker in Vienna a year ago and then did the same job in the Berlin Marathon, where he ran 29 k and helped guiding Eliud Kipchoge to a world lead of 2:04:00.