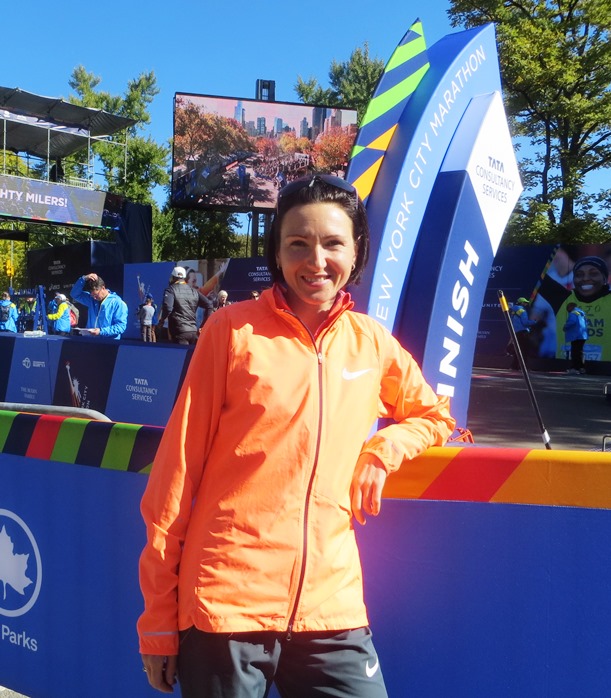 NEW YORK (30-Oct) — Latvia’s Jelena Prokopcuka has won two TCS New York City Marathon titles, placed on the podium at two more, and finished in the top five in all six of her Five Borough jaunts. With that said, there’s no question why this is Prokopcuka’s favorite marathon.

“This is my marathon!” Prokopcuka proclaimed with a smile, speaking exclusively to Race Results Weekly at the race’s press center. Flanked by her husband Aleks, Prokopcuka sported a pink Nike track suit and an enthusiastic grin, anxiously awaiting Sunday’s race.

At the age of 39, Prokopcuka is the most experienced athlete in the women’s elite field. With at least 19 marathons under her belt, she’s long been a fixture on the road racing scene. Yet there’s something extra special in store whenever Prokopcuka returns to the Big Apple.

It all began more than a decade ago in 2004, when Prokopcuka came to New York City for the first time. Without a moment’s hesitation she recalls the date, her race, fifth place finish, and the revelation that hit her that day.

“My first run in New York was in 2004 and I didn’t expect something special. It was a very interesting experience, as 2004 was a lot of, as usual, strong runners,” she said, emphasizing with her hands how strong the field was [it included world record holder Paula Radcliffe]. “And I was fifth position, yes? I was disappointed because at that moment I understood I could run faster. But my coach and everyone were so happy because I was five. Of course five is great, but at that point I was disappointed.”

Though disappointed she couldn’t grab a podium spot, the moment gave Prokopcuka confidence and the drive that she could truly compete and contend with top women from around the world. A year later she returned here and took home victory, winning over Susan Chepkemei and Derartu Tulu.

“I like New York, yes,” she began, reflecting on her first title. “I won twice in New York, so of course it is something special for me. But it was my first marathon that I get a crown. It was amazing. I like this place, I like these people, I like the amazing atmosphere.”

In love with this throbbing city of over eight million, Prokopcuka successfully retained her title in 2006, finishing ahead of Catherine Ndereba and Deena Kastor, among others. A grind-it-out, foot-on-the-gas-pedal runner, Prokopcuka thrived on the undulating course and its spirit-breaking hills. “This course is very suitable for me because it is not flat. It is a difficult course, and I can use this very well and because it is difficult, it is my course.”

My course. Prokopcuka points to her heart when she calls New York ‘My Course.’ Placing third in 2007 and 2013, then fourth last year, Prokopcuka keeps racking up stellar finishes. Like Meb Keflezighi on the men’s side, she’s an ageless wonder, competing side-by-side with women nearly two decades younger (Prokopcuka turned 39 in September).

“[In 2014] I did what I could and was able to do. I was happy to be fourth, because fourth at the New York Marathon is great. To be first is unbelievable, yes. To be third is amazing. To win is very good. I understand I am not so young and it’s very different to struggle with the youngest runners, so I am happy with all my places. Of course I want to win but now, it’s not so,” she began before a long, drawn out pause. Speaking from the heart, she chooses her words carefully. “Not so important. I just like to run and am very happy what I can run now. Of course it is more difficult than ten years ago, but anyway I am here, I am invited and I have a chance to run and win in the first five positions. I am happy.”

While defending champion Mary Keitany, Virgin Money London Marathon winner Tigist Tufa, Boston Marathon victor Caroline Rotich, and Olympic silver medalist and 2013 TCS New York City Marathon champion Priscah Jeptoo have gained a majority of the pre-race headlines, Prokopcuka must still be considered a top contender. Her resume is deeper than the rest, and her experience on the course is unmatched.

“I feel I am strong and I respect my competitors. But I feel I can run [fast], so it’s an amazing feeling when you understand that you are not young, not so long way in the future [in terms of years left in her career], but you are here and you win respect. It is great,” she said. “I know this course very well, I can use this course, and I think this course likes me, too! It helps me, too!”

When asked her goal for Sunday, Prokopcuka looks out towards the finish line area, adjusts her signature dark sunglasses perched atop her head, and then answers. She spent three weeks in St. Moritz at altitude, and thinks back to the hard runs tuning up for her return to Manhattan.

“[New York] gives me a lot of energy and it is great. I am going to do the best I can,” she began, speaking in an endearing accent. “My ideal race is if I can do the best I can. Now it is difficult to speak about time or position, yes, but I did a lot [of training] and feel I am strong enough to run well. I have a chance! And if I am ready I will use this chance.”