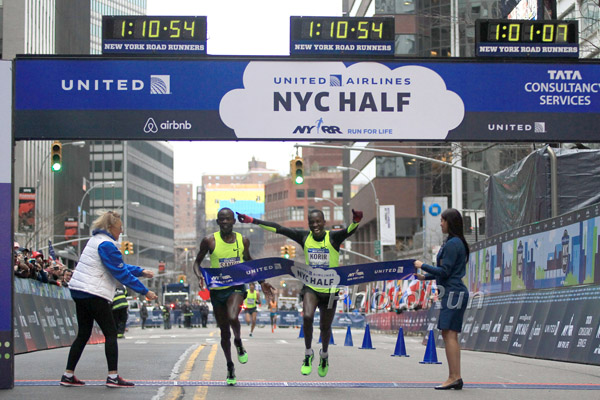 New York, March 20, 2016  – Three event records were broken on the streets of Manhattan at the 2016 United Airlines NYC Half on Sunday, March 20, in an event that featured 12 Olympians and 12 Paralympians.

Molly Huddle, an Elmira, NY, native, defended her United Airlines NYC Half title, beating Joyce Chepkirui (KEN) by eight hundredths of a second in a thrilling photo finish with a time of1:07:41.

“I knew once I hit those final 150 meters, I just needed to sprint,” Huddle said. “I kind of was just trying to get my body across the line and not fall at the same time.”

Chepkirui was second for the second consecutive year, finishing a stride behind Huddle.

In the men’s field, Kenyan Stephen Sambu took first place in 1:01:16, his first victory in the event after finishing second last year and third the year prior. Sambu was followed by runner-up and compatriot Wilson Chebet (KEN), who crossed the finish line 1:01:35, and Sam Chelanga (USA), who clocked in at 1:01:43.

This was the 11th running of the United Airlines NYC Half – the first of five events in the NYRR Five-Borough Series. The professional athlete prize purse totals $115,000. The course took runners through a tour of Manhattan–through Central Park, Times Square, and down the West Side Highway to the finish in the financial district. Unofficially, there were 20,155 finishers who completed the course.

The NYRR Times Square Kids’ Run at the United Airlines NYC Half featured 1,000 kids ages 7-18 who competed in a 1500-meter out-and-back road race on Seventh Avenue that started and ended in Times Square. The race included a youth wheelchair heat for the first time.