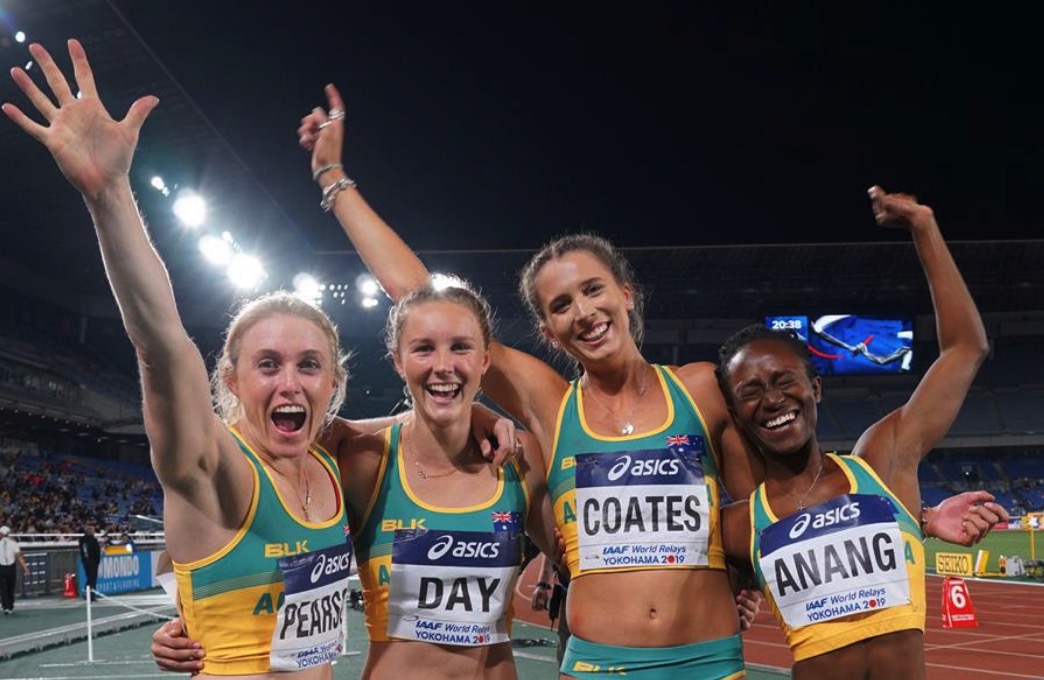 The two-day IAAF World Relay Championships have concluded overnight in Yokohama with Australia claiming one medal and securing selection for the Doha World Championships in two events.

In recent years the Australian men’s 4x100m and women’s 4x400m have been our strongest relay events, but it was pleasing to see in Yokohama how the other two relays, women’s 4x100m and men’s 4x400m stepped up and achieved automatic selection for the IAAF World Championships to be held in Doha in September/October.

A fit Sally Pearson and the addition of new sprint queen, long jump specialist Naa Anang, proved key ingredients to the women’s 4x100m unit. Combined with national 200m champion, Maddie Coates and Commonwealth Games representative Riley Day, they clocked a stunning 43.19 in the heats – the third quickest time in Australian history and the fastest since 2000. There third place and fifth overall time, secured a finals berth where they placed sixth in 44.62 seconds. For the final, 20-year-old Victorian Nana Owusu-Afriyiereplaced Coates due to a sore hamstring. As a top-10 team they secured automatic selection for Doha.

The men’s 4x400m team was equally impressive in the heats, recording 3:03.53, a shade faster than the time they ran at the Queensland Track Classic and their fastest for six years. The team of Tyler Gunn, Steven Solomon, Alex Beck and Murray Goodwin, placed fourth in the heat and progressed to the final where they placed seventh in 3:05.59. Importantly their top-10 placing securing qualification for the 2019 World Championships.

Two new events were added to the World Relays program this year. Former NSW 400m champion, but now an 800m specialist, Joshua Ralph was perfectly suited to the format of the 2x2x400m relay, where an athlete runs two 400s with about 60 seconds rest. He was joined by rising 800m star Catriona Bisset and together they ran wisely to secure silver – the equal best performance by an Australian team at the world relays.

In their heat Australia placed third, with the fourth fastest time overall in a time of 56.40. They lined up in the four-person final, to discover Jamaica were non-starters. But there was disappointment for Australia when Beahan broke at the start – resulting in disqualification for Australia.

In the women’s 4x400m, the team of Ellie Beer, Caitlin Sargent, Lauren Wells and Morgan Mitchell placed sixth in 3:31.34, progressing to the B final where the same team placed fifth with 3:32.22.

Australia also competed in the new Olympic event, the mixed 4x400m relay where the team of Angie Backburn, Luke Stevens, Ian Halpin and Bec Bennett finished fourth in their heat and 14th overall in a time of 3:21.80.