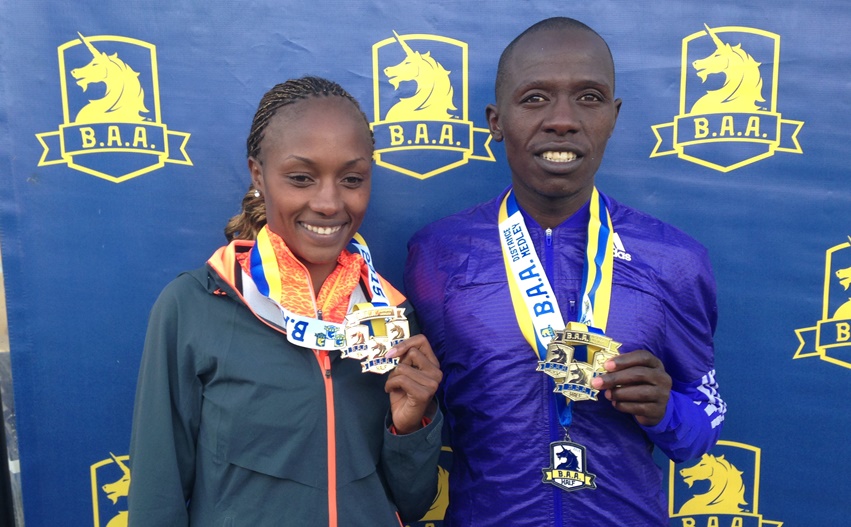 From the start in Franklin Park, Salel and fellow Kenyan Stephen Sambu established their dominance on the competition. Prior to the race, the pair discussed plans of attacking the event record of 1:00:34, set by two-time Boston Marathon champion Lelisa Desisa in 2013. After five miles, Salel and Sambu were all alone, racing side-by-side along Boston and Brookline’s picturesque Emerald Necklace park system.

“We have raced a long time together. I knew he was a very strong guy, so we agreed we wanted to maybe push the pace so we can maybe break the course record,” Salel would say later. Hitting 10 kilometers in 28:26, Salel and Sambu soon passed Jamaica Pond and the Arnold Arboretum. Returning to Franklin Park, it was anyone’s race.

Familiar with his compatriot’s strong finishing abilities, Salel chose to make a bid for the win while in Franklin Park Zoo, knowing there was roughly a mile left in the competition.

“After 11 miles I started pushing there. I pulled away and I go. I was very confident that everything can happen and I knew I could win,” said Salel, winner of this year’s B.A.A. 10-K. The move worked to perfection, as Salel quickly gapped the two-time defending B.A.A. Distance Medley champion. By the time he entered Franklin Park’s White Stadium for the sprint to the finish, Salel’s gap was 22 seconds.

“It is very special to me because I have been trying. This is the third time I’ve come here. In 2013 and 2014, I came in second,” Salel said, following a ceremonial victory lap in front of fans. “Today I am very happy to win.”

Salel credited his energy and win to the people of Boston who cheered him on from start to finish. Those on the course waved and shouted words of encouragement to the 24-year-old.

“When you turn to come back you see people waving to you, which was so nice. The crowd was so happy and they kept you confident,” he said. “I like running here. I hope to come back and run the Boston Marathon.”

For Mary Wacera, today’s race provided a bit of redemption. Last year, Wacera was forced to drop out mid-race due to a knee injury. In 2015, she was determined to prevail stronger than ever and take home the title.

Through 5 kilometers in 16:38 and 10 kilometers in 33:31, a group of four women had congregated out front. Included among the pack were Wacera, 2015 Boston Marathon champion Caroline Rotich, last year’s B.A.A. Half Marathon runner-up Cynthia Limo, as well as Ethiopian Belaynesh Oljira.

Similar to the men’s race, the women’s contest would be decided in the final miles. Approaching the Franklin Park Zoo, Limo established a gap of roughly ten yards on Wacera, with Rotich and Oljira an additional ten yards back. At that point, Wacera was unsure she’d be able to catch up.

“I didn’t think I could close the gap. It just happened, I don’t know how,” said Wacera. Minutes later, she’d have a second wind of energy. Despite the building fatigue in her muscles, the mother of one daughter pushed on, thinking about the bonus incentives she’d earn if she finished first.

With the crowd on their feet, Wacera came down the finishing straight in full sprint mode, a step up on Limo. The title was hers in 1:10:21, one second ahead of Limo. Oljira placed third in 1:10:41, followed by Boston Marathon champion Rotich (1:10:45).

“It feels good. I have to forget how painful it is and I have to be happy! It was a tough race,” said Wacera, taking home a total of $30,000. Like men’s winner Salel, she won $10,000 for finishing first, plus $20,000 for winning two B.A.A. Distance Medley races (she won the B.A.A. 10K in June). With the money, Wacera plans to build a home back in her native Nyahururu, Kenya. She’ll also take home a shiny gold medal, which she plans to give to daughter Ann, who turns 5-years old this coming week.

“She loves to run and she’s always saying ‘Go Mommy, you have to win!” said Wacera. “She’ll be very happy.”

Rotich, who triumphantly won the Boston Marathon in April, was happy with her fourth place performance. She enjoys racing in Boston, and is now gearing up for the TCS New York City Marathon on November 1.

“It was a good race and I am OK with what happened, but at the same time I wanted to win,” said Rotich. “It’s good to be back in Boston.”

The top American woman was Clara Santucci of Dilliner, Penn., seventh place in 1:14:23.