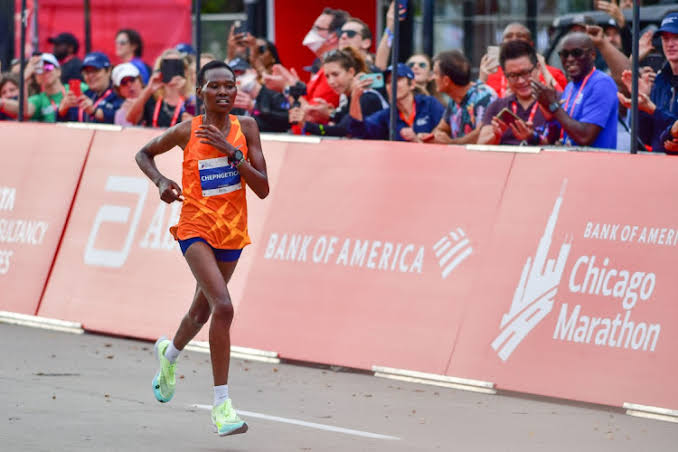 CHICAGO — In today’s 43rd running of the Bank of America Chicago Marathon race organizers and participants celebrated the return to in-person racing 728 days after its last finish line closed. Under cloudy skies and less-than-ideal race conditions, 26,000 participants traveled through 29 Chicago neighborhoods to make history as the Chicago Marathon is the first of the American Abbott World Marathon Majors to come back online after almost two years. The elite races crowned new champions as Ruth Chepngetich (KEN) ran away with the victory in 2:22:31 and Seifu Tura (ETH) accelerated to the finish in 2:06:12. Americans Emma Bates and Galen Rupp finished second in the women’s and men’s competition, highlighting the power of U.S. distance running.

“This year’s race was a celebration of the collective spirit of our running community, our city, our event sponsors, our volunteers, and our spectators,” said Carey Pinkowski, Bank of America Chicago Marathon executive race director. “The elite competition highlighted the grit and determination of all of our runners, and we’re excited to do it again in 2022.”

With the tagline “Chicago is Your Start Line” motivating runners during the lead-up to this year’s event, elite athletes from around the world gathered in Grant Park to battle their competition. The women’s race almost immediately turned into a time trial with Ruth Chepngetich barreling out of the start on a blistering sub-2:12 pace. Chepngetich, the 2019 World Marathon champion, dropped her pacer eight and a half miles in as she threw caution to the wind in what appeared to be a world record attempt. Compatriot Vivian Kiplagat tried to match Chepngetich’s early stride, resulting in a strenuous race and a significant positive split over the second half the course.

While Chepngetich set out in a race against the clock, she decelerated over the final kilometers, and her sub-2:12 pace evolved into a 2:22:31 victory, run the hard way as she dueled the warm temperature and gusting winds over the second half of the race. With Kiplagat steadily faltering, Americans Emma Bates and Sara Hall moved into contention for podium finishes. Hall, a pre-race favorite, put the American Record on the backburner as she struggled over the second half to maintain her pace. Meanwhile, Bates ran the best marathon of her career, negative splitting the course to finish second in 2:24:20, a personal best that lands her ninth on the U.S. all-time list of fastest marathon runners.

“This is my first time in the United States,” said Chepngetich following the race. “I have to say I am so excited and happy for the win of today. The race was good. It was nice, but it was tough. To push alone is not easy. I just focused and believed for myself.”

While the women’s race up front turned into a solo record attempt, the men’s race kicked off on 1:02:30 pace with a small pack forming toward the front. Ethiopia’s Shifera Tamru eventually took a page from Chepngetich’s playbook and dropped the event’s pacer eight miles in, pushing the pace alone before the chase pack reeled him back in. A steady pack of seven men rolled through 19 miles together, but the pack started to fracture shortly after 20 miles. A 4:42 split at Mile 21 reduced the race to three: Seifu Tura (ETH), Galen Rupp (USA), and Eric Kiptanui (KEN).

As the 38K mark approached, Tura hit the gas pedal and took flight, throwing down a 4:40 mile while playing an aggressive game of “catch me if you can.” Rupp tried valiantly to catch Tura, dropping Kiptanui in the process, but he could not match the closing speed of Tura. Tura made the turn from Roosevelt Road to Columbus Drive as the race’s 2021 champion, stopping the clock in 2:06:12. Rupp, the 2017 Chicago Marathon champion, followed in 2:06:35, and Kiptanui hung on for third in 2:06:51.

“I just was determined to fight to the very end,” said Tura. “I was extremely concerned when they said the other day that it was going to be very hot, because I had not prepared for warm weather. There was a breeze, and the first half was not too fast, so that helped me and I was able to do well.”

Behind the elite competition, Olympian Shalane Flanagan (USA) continued her #ProjectEclipse quest to run all six Abbott World Marathon Majors this fall under three hours. Flanagan carried her momentum from Berlin (2:38:32) and London (2:35:04) into Chicago, finishing well under three hours in 2:46:39. Flanagan returns to the roads tomorrow to compete in Boston.

In the women’s elite wheelchair competition, Tatyana McFadden (USA) cemented her legacy in Chicago as the most decorated champion in the event’s history, winning her ninth crown while leaving the competition over a minute behind. Yen Hoang (USA) crushed her PR to finish second in 1:50:14, and Jenna Fesemyer (USA) took home third in 1:50:23, her first podium finish in six attempts in Chicago.

“I ran my very first marathon in 2009 and it has led me to an amazing career,” said McFadden. “To be back and to get number nine is amazing. Chicago is my second home – I get the greatest support. The crowds cheering me along the way were keeping me going.”

In the men’s elite wheelchair competition, Daniel Romanchuk (USA) pulled away from two-time Olympic gold medalist, Marcel Hug (SUI), on Roosevelt Road to race to his third consecutive victory in Chicago in 1:29:07. Hug finished second in 1:29:08, and Aaron Pike (USA) finished third in 1:29:28. This year marked Pike’s 12th Chicago Marathon and his first time finishing in the top three. Johnboy Smith (GBR) finished fourth in 1:29:37, and Rafael Botello Jiminez (ESP) finished fifth in 1:38:27. 2021 stands out as the first time four men broke 1:30 in the same race.

“It is an amazing day out – nice and warm and dry,” remarked Romanchuk at the finish. “It’s a smaller field than usual, but, overall, it’s amazing to be back here racing.”