Tracking the performance of 6,000 runners over 40 years reveals that age-related decline is very different from the progression of world best times and marathon qualifying standards in Boston, New York City and Chicago.

Every runner knows that when it comes to racing, age is the enemy. Marathon runners are fortunate to experience a more gradual decline than track and field stars, but every birthday means the next race might be slower, no matter how we prepare.

A recent study of thousands of runners, however, shows that what we thought we knew about the rate of decline—for both men and women—is not what is asserted by the qualifying standards of the United States’ most popular marathons.

The data shows a sizable gap between how the world-best times decline by age and how this same decline is experienced by individual runners. And for men, the rate of decline is considerably faster than is suggested by qualifying times for the Boston, New York City, and Chicago Marathons.

Every runner knows that young runners are typically the fastest. Even in distance running, like the marathon, runners in their twenties or thirties tend to dominate the field. Why? As we age, our muscles rebuild less quickly, our cardiovascular performance fades, and we are prone to injury, which can hinder training.

We can fight off the iron hand of age with discipline, diet, and recovery techniques. But when we view the decline of thousands of runners, we get a clearer picture of the true effect of age on the individual runner.

The study was conducted by Jason Hall, lecturer in finance at The University of Michigan and consistent sub-3 hour marathon runner. The analysis takes advantage of the fact that the number of runners participating in organized events has grown substantially in recent years at all distances, from the 5K to the marathon. For example, in the last decade, more than half a million runners completed at least one marathon each year.

The most popular races are in such demand that qualifying times are used to limit the number of racers who receive guaranteed entries. Some races offer lotteries, but one of the most famous races, the Boston Marathon, relies on a field selected mostly by qualifying time.

But the major marathons don’t agree with each other on qualifying standards. For a male runner entering the New York City Marathon, for example, the qualifying time increases by 12 minutes for a runner aged 45 to 49 versus a runner aged less than 35. In Boston, that gap is 20 minutes. For a female runner, the corresponding increases in time at the same age groups are 25 minutes in New York City (NYC) versus 20 minutes in Boston. NYC’s qualifying times suggest that the performances of women are more affected by age than men, but the Boston qualifying times suggest the opposite. These differences show we don’t have a good understanding of how running performance varies with age.

Hall’s study examined the relationship between running times and age by using a unique dataset: More than 55,000 observations were taken from a 10-mile event in which runners participated at least five times. The important aspect of these observations was the opportunity to track individual runners over at least five races on the same course and in the same month each year.

The study found that for each year above the age of 35, men slow at an annual rate of 1.1 per cent, and female runners slow at a rate of 0.9 per cent, a gap that is statistically significant. This finding differs from the guidance provided by the United States Association for Track and Field (USATF), which recommends age-grading of performance on the basis of world-best times. This also differs from the progression of age and gender qualifying times for the marathon in Boston, Chicago, and New York City.

The world’s best runners are obviously different to the average runner. In addition, world best times are often a single snapshot of a runner’s career—not the progression of the same runner over time. The fastest woman over 40 might not be even close to being the fastest woman when she reaches the age of 50.

By determining age-related race standards based on the very best days by the very best runners, Hall suggests, the USATF is presenting an unrealistic standard that differs from how the general population experiences declines in performance.

A RACE THROUGH THE NUMBERS

To complete the study, Hall used a unique dataset of runners provided by the 10-mile event in the Crim Festival of Races—also known as the Crim—in Flint, Michigan. Held continuously since 1977, the race occurs on the same weekend in August each year on the same course.

The dataset, which spans 40 years of races, includes all runners who can be matched with a prior year’s performance of the same runner, which allowed him to directly measure the relationship between age, gender, and performance.

The data excludes runners younger than 16 and is limited to runners who participated at least five times. Hall was able to collect 58,599 observations from 6,666 individual runners. Because the increase in race participation by women is a relatively recent phenomenon, the dataset skews 67 percent male and 33 percent female.

The relationship between runner age and time was measured by regressing the natural logarithm of time against runner age. The model assigns a baseline time for each individual runner, which accounts for that runner’s ability. This means that what the model captures is how that particular runner’s performance shifts as that runner ages. He expected that runners from ages 16 to 34 would show no deterioration in performance over time, but runners aged 35 and above would be, on average, slower as they age. Hall also incorporated the mean temperature on the day of the Crim as a control variable

The largest number of runners fell into the veteran group, who had a median finish time of 88 minutes for men and 103 minutes for women. These times are nine and eight minutes slower, respectively, than median times for young runners.

The results show that the times for veteran male runners increase by about 1.1 percent each year at ages 35 and up. For example, if a 47-year-old man ran 88 minutes in 2006, ten years later we would expect this runner to take 99 minutes, or about 1 minute per year for the median veteran. In contrast, the times of young men increase by about 0.15 percent, or about 1 minute every six years.

There is a notable increase in running times from age 70 onwards. Senior men slow at an annual rate of 3.0 percent and senior women slow at a rate of 2.4 percent. However, not much should be inferred from this latter result because of the small number of senior women in the sample (0.2 percent).

Hall also looked at runners who participated in the Crim at least 10 times and 15 times. He also compared his sample results with the qualifying times used in the major marathons.

Hall’s result shows that the performance decline for men is markedly different than the progression of qualifying times for the Boston, New York City, and Chicago marathons. For women, there is also a notable gap between the typical runner’s age-related performance decline and the USATF’s world record progression.

Two caveats: The qualifying times for the marathons are not necessarily designed to match the age-related decline in running performance. Race organizers will also consider which demographic of runners they want to encourage to enter the race. Also, the typical marathon runner is likely to be better trained than the typical 10-mile runner, and this could mean less of an age-related decline in performance. But it could also be the case that there is more of an age-related decline with marathon running because increased injury risk means runners having to lower their mileage as they age.

There is one area in which existing marathon qualifying times reliably approximate age-related decline: women over the age of 40. But the typical female runner’s performance decline is not as great as suggested by the qualifying times.

Both the existing marathon qualifying standards and the age-grading recommended by the USATF are closely aligned with the age-related progression of world best times.

The results of Hall’s study suggest that the world-best times set by different runners who happened to set the world best time in their age group are an unreliable way to measure age-related decline in performance.

The results show that an individual runner will experience a faster rate of decline than the progression in these world-best times. Using world best times as a benchmark understates the effects of aging on performance. 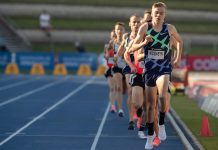 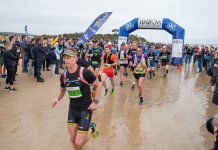 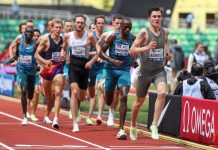 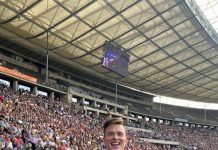 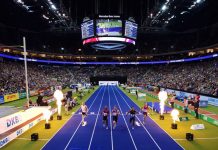