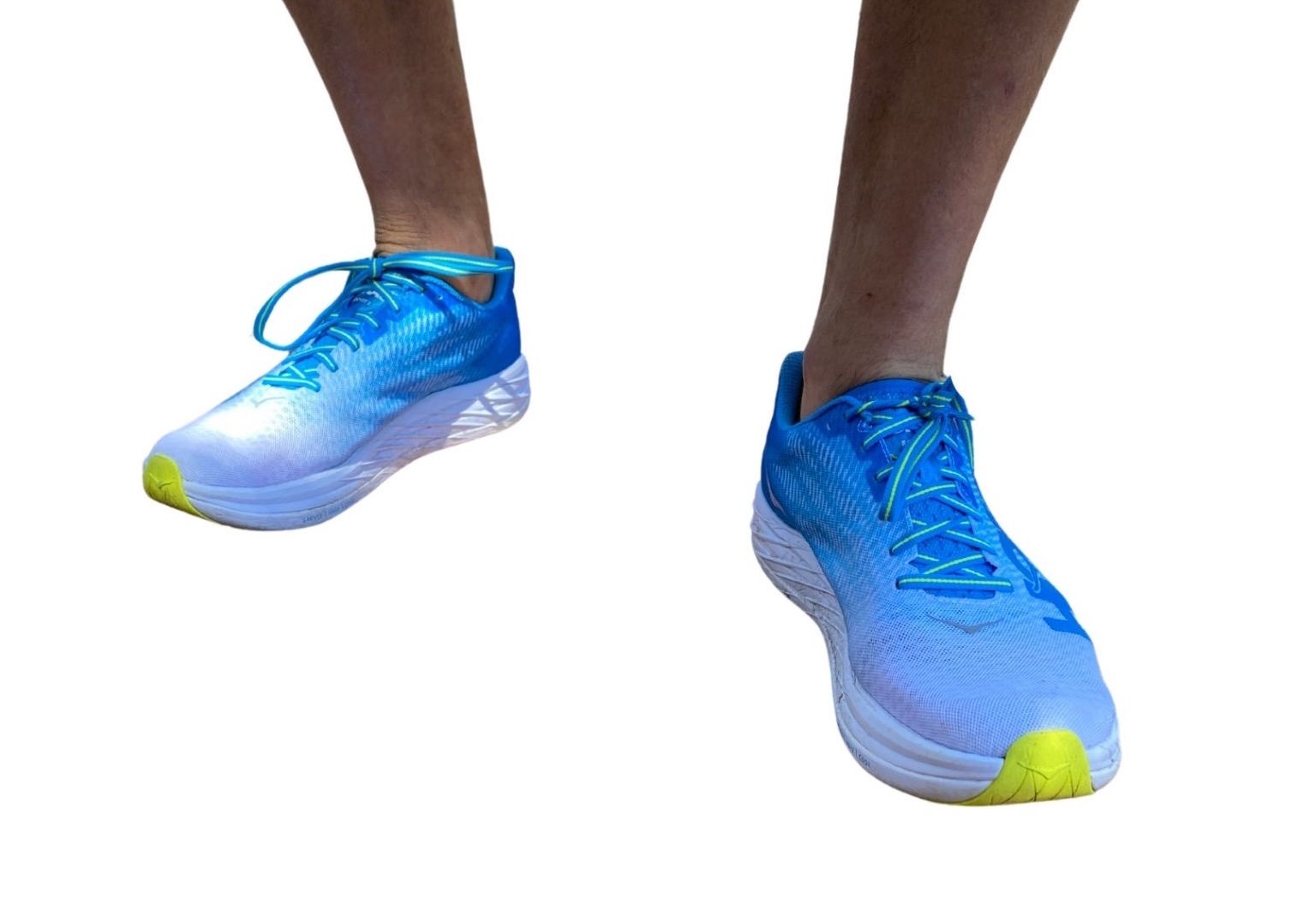 2020 has been a huge year for the shoe wars that Nike kicked off with their vaporfly 4% release a few years back.

HOKA ONE ONE, the brand known for its max cushioned shoes and metarocker midsole geometry, were second to the table. In 2019 they dropped their Carbon X road racing shoe, all reports indicate they sold like hot cakes.

Now zoom to the end of 2020, and HOKA have just launched the Rocket X (dropping soon in Australia). It is to be viewed like the Carbon X, but slightly faster, subtly better.  Its stack height is slightly lower, and the shoe is lighter.   Running in the Rocket X feels more like a traditional shoe than a HOKA. The wide base of a Clifton (and most models) is gone, trimmed down to increase performance.

The midsole foam used by HOKA is still their proprietary EVA. The midsole foam found in the Rocket X is the lightest foam that HOKA has ever produced.  The EVA foam works for HOKA, and if it ain’t broke….

The hard work is paying off for WA-based duathlete Matt Smith (@teamsmithie) who picked up the State Champ Belt a little while back. 🏆⁠ ⁠ Big cheers to @exss.events and @triathlonwa for getting the event going in such a tough year. And big congrats to this guy – whose come close in plenty of track and distance events and got it done when it mattered. 💪💙⁠ ⁠ 📷 @teamsmithie⁠ ⁠ #TimeToFly #HOKARocketX #statechamps⁠ ⁠

As seen above, the Rocket X has lower stack heights than all its competitors (barring the Cloudboom) and is competitive on weight.

Cool things about this shoe

–       Lower Stack Heights:  Not everyone likes running with 40mm of foam under foot, especially during a race. At 25mm (forefoot) and 30mm (heel), the Rocket X is still far from a minimalistic shoe, yet retains a degree of responsiveness that is hard to achieve in the higher stack shoes.  If you are a HOKA fan and want more cushion, go the Carbon X.

–      Very Responsive:  In some of the shoes with greater stack heights, and even softer foam, it really feels like you are sinking into the foam.  The Rocket X has soft foam, to that there is no argument, but it isn’t so soft it’s mushy.  It is soft while remaining snappy.

–       A different road:  Like ON with their Cloudboom, and Asics with their Metaracer; HOKA elected to not challenge World Athletics’ stack height rules (limits the stack height to 40mm). There are pros and cons of this decision, and it’s each for their own.

To buy or not to buy?

The Rocket X is loaded with HOKA’s lightest midsole foam to date, and probably its softest. It’s a fast, snappy ride. If you want a road racing shoe that doesn’t make you feel as though you are running on stilts, then the Rocket X may be your ideal racer. Coming soon, be quick, most carbon shoe drops are selling out the same day…

Disclaimer:  Runner’s Tribe were given a pair for free.

Written and tested by Sam Burke for Runner’s Tribe.

@runningwarehouse posted this YouTube video of the Rocket X! @hokaoneone new carbon plated super shoe, which @aliphine used when she won the US Olympic Marathon Trials! But the video was taken down quickly for some reason… good thing I got a chance to watch it. It seems that the colorway is different from the original. I can not wait until this shoe come out! #runningshoes #carbonfiber #carbonfiberplate #marathonshoes #hoka #hokaoneone #hokafans #hokarocketx #rocketx #hokashoes #hokarunning #hokarunningshoes #runningwarehouse #godbless