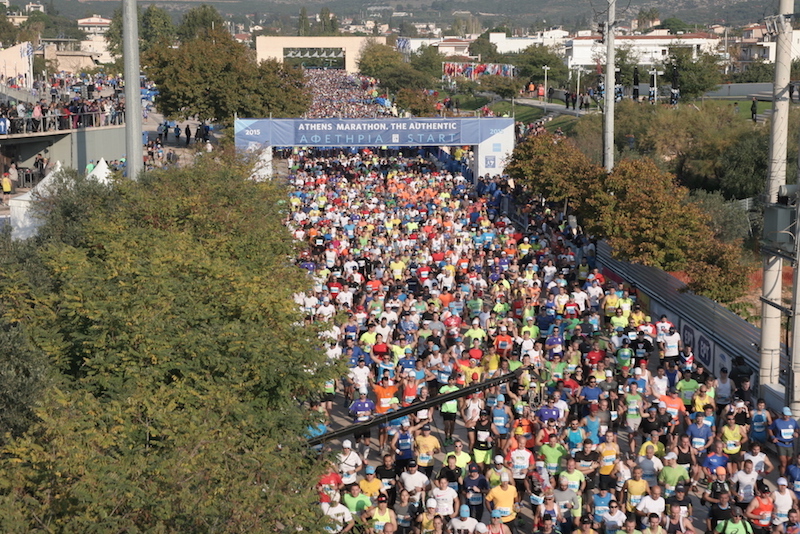 The “Athens Marathon. The Authentic” (AMA) continues its run of success despite the tough economic situation for Greece as a whole. The organisers of the first ever classic marathon race in history, which leads on the original course from Marathon to Athens, have announced that the elite field will be restored to the event on November 13 after a one year break. In addition, the race is certain to make history, since for the first time more than 50,000 runners are expected to register for the various events in the Greek capital. They will include a record of at least 18,000 who will run this classic marathon course.

In the days before the “Athens Marathon. The Authentic”, organised by SEGAS, the Hellenic Athletics Federation, the 21st World Congress of the Association of International Marathons and Distance Races (AIMS) will also take place in Athens, the birthplace of the marathon race and host of AIMS headquarters since 2011. 2016 will also mark the fourth year that Athens will host the “AIMS Best Marathon Runner” Awards. These will be presented to the best marathon male and female runners of 2016, chosen by a vote amongst all 400+ AIMS members.

After a year of intensive bank capital controls in Greece, the Authentic Marathon will be able this year to resume recruiting international runners for its elite field. In 2015 this had to be curtailed due to the bank capital controls which had deprived SEGAS from the legal framework to make proper financial arrangements with the international elite athletes. Nonetheless the race proved a success in the circumstances with a record number of more than 43,000 athletes entered for the various distances in 2015.  The return of the elite athletes ensures the Athens Marathon regains its true international status. The organisers are keen to recruit top runners who are capable of breaking the course record. In 2014 Felix Kandie of Kenya ran 2:10:37 to break by 18 seconds the time of Italy’s Olympic champion Stefano Baldini which had stood for ten years.

Before the winner of the 34th edition of the “Athens Marathon. The Authentic” crosses the finish line in the Panathenaic Stadium on November 13, an important special ceremony will also take place in that same venue which staged the first Olympics of the modern era in 1896. This will commemorate the first Olympic Marathon race, held 120 years ago. The ceremony will be organised in conjunction with the Hellenic Olympic Committee and the organisers expect huge numbers of spectators in the historic marble arena.

In the meantime the Authentic Marathon has clearly aroused great interest in running among the Greek public. Proof of this was provided on just one day in spring this year when the organisers opened online registration for participation. Within 10 hours races for the shorter distances of 5 and 10 k were completely sold out. „The success of the Athens Marathon is a contribution to people’s awareness of a healthier lifestyle. That is really the biggest legacy of the Athens Marathon for the Greek public,” said Kostas Panagopoulos, President of the Hellenic Athletics Federation.

More information and online entry is available at: www.athensauthenticmarathon.gr