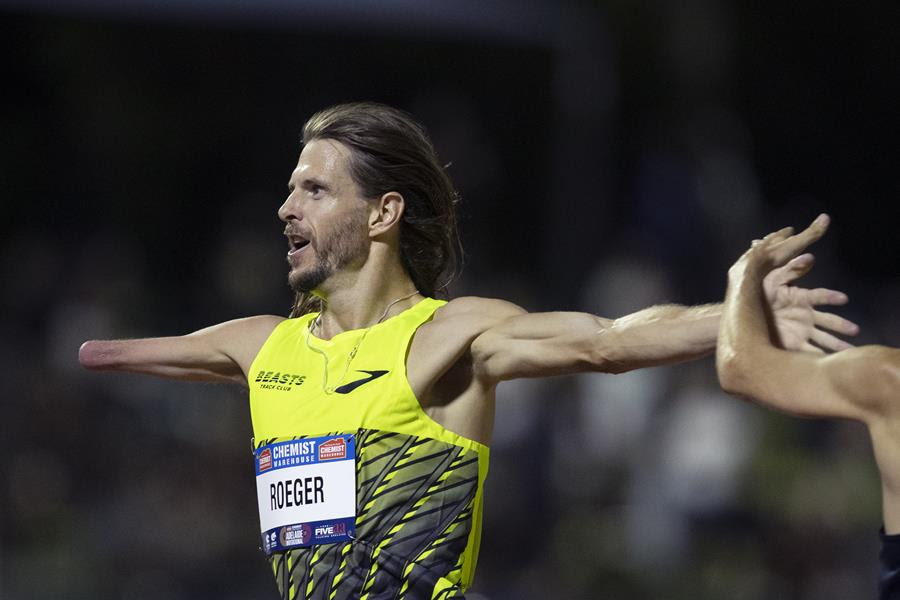 With a record crowd roaring behind him, 33-year-old Roeger ran a blistering 13:52.05 over 12 and a half laps at SA Athletics Stadium to shave more than eight seconds off his previous world record set at the Sydney Track Classic last year.

“I didn’t think that I would have the chance to talk about a world record in the 5000m tonight. It goes to show that if you come into the night and the race relaxed, it goes a long way, and the home crowd and the Adelaide track really helped me,” Roeger said.

The record marks a stellar comeback to the track for the now-Canberra based marathoner, after a devastating end to his Tokyo campaign where the gold medal favourite placed sixth in his pet event after suffering a stress fracture in the weeks before his race.

“I have just got my head right and find my mojo in the past four weeks – I gave myself the time to put Tokyo behind me and it’s a clean slate for me, the last five weeks have showed that.”

While Roeger no longer has a marathon to contest at the Paris Paralympics, he said the world record gives him the confidence boost he needed to focus his efforts on the 1500m – the only distance event on offer for his event.

“The marathon isn’t in, but I am in good 5000m and 1500m shape so Coach (Philo) Saunders thinks I can get back on the track and compete for the gold.”

Dusting off the cobwebs ahead of the World Athletics Indoor Championships, Browning began his 2022 campaign with a 10.12 (+0.9), defeating trans-Tasman rival Edward Osei-Nketia (10.19) and Tasmanian Jack Hale (10.26).

Buoyed by the support of his fans, Browning said it was a special experience notching his first win in Adelaide.

“I love running here. This was the first time I won a race here in Adelaide. The last time I ran here was the Adelaide Track Classic as a junior. I was 17 years old and I ran about fourth or fifth so this experience doesn’t compare and I’m glad it’s back on the calendar,” Browning said.

“It’s fantastic to see the crowds here and see what the Olympics has done for our sport. It’s unbelievable to see so many fans out here – I didn’t expect it and wasn’t prepared for it, when you have to get marshalled and say no to photos, it’s hard because you see their smiling faces.”

As the Adelaide crowd rose to its feet and cheered home Olympic sensation Bol, it was clear that the track was being graced by one of the world’s best 800m-men – as Bol cruised to victory in a time of 1:47.14.

Taking a back seat early in the race before stamping his presence at the business end, Bol’s execution of the race proved precise, with the national record holder not worried about the time at this stage of the season.

“I didn’t have a plan for this race, it was just to get ready for the next few I’ve got coming. I’ve got big plans for this year, with the World Championships in Oregon and Commonwealth Games, and my goal is to do better than I did in Tokyo and that means coming home with a medal.”

Bendere Oboya delivered a dazzling performance in her 800m debut to topple a field full of class, stopping the clock in 2:02.88 to quash any doubt that the 21-year-old would struggle to transition to the two-lap event.

With an unfamiliar ring of the bell, the former quarter-miler coasted to the lead as she threw down the gauntlet to the field of experienced campaigners – a move that proved to be a winning one.

“It was my first 800m race and I remembered to run two laps!” Oboya said.

“I was quite honest with myself after the Olympics. I assessed my strengths and my weaknesses, and I had to face the fact that I’m not powerful so I thought, why not try the 800m. I’m only 21 so I can always go back to 400m but I’m liking what I’ve done so far and keen to do it again.”

Local hero Isobel Batt-Doyle had the opportunity to run her Tokyo discipline on her home track. Batt-Doyle, NSW’s Rose Davies and SA’s Caitlin Adams stretched away from the pack as soon as the pacer pulled away from the field.

Batt-Doyle and Davies went head-to-head for the middle portion of the race. Urged home by a strong home crowd, Batt-Doyle led by 40m at the bell lap and crossed the line in 15:13.35.

“I loved the experience. I didn’t quite get the qualifying standard (for World Championships or Commonwealth Games), but it was so good to get the win on the home track.

“Rose and I are great competitors, but in the second half of the race I ran the way I needed to run my best. I am so happy to get the win over her after she got me at Zatopek:10, we have a great relationship and we will continue to strengthen each other’s running over the years.

Connolly got off to a blistering start and got the jump on the field, with Day finally catching up in the final 10m. Connolly managed to hold on to get her 2022 season off to the perfect start, after missing a Tokyo spot through injury.

The Chemist Warehouse Summer Series will continue next month, with the Sydney Track Classic on March 12.