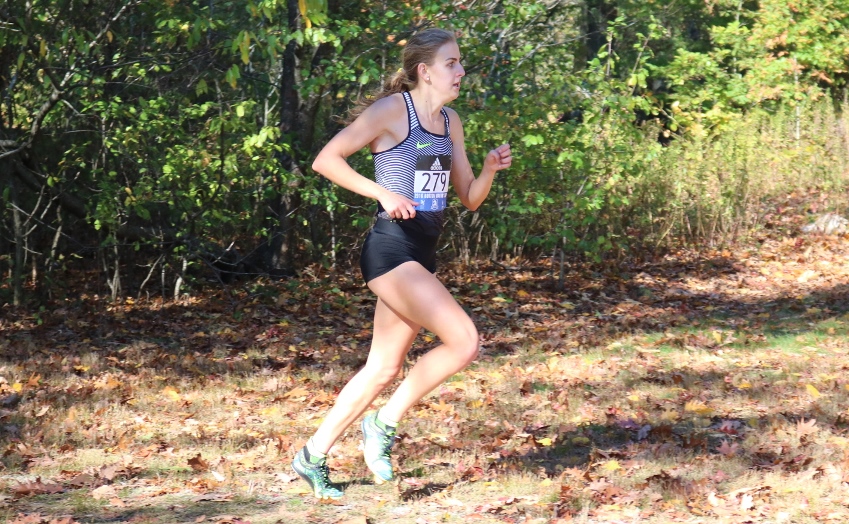 BOSTON (12-Oct) — Fewer than 48-hours after announcing that she had decided to part ways with coach Alberto Salazar and the Nike Oregon Project, Mary Cain raced to a third place finish here on a very windy day at the Boston Mayor’s Cup Cross Country Meet. With the Oregon Project logo missing from her uniform for the first time since turning pro in 2013, Cain ran a solid 17:08 to match her placing from a year ago.

The bubbly 20-year-old spent the better part of ten minutes speaking exclusively to Race Results Weekly, detailing her reasoning for being coached solely by 2004 Olympian John Henwood, a native of New Zealand who has been overseeing her workouts ever since Cain moved from Portland, Ore., back to her native New York in 2015.  She’s originally from the New York City suburb of Bronxville, just a half-hour train ride from Manhattan.

Describing the move as “rejuvenating,” Cain said the decision was primarily made because of her return to New York where she has enrolled at Fordham University.  She plans to stay awhile.

“At this point I’ve been living back home in New York for the past year and a half, I’m a full-time student at Fordham University (Go Rams!), and it was kind of a natural transition in that for the foreseeable future I don’t see myself leaving New York,” she began. “It’s good to have somebody who is there to see you day to day, even hop into some runs with you. Having John be able to really take control of my training, I think it will be really imperative for my success over the next few years.”

Since moving back east a year and a half ago, the running world has speculated that Henwood could potentially be the primary coach of Cain instead of Salazar. Henwood and Salazar had shared coaching duties, with Salazar providing workouts and Henwood being the eyes on the ground during sessions.

After a hit-or-miss track season last summer where she finished 11th at the USA Olympic Trials 1500m, Cain knew it was only a matter of time before she took a step back and reassessed everything.

“I think in a way this has been something in the back of our minds for a little while. I’ve been home for a year and a half now and John’s been extremely involved really throughout my career. I think sometime probably after this summer it felt like the next natural step for me, and so I kind of sat down and had to have that moment [of reflection]. Sometimes change is scary but sometimes it’s also exciting. Knowing that this isn’t some crazy leap — I mean, nothing huge has happened. I’m still really training with the same people and on the same program. I guess it’s kind of exciting now. It’s like ‘OK, this is something a little bit new, and I get to get more colorful uniforms now!'” she said, playfully joking about not wearing the all-black colors of the Oregon Project anymore.

Returning to a more serious note, Cain referenced the perks of being based in New York and having Henwood –a well-established coach in the NYC area– as her main mentor. An added perk is the other competitive athletes Henwood already coaches.

“It’s been really fun because I’ve been able to gain some training partners from the guys he coaches, and so long runs we’re all meeting up and getting to push hard. It’s kind of rejuvenated me a little bit. It’s going to be exciting to run with the Hounds this year.” (Henwood’s training group is called Henwood’s Hounds).

When questioned about her time with the Oregon Project and her thoughts on Salazar in particular, Cain was overwhelmingly positive. She did not hesitate to compliment the team for their dedication and success, and for the memories made while she trained with them.

“The Oregon Project will always be where I started. I’m really grateful for my time in Portland and the time when I was working with the team and everything. I’ll always have that and all those experiences still with me, and I’m still going to be cheering on Matt [Centrowitz]. When he was winning that Olympic gold I was freaking out around the house. I still hope to have my relationships with him and Jordan [Hasay] and stuff like that. I’m really grateful for my time there but I think I’m just excited to be going on to a new adventure.”

As the discussion progressed, this reporter could tell Cain deeply wanted a coach that was on-site and involved at all times during training cycles. She said both Salazar and Henwood have similar coaching philosophies; Henwood simply was more hands-on.

“I think both are really strong coaches, and I think that for me the biggest thing with John is really just location right now. Having someone hear me, see me, really kind of pick up on the little things like, ‘Mary called up and is clearly exhausted because she had two tests yesterday, let’s back her off today.’ Or saying maybe, ‘OK Mary we’re going to let you loose today.’ I think that in a lot of ways it’s not necessarily philosophical differences right now, but a lot of it was just having the convenience of someone I can really trust on the day-to-day to make the right calls.

“In terms of comfort and stuff like that, I think knowing and trusting that John backs me off or lets me go or something like that, that he really knows what he’s doing because he sees it and hears it. I think I’m somebody who, I have a tendency to over-train rather than under-train. If I have someone there to be like ‘go’ or ‘hold back’ — the other day in my one workout I’ve done so far this year, John ran it with me and we’d be talking and he said ‘you sound really great right now, go ahead.’ So for the last one I really tried to out-kick him so he couldn’t be talking to me…”

Having done only one speed session thus far in this training block, Cain raced today off of pure mileage training. Unlike the past –where she’s primarily taken the fall off from racing or competed just once or twice– Cain will compete multiple times in the coming months. She said more cross country and road races are on her schedule, including the Manchester Road Race on Thanksgiving and potentially some local New York Road Runner events.

“I haven’t run a lot of race-pace this year, and a lot of the buildup has been slower and mileage. I think going into [today] I was probably a little too tentative, so I was often finding myself in no-man’s land and almost not competing enough. I was almost trying to stay within myself more, and I think at the end I kind of felt that a little bit. By that point I had let the gap occur that 400 meters to go you aren’t going to be kicking people down.”

With the transition to Henwood, Cain plans on training her mind as well as her legs. Questioning the pace and her fitness today pigeonholed her in third place, and by the time eventual winner Liv Westphal made her move the race was decided.

“Going into today I think I was a little too conservative and that really showed when they gapped me so hard,” she said. “I think I left it a little too long, obviously, but at the same time that’s what racing is about. Especially cross country, it’s all about learning how to push yourself and learning how to control your effort… I hope that going out here, racing, having fun with it will set me up so each race I can get a little bit more out of myself.

Cain hopes that, combined with Henwood’s advice, will help her return to the World Junior champion form that made her a force on the national and international scene in 2014.

“I hope that by having a nice long cross country season I’m able to really get into the track season knowing I can get everything out of myself on every day,” she said.