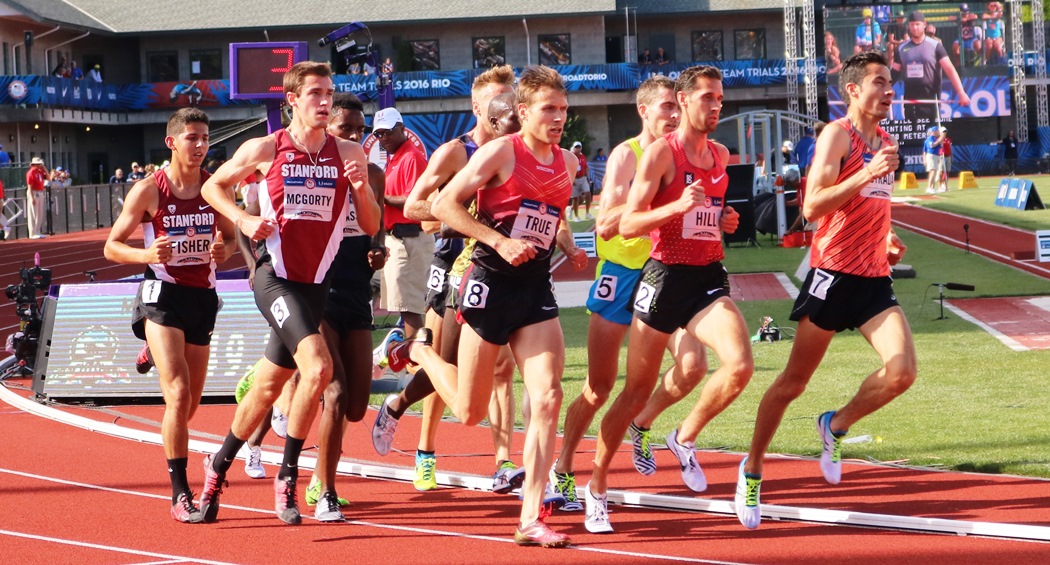 EUGENE, OR (07-Jul) — Once a year Ben True has a race from hell, one that he deems disastrous and forgettable.

In 2015 it came at the USA Cross Country Championships in Boulder, Co., where he was up front before fading to 11th. This year it happened here at the USA Olympic Trials 10,000m. Last Friday, True faded badly due to the oppressive heat and a case of severe dehydration, and finished 11th in 29:04.21 after being in the top six through 6500 meters.

Thankfully, True has already put the race behind him and is focused on the task at hand: finishing in the top three at Saturday’s 5000m final. Recovered, refreshed, and recharged, True spoke with members of the media after his preliminary heat.

“There’s been a few really terrible races in my career. Boulder XC last year, that was definitely, that one’s up at the top. But Friday topped them all on how terrible I felt and just how out of it I was. I’m just happy to have time now to properly recover,” True said following his third place, 13:48.11 performance in the prelim which safely advanced him to the final.

In the 10,000m, True felt bad during the race, though suffered even more post-race. He spent hours in the medical tent, being checked out by doctors and medical staff. It was the first time he’d ever found himself in the medical tent post-race. With doctors not allowed to replace fluids through an IV (as that is against the rules), True was surrounded by ice and continuously drank as much fluid as possible.

“It just hit me hard. Laying down on the ground I couldn’t get up. I was in the med tent for a couple hours but I’m feeling better now and now I have some time to really recover,” he said.

The 10,000m was a race that wasn’t even worth bringing up with his coach or family, too abysmal to put into words. Yet it served to motivate him going into Monday’s 5000m prelim. Closing with a 54.66-second last lap, True tested his speed and was pleased with the outcome. He felt much better in the 5000m, and showed a glimpse of his 3:36.05-1500m speed.

“It was good to have a little redemption after the disaster of Friday. Now I have six days of rest,” he said. “We were jogging for most of it so it was nice we were able to close hard. I was able to sit in the second lane the whole time.”

In the final, True is ready for everything. He assumes the pack will keep the tempo more honest than the prelim, wanting to take the sting out of potent kickers like Portland’s Woody Kincaid and Nike Bowerman Track Club’s Ryan Hill (Kincaid closed in 53.72 and Hill in 54.45). Bernard Lagat, even at 41, still has sub-54 second speed in his legs.

For the first time, True’s wife Sarah –a professional triathlete who has already qualified for the Olympic Games– is in town to watch Ben race at a national championships. Flying from Stockholm, Sweden, to Eugene after placing sixth in the ITU World Triathlon Stockholm event, Sarah came to support Ben. She picked him up in her rental car outside of Hayward Field after his prelim, lovingly throwing her arms around his neck and kissing him before they sped away.

“It’s huge,” he said. “It’s great to have her here and support me and, yeah, I definitely would like to compete in Rio as well.”

Considered a favorite for the podium, True has not dwelled on what happened in the 10,000m and has moved on to the 5000m. Always candid and an outspoken advocate of clean sport, he chalked it up as part of running hard. He’ll be sure it won’t happen in the 5000m.

“It was one of those things that was so bad there’s nothing you can read into it,” he said.