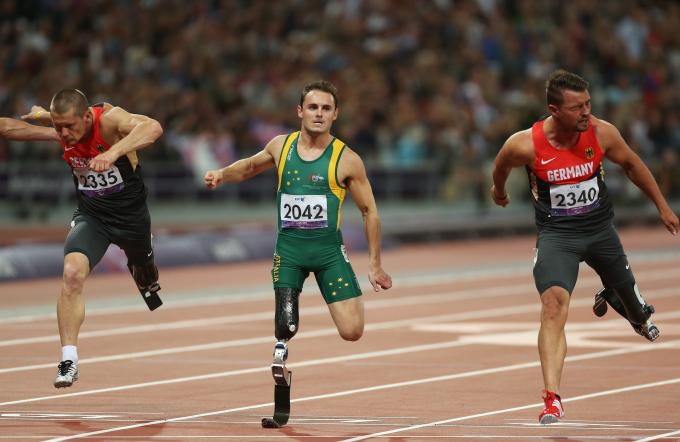 The green and gold are toasting another two world champions at Doha 2015 today, after Scott Reardon (NSW) and Angela Ballard (NSW) delivered at the IPC Athletics World Championships to bring the Australian Flame gold medal tally to six.

Reardon’s victory is an important milestone for the 25-year-old. At Lyon 2013 two years ago he shared the gold medal with Heinrich Popow (GER) and he was determined to stand atop the podium on his own this time around.

“You come to championships to win championships and that’s the most important thing. I probably didn’t get the time I wanted, but when people look back, how I got there won’t matter. It will just show me as world champion, and that’s so exciting,” Reardon said.

“I train my backside off to achieve the best. This is just a motivator for even more. The standard out there was crazy. Two of the faster guys in this event couldn’t be here, but everybody else really stood up and made the race a challenge for us toward the front. I want to take the next step and believe that I can do that, break the 12-second barrier, and hopefully become a Paralympic champion.”

Ballard’s success in the T53 wheelchair 400m ensures that she will head home to Australia with the one-lap gold medal that she so desperately wanted.

The world record holder coming into competition, Ballard today stopped the clock in 57.47 to edge out rivals Hongzhuan Zhou (CHN, second, 57.97) and Lisha Huang (CHN, third, 58.45) in a race to the finish line.

She progressed to the final after placing second in her heat earlier today, with the result adding to the gold medal she also won in the 200m earlier in the program.

“This is the one I wanted. I was so nervous coming in, you try and tell yourself that the worst thing that can happen is a loss and starting again tomorrow, but the reality is that this matters so much. I was so scared before the race, perhaps it gave me the adrenalin to get it done. I’ve just worked so hard for this for so long,” Ballard said.

“I just went out as hard as I could and tried to stay down (low in my chair) into the wind along the back straight. I wanted to stay in my own space. It really hurt from about 250m to home, my technique must have been awful but I was able to bring it home.”

A veteran of the Australian para-athletics team, Ballard is coached by Louise Sauvage and she has been in career best form in recent years. She won four medals at IPC Athletics World Championships in 2013 and the Commonwealth Games crown in the T54 wheelchair 800m at Glasgow 2014.

Adding a fourth bronze medal to the Australian Flame tally, Torita Isaac (Qld) joined Reardon and Ballard on the podium at Doha 2015 today.

Competing in the T38 400m for athletes with cerebral palsy, Isaac, who is also visually impaired, ran strongly into the head wind along the back straight before continuing her form around the bend and into the home straight.

She made every effort to close the gap to second, but it was not to be, with her run of 1:06.06 enough to ensure her third spot and improve on her top-eight finish from the IPC Athletics World Championships two years ago. The gold medal was won by Margaret Goncharova (RUS) in a world record time of 1:02.18.

In other results on day four of the IPC Athletics World Championships:
– Competing for the Australian Flame for the first time, Jesse Wyatt (Vic) threw a personal best of 8.69m to place 5th in the final of the F33 shot put for athletes with cerebral palsy. Competing whilst sitting down and secured to a seat, Wyatt’s series also included marks of 8.49m, 8.18m, 7.87m, 8.12m and 8.46m.

– Advancing to the final after placing third in in heat, Sam Carter (Qld) placed 5th in the round-of-eight in a time of 14.34.

– With just over four laps to go, Kurt Feanley (NSW), alongside Marcel Hug (SUI), broke away from the pack in his semi-final of the men’s T54 wheelchair 5000m to take a convincing lead. He eased off to cross second in a time of 10:55.62 to ensure his start in the final tomorrow.

– Stopping the clock in a personal best time of 22.45 (w: +1.7), Chad Perris (WA), who has albinism and is affectionately referred to as ‘The White Tiger, won his semi-final of the T13 200m for visually impaired athletes to auto-advance to the final tomorrow.