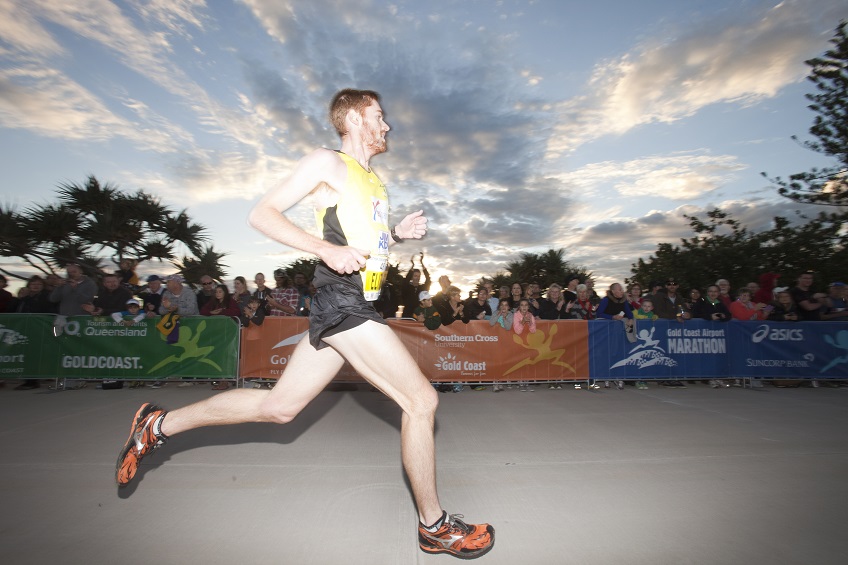 Despite recording a personal best (33:15) and the fourth fastest 10km time in event history, the 31-year-old was denied victory when Olympian Victoria Mitchell beat her to the finish by 16 seconds.

Success on Saturday will be Klein’s first win on the Gold Coast since taking Southern Cross University 10km Run line honours in 2008 but she will be tested by Australian Olympic team triathlon representative Ashleigh Gentle, 25, who will use the race as a final hit out before travelling to Rio de Janeiro.

Gentle, a two-time Southern Cross University 10km Run second placegetter, will return to the Gold Coast Airport Marathon for the first time since 2008, the race won by Klein. In recent years, Gentle’s focus has been on the international triathlon circuit and realising her Olympic dream.

The five-time Zespri Junior Dash winner and 2km course race record holder will make her 10km debut against women twice her age and should she defy the odds and win on Saturday, she will join Australian running legends Pat Carroll and Michael Shelley as the only athletes to snare six victories at a Gold Coast Airport Marathon event.

Australian 3000m steeplechase representative Madeline Hills will take advantage of the Gold Coast’s flat and fast course and run to the halfway point as part of her Olympic Games preparations.

Leading the men’s field will be 2012 Southern Cross University 10km Run second placegetter Hugh Williams who intends to continue his career-best form by adding a 10km victory to his impressive list of personal achievements this year.

Joining Williams as the only person in the field to have run under 30 minutes over 10km will be 25-year-old Andrew Buchanan who finished 37 seconds behind Williams in a personal best time of 29:57 at the Launceston 10km.

Queensland’s Louis McAfee will take a break from training at the Boise State University in Idaho, USA to try to better his sixth place performance at last year’s Southern Cross University 10km Run.

The 19-year-old will be aspiring to become the second person in his family to notch a Gold Coast Airport Marathon title after his mother, Janet, claimed victory in the ninth staging of the 42.195km marathon race in 1987.

The Zespri Junior Dash fields over both 4km and 2km will pit Queensland’s distance runners of the future against youths from more than 30 overseas countries.

In the Zespri 4km Junior Dash, last year’s runner-up Mackenzey Ormiston, 14, from Banora Point, will be hard to beat after finishing in 14:11.

The boys’ race will witness some sibling rivalry with Highland Park brothers Jake and Brock Waugh out to claim family bragging rights and two of the three spots on the podium.

Elder brother Jake, 14, finished sixth last year in 14:05, only nine seconds ahead of Brock, 12, whose result gave him victory in the 11-12 years age category.

The brothers will have to contend with Brisbane teen Jackson Paterson-Wright who is looking to improve on his third place in the race last year in 13:18. Eleven-year-old Max Hooper, who won the 2km race last year in a near race record 6:47, will be stepping up to the 4km start line for the first time.

In the Zespri 2km Junior Dash for 5 to 10 year olds, Birkdale’s Zane Pearce, 10, will be aiming to better his fourth place last year, while 7-8 years age category champion Kody Hockey, now 9, from Murrumba Downs will be one to watch.

The girls’ race will feature a returning Kristin Ramsay from the Gold Coast aiming to better the 8:04 she clocked last year when sixth, and Gemma Hooper from Brisbane, a gallant second in the 7-8 years age category last year.

The Suncorp Bank 5.7km Challenge is all about participation and adding a fun, colourful and family element to some serious racing in the other events at the Gold Coast Airport Marathon.

One of the inspiring family stories coming out of the Suncorp Bank 5.7km Challenge is that of the local Barnes family of Coombabah.

Mother Rachel and sons Riley, 10, and Hayden, 8, will be dedicating their Suncorp Bank 5.7km Challenge to husband and father Shane while fundraising for Cancer Council Queensland.

Shane has been fighting a rare form of cancer called neuroendocrine for the past four years and is undergoing lutate therapy, a new treatment, at the Royal Brisbane Hospital.

With a fundraising drive via Everyday Hero, the Barnes family is on the road to achieving its $4,000 target for Cancer Council Queensland, the official charity of the Gold Coast Airport Marathon for the past 11 years.

Cancer Council Queensland has been extremely supportive to Shane and the Barnes family, helping with accommodation expenses whilst Shane receives treatment.

“I have been receiving counselling and support from Cancer Council Queensland directly, they have been such an amazing support network,” Rachel said.

Brothers Riley and Hayden will be running alongside their mother as a tribute to their dad.

“By running in the 5.7km they are doing something that will not only help to raise vital funds for Cancer Council Queensland but it will also help to create awareness of neuroendocrine cancer.”

Shane and youngest son Jake will be cheering at the finish line as the family completes their challenge.