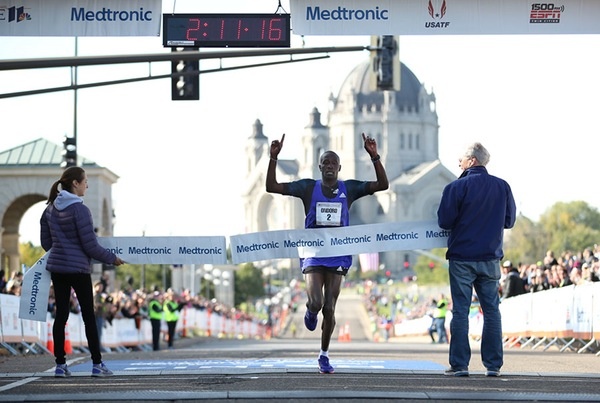 Despite a fast finish, Ondoro fell short of the 30-year-old event record he promised to break, so Phil Coppess’s mark of 2:10:05 endures for another year. Reigning Grandma’s marathon champion Elisha Barno of Kenya finished second in 2:11:39, while countryman Jacob Chemtai was third with 2:14:13.
Bise outkicked reigning Grandma’s women’s champ Jane Kibii of Kenya for the win. Kibii clocked 2:31:44. Abnet Yeshanbel Sime of Ethiopia was third in 2:32:44.

Tyler Byers of Denver, Colo. won the wheelchair competition in 1:58:02. In all, 8511 finished the 34th running of the Most Beautiful Urban Marathon in America.

Earlier in the day, Molly Huddle of Providence, R.I. won the USATF 10 Mile Championships held in conjunction with the Medtronic TC 10 Mile in an event record 51:44. She also won the $10,000 Equalizer Bonus in the handicapped competition between USATF Championship women and men topping Sam Chelanga of Tucson, Ariz., who won the USATF men’s title in 46:47.

“We are so thankful to our volunteers who make the weekend possible and to our runners who choose to run with us year after year,” Twin Cities In Motion executive Director Virginia Brophy Achman said. “It’s an honor to be the host of this great Twin Cities tradition and community treasure.”