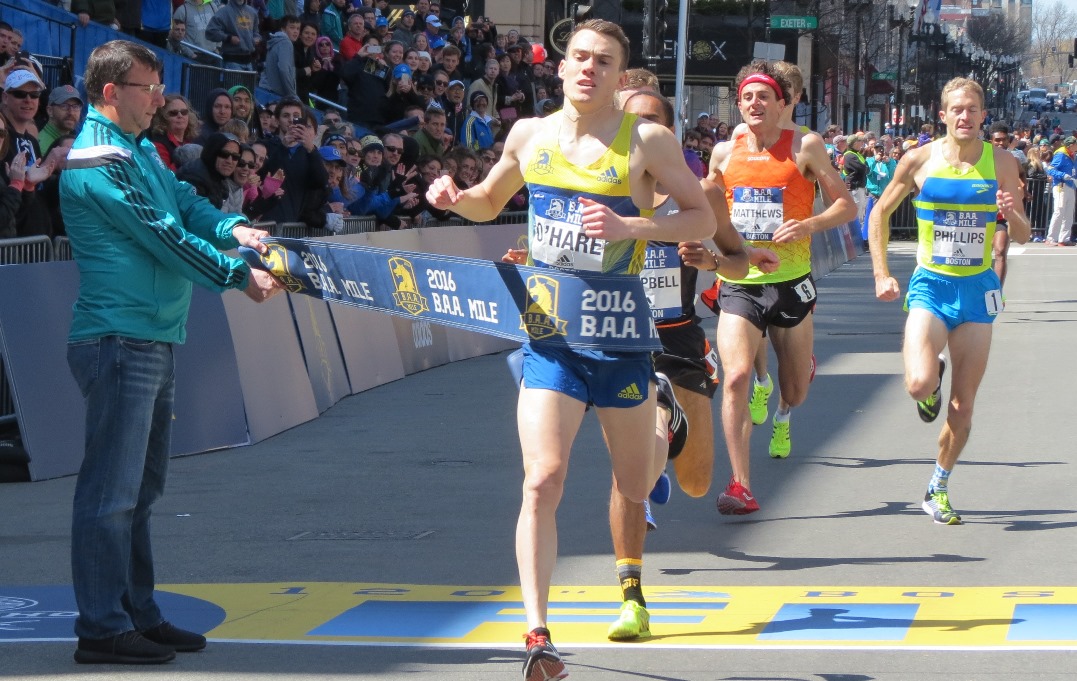 BOSTON (26-Apr) — Chris O’Hare of Scotland and Brook Handler Ann Arbor, Mich., were victorious here today in the eighth edition of the B.A.A. Invitational Mile held on the streets of Back Bay.  In tactical races contested in sunny but windy conditions, both athletes played their cards perfectly, ramping up their pace on the last of the three 522-meter laps, and crossing the historic Boston Marathon finish line first.  Each earned $3000 in prize money.

O’Hare, who lives and trains in Boston under the Boston Athletic Association’s High Performance Team, told the press yesterday that in early-season races it’s hard to know your opponents’ fitness.  The 25 year-old European Championships 1500m bronze medalist said he would treat every man in the 8-athlete field as a contender.

“You know, I didn’t want to get stuck behind people that, maybe, I’d beaten before, but I think I can beat,” O’Hare told the media after the race.  “This time of the year, people are sharper than I think they could be, and I had to treat everyone with sufficient respect and do my best.”

O’Hare followed the early leader, Frezer Legesse of Bloomington, Ind., on the first lap, joined by former University of Arkansas star, Kemoy Campbell of Jamaica.  There was little change on the second lap, and O’Hare assessed his situation.

“I was going to plan on waiting for the backstraight (Newbury Street) to make my move, but I could sense that there was a lot going on down the (Boylston Street) straight with a lap to go,” O’Hare explained.  “I didn’t want to get swallowed up.”

Picking up the pace early in the final lap, O’Hare went to the front with Campbell in pursuit. His lead slowly widened as he upped the tempo, and by the time he made the final left-hand bend to the Boylston Street finish straight, he was already the clear leader.

“I just kept winding up, winding up and tried to hold the lead and it paid off,” O’Hare said.

O’Hare crossed the finish line in 4:10.2, slower than the 4:07 he ran last year which was only good for second place.  Campbell got second (4:10.6) and Trevor Dunbar was was third (4:11.0).  For Campbell –who drove to Boston from Arkansas because he will now be living and training here– the race was a great way to open his outdoor season.

“I had a lot of fun doing that,” Campbell said smiling.

Handler, who finished seventh in the NCAA Championships in the 1500m last June when she was still attending the University of Michigan, used the experience she gained in four small road miles in Michigan last summer to upset Heather Kampf of Minneapolis, the three-time USA road mile champion.

“I got lucky that I was able to keep doing a few road miles last summer because they have so many in Michigan,” Handler said.  She continued: “It was nice that this wasn’t my first one.”

Handler, 23, knew that if she could stay with Kampf then have the inside position on the last turn she would have a chance to beat here much more experienced rival, widely known in running circles as “Queen of the Road Mile.”  Following the advice of former University of Michigan coach Ron Warhurst, Handler shot ahead at on Newbury Street to set herself up for that all-important inside line.

“I made my move there and I was really lucky that I did,” Handler explained.  “By the time I turned we were duking it out.”

Kampf made the final turn on the outside, Handler got a step on her, then Kampf stumbled (perhaps in a rut in the road, she said), briefly losing her momentum.  That was enough for Handler to stay in front and win by half a step in 4:49.6.  Kampf was timed in 4:49.8, and Emily Lipari got third in 4:50.0 with a strong final sprint.

“This course is definitely an execution kind of a race,” said Kampf who was both diplomatic and disappointed.  “I’ve run it enough now to know where you need to be in the final two turns to win it, and I’ve been just off of it a couple of times.”

Handler, who is coached by Mike McGuire, was thrilled to get the win and her first meaningful road racing paycheck.

“I’ve never come close to beating Heather,” Handler gushed with genuine amazement  “She’s a phenomenal road miler.  I look up to her a ton.  I wasn’t expecting to come away with the win even when I was 20 meters from the finish.”

The high school invitational miles were won by Rebecca Grusby of Newton in 5:29.1, and twins Thomas and Matt D’Anieri of Wellesley who were both timed in 4:33.1.