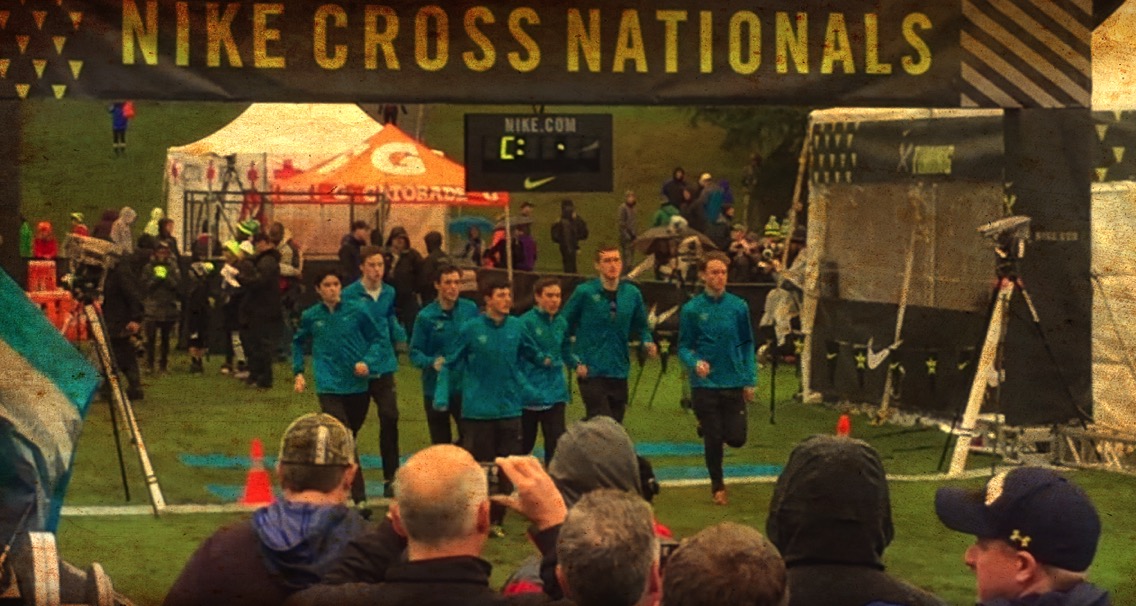 OAKLEY, CLINGER RUN AWAY WITH TITLES AT NXN CHAMPIONSHIPS

(03-Dec) — Colorado’s Brie Oakley put down the hammer at the Nike Cross Nationals championships for high school harriers, dominating the girls field by 28 seconds to win the 5 km race in Portland, Ore., in 17:10.1. Despite a late fall, Oakley left no question as to who would walk away with the champion’s trophy.

A senior from Grandview High School in Aurora, Colo., Oakley’s short and compact stride was perfect for the wet and slightly muddy course at Glendoveer Golf Course. Through the mile in 5:20, Oakley’s five-second lead quickly grew to 100 meters as she approached the three-kilometer checkpoint (10:09). At two miles, the gap was 25 seconds.

“I thought it was going to be a lot closer than it was, but I wanted to go through the first mile staying back and then just kind of decided down that hill to shoot ahead and not look back,” said the Cal. Berkeley bound harrier.

With the sizable lead, Oakley’s performance impressed the professional athletes on hand, including three-time USA cross country champion Chris Derrick. “She’s very good at running,” a stunned Derrick said on the broadcast, lost for adequate words to describe the performance.

Not even a fall in the final mile could stop Oakley. With both knees muddied, she crested the final two hills all alone before the finish. “I think I just got really excited and got ahead a little ahead of myself. I got back up and surged ahead,” she said, clutching the winner’s trophy.

Placing second was Oregon’s Ember Stratton in 17:38.2, with Colorado’s Lauren Gregory third, a step back in 17:39.8. Stratton, a sophomore, formerly ran for the Bowerman Track Club’s youth team, and was coached by professionals including the aforementioned Derrick. But Oakley stole the show today.

Like 2016 Olympic 1500m gold medalist Matthew Centrowitz, Oakley was a soccer player and only turned to competitive running 15 months ago.  Oakley left soccer behind and has quickly become one of the best preps in America.

“It’s definitely one of the best choices I think I’ve made in my life!” she said. Moments later, Oakley turned her attention to the future. “Obviously I’m really happy with what I did today, but I know there’s still a lot more to come. I’m excited to go to college next year and race against all the girls like Katie [Rainsberger, last year’s NXN champion who was on hand at the awards platform] and everyone else in the Pac-12. I’m really excited for that.”

For the tenth time in eleven years, the girls of Manlius XC (representing Fayetteville-Manlius High School of Upstate New York) took home the national team title. Blowing the field away with a mere 41 points, Manlius finished ahead of Davis, Calif. (181 points) and Temecula, Calif. (185 points). Manlius was led by freshman Claire Walters, 20th overall (and second among athletes eligible to score for teams) in 18:05.7.

The Boys NXN title would also be decided in bold runaway style, as defending champion Casey Clinger of American Fork XC (Utah) distanced himself from the field after hitting the second mile. Clinger, a senior, became the first boy to win back-to-back titles in NXN history by going away in 15:28.4. The victory was made all the sweeter as Clinger’s American Fork squad claimed second place in the team standings.

“My team has literally been on this journey every step of the way. Just sharing this with them and scoring for my team, being part of something special, it’s been amazing,” said Clinger, who entered the meet ranked No. 1 in the nation by Dyestat.

Through the mile in 4:52 and two miles in 10:00, Clinger sat among a tight front pack that included Seth Hirsch (Nebraska), Brodey Hasty (Tennessee), Sam Worley (Texas) and James Mwaura (Washington). Though Mwaura attempted to surge and break the field, Clinger responded minutes later with a burst of his own that only Hirsch could immediately respond to.

But Hirsch’s luck changed quickly as Clinger powered on. Looking like a seasoned veteran, Clinger covered the last mile with ease and distanced himself from the field.

After breaking the tape, Clinger immediately turned back to watch how his teammates finished. What he saw was a cluster of American Fork harriers crossing within a minute.

“I love looking around in the race and seeing my teammates run next to me. I know that everyone’s worked hard and I’m very anxious for this team score because it’s a lot more fun racing as a team,” Clinger said while he waited to hear the final scores. “Seeing my guys gives me awesome motivation.”

Yet it was the team from Bozeman, Mont., which snagged the team title over American Fork, 105 points to 141. Brentwood of Tennessee was third with 163 points.

“This is unbelievable,” said one of the Bozeman athletes, gripping the giant NXN team trophy. “We’ve talked about it during the season, but it’s unreal. It’s totally unreal.” Leading Bozeman was senior Chase Equall in 16:08.4 (26th overall, 8th among team-scoring athletes).

Rhode Island’s DJ Principe, who entered the meet as a favorite, finished a distant 21st in 16:01.5. Broadcaster Rich Gonzalez reported that Principe may have been battling an illness in the days leading up to the race, and that could have impacted his placing.