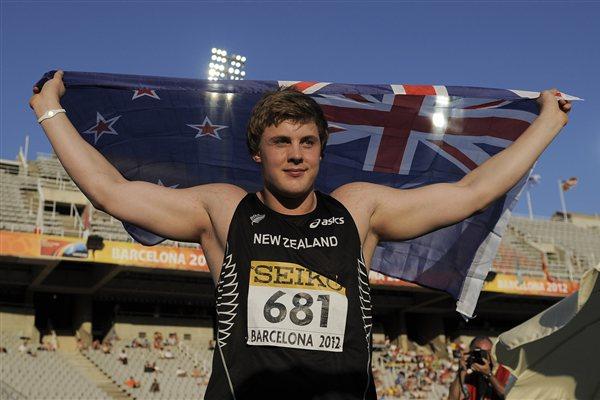 Tom Walsh and Jacko Gill both automatically qualified for the final of the shot put with their first round attempts in the qualification groups at the 2017 IAAF World Championships.

Walsh was out to a season’s best of 22.14m, just seven centimetres short of his New Zealand national record, and was the best from the 32 in the two groups. Gill was in the other group and qualified before Walsh with the fifth best throw from the two groups of 20.96m. Automatic qualifying was 20.75m.

Walsh said it is simple when you qualify the way he did.

“I’m really happy with having the best throw, the ease of it, the smoothness of it, bodes well for the final,” said Walsh.

“I didn’t think I’d throw that far this morning so it must mean that I’m going to throw even further tomorrow night,” he added.

“I was just concentrating on the freedom, moving really well off the back and nice and full and it was just so smooth and exactly what I needed.”

“I’m also pleased for Jacko, the first of any of the throwers to qualify. It’s really good for him to get through on number one throw and every time he comes to a major he just keeps getting better and better.

Gill said his performance was okay.

“The warm ups weren’t very good only had one over 19.50m, but that didn’t matter as I did alright,” said Gill.

“My technique was a little bit off but I had a lot of adrenalin and power behind it and gave it everything I could and I wasn’t expecting it to be that far.”

“I’ve never qualified on my first throw before, at world juniors or anything, so I couldn’t have asked for more, this is ideal,” he added.

“I’ll be after over 21 metres in the final, and I think there is a really good chance of doing something pretty good for the country.”

David Storl of Germany who held a number of age group shot put records that Gill later broke, said it was a good performance from both Walsh and Gill.

“Good qualification from both of them,” he said.

“I’m happy with my 21.41m it is a good first throw and was enough for the qualification mark,” added Storl.

“It wasn’t my best or prettiest throw, but I can’t complain with a first round qualifying it is what I came out here to do, so I got the job done and I’m excited for tomorrow night,” said Crouser.

“Me and Tom are good friends and he threw really well this morning so I think it is a sign that there should be some far throws tomorrow night,” he added.

There were some anxious moments for Joe Kovacs, 2015 world champion and silver medallist at Rio, who qualified 10th with 20.67m.

Julia Ratcliffe did not qualify from the qualifying rounds in the hammer throw, finishing 14th out of 16 in her group and 26th overall. Requiring a throw of 71.50m for automatic qualification for the final, Ratcliffe opened with 64.67m, followed up with 64.72m and finished with 61.88m.

“My performance wasn’t great, but I’m not going to cry about it as I’ve got the world uni games in a couple of weeks so I’ve just got to turn around and have redemption to it,“ said Ratcliffe.

“Where the force was wasn’t quite right, but you’ve just got to go for hell and hope it goes right and if it doesn’t there’s always the next time,” she added.

Malwina Kopron of Poland was the best from Ratcliffe’s group with 74.97m.

The next Kiwi in action will be Camille Buscomb in the 10,000m final on Sunday morning NZ time.