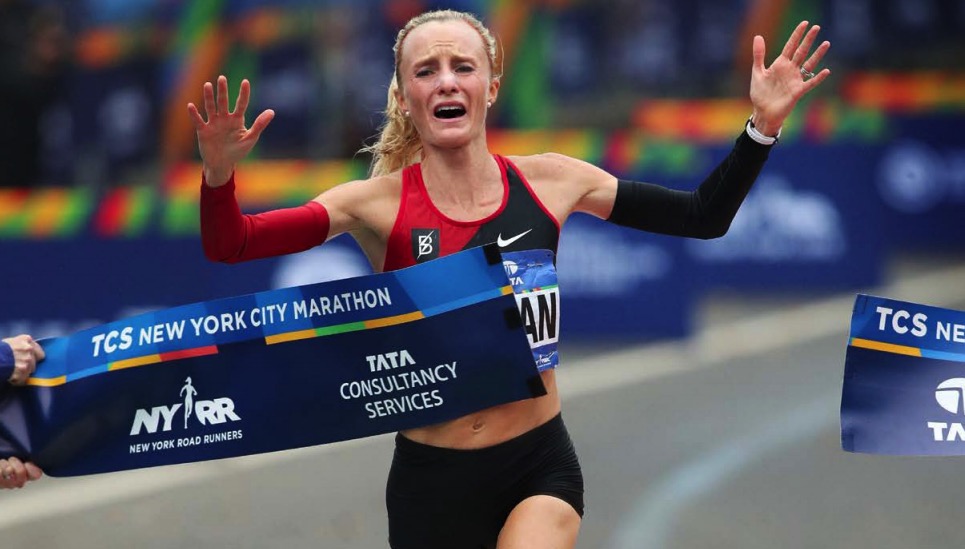 New York, September 19, 2018 – Today, New York Road Runners (NYRR) released its annual Impact Report for Fiscal Year 2018 (April 2017-March 2018), which illustrates the organization’s commitment to make fitness and the sport of running accessible to people of all ages and abilities.

The report can be found at: http://bit.ly/NYRR_WeRunWeRise

Titled We Run. We Rise., NYRR’s latest impact report highlights the nonprofit’s commitment to elevating the communities it serves with free and accessible community fitness programs and world-class running events. From its origins as a 40-person running club in the Bronx’s Macombs Dam Park, NYRR has become the world’s premier community running organization. Celebrating its 60th anniversary this year, NYRR annually serves nearly 600,000 runners of all ages and abilities from around the world.

“New York Road Runners’ mission is to help and inspire people through running, and that statement drives everything we do as an organization,” said Michael Capiraso, president and CEO of NYRR. “Through our work, I have truly witnessed the transformative power of running. Whether running alongside the more than 50,000 runners who take part in the TCS New York City Marathon or visiting a group of Rising New York Road Runners for their weekly practice, I see clearly that running can have a deeper impact on all of us.”

During the program’s first year, kids from 48 states plus Washington, DC logged more than four million hours of activity, which equates to approximately 18.5 million miles run. Additionally, more than 7,000 pairs of brand-new running shoes were distributed to program participants through 1 for You 1 for Youth, a joint initiative by NYRR and New Balance designed to give all kids access to the footwear they need to get moving. For every pair of shoes sold at the NYRR RUNCENTER featuring the NB Run Hub, New Balance Donates a pair to NYRR’s youth programs.*

NYRR’s focus on creating a happier and healthier community has no age limit, and the organization offers free, weekly walking sessions through NYRR Striders. Taking place in senior centers, community facilities and neighborhood parks across New York City, sessions include coach led walks, stretches and drills, and discussions on nutrition and healthy living. Last year more than 2,000 people ranging in age from 50 to 105 took part in NYRR Striders.

“New York Road Runners strives to give people everywhere a reason to run,” said Peter Ciaccia, president of events at NYRR and race director of the TCS New York City Marathon. “The foundation of New York Road Runners is its events, and we are committed to delivering the best possible experience to runners, fans, and communities alike. Last year we were joined by runners from around the world at the 50-plus events we produce across New York City’s five boroughs, including our crown jewel event, the TCS New York City Marathon. The more than 50,000 finishers of last year’s marathon are a true representation of the diverse running community we serve.”

On November 5, 2017, the international community of marathoners once again embodied the spirit of New York City, from Shalane Flanagan, the first American woman to win the women’s open division in 40 years, to the final finishers to cross the historic finish line in Central Park. The field of more than 50,000 runners, once again making up the world’s largest marathon, represented 139 countries and all 50 states, plus Washington, DC and Puerto Rico.

We Run. We Rise. also highlights the new and innovative products and services NYRR introduced over the past year to elevate the vast online community of runners around the world. With the introduction of NYRR Virtual Racing Powered by Strava, NYRR is now able to connect with runners from across the globe more frequently and support them on every step of their journeys. Motivated by the opportunity to set and achieve goals as part of the online running community, more than 8,500 people have entered an NYRR Virtual Racing event, with proceeds directly benefiting NYRR’s free youth and community programs.

With 60 years under its belt, NYRR has solidified its status as an organization and community of trailblazers within the sport of running. From the introduction of the first-ever all-women’s road race in 1972, to the establishment of the Rising New York Road Runners Wheelchair Training Program in 2016, the organization is continually looking for new ways to elevate the communities it serves and plans to continue this commitment as it moves forward to the 2018 TCS New York City Marathon on November 4 and beyond.