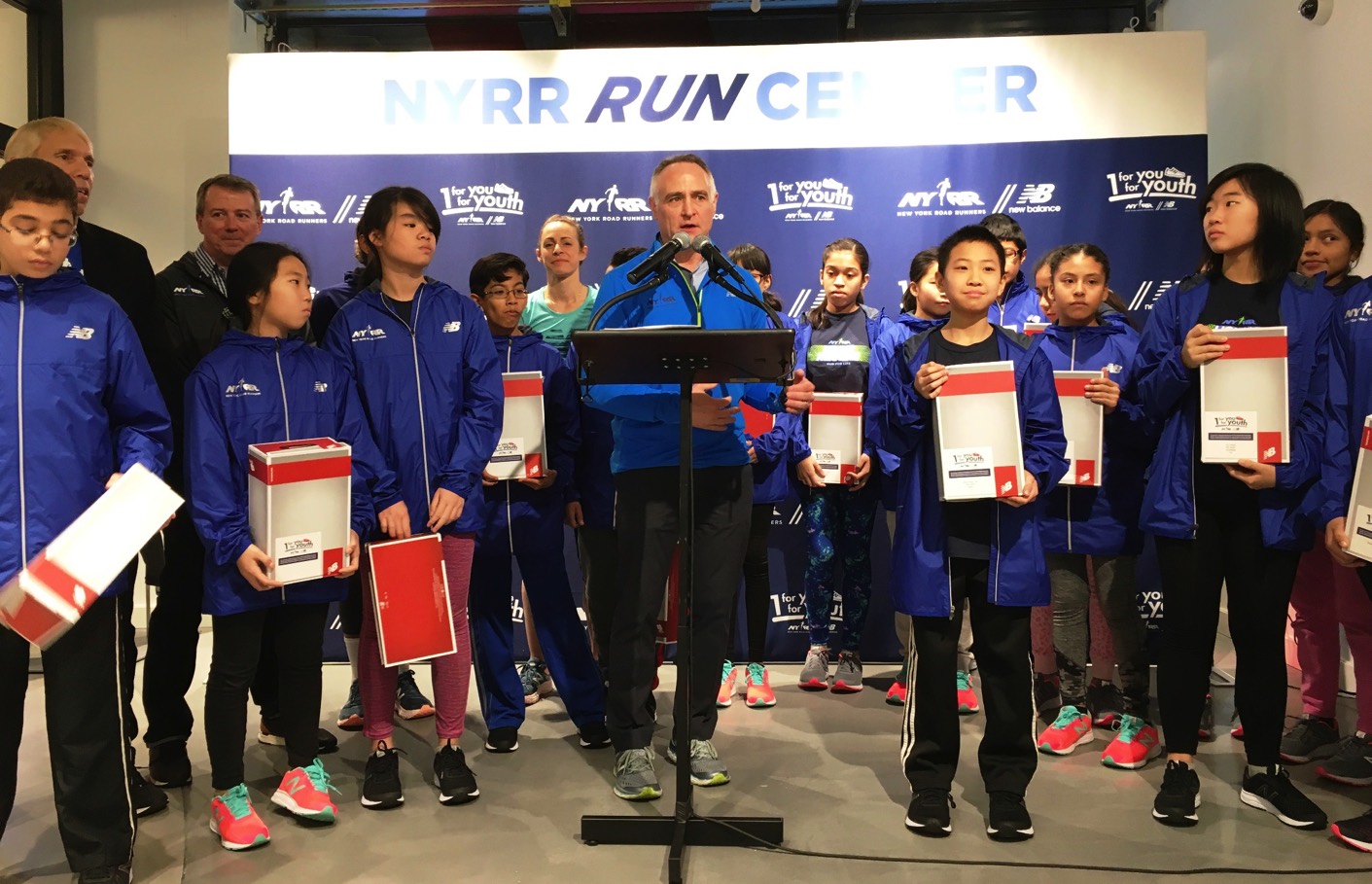 “My absolute favorite thing, and what struck me when I came this morning, is how I see the pictures and recognize the faces, and I remember the events,” said 2016 Olympic 1500m bronze medalist Jenny Simpson who visited the center today.  “So, when you become part of the New York Road Runners community, you just feel very much a part of what they are doing.  So, the familiarity, the love of the people on the walls, that’s what really struck me when I walked in the door.”

The RUNCENTER has been nearly a decade in the making, officials said, and is the product of a unique partnership between New York Road Runners, America’s largest not-for-profit running race organizer, and New Balance, the Boston-based designer and manufacturer of running shoes and apparel.  Last year, the two organizations signed a long-term marketing agreement, paving the way for opening the RUNCENTER.

“We have been talking about building a run center, possibly ten years in the works,” said NYRR president and chief executive officer, Michael Capiraso.  He continued: “The whole idea is to bring the community together.”

Set in a long, multi-level space, the RUNCENTER and New Balance Run Hub can be used daily by runners and other visitors.  The facility includes 78 day-use lockers, for runners who need to store their belongings while out on a run, and there are four changing rooms.  In the NYRR Running Lab, supported by sponsor TCS, there are touch screens to allow runners to search for their TCS New York City Marathon results (from any year), and view weekly race course maps.  There is even bleacher-style seating called the Borough Steps which seat up to 100 runners for events at the running lab, or just to hang out a few minutes prior to their runs.  There is even free wi-fi provided by TCS.

“We have an incredible partner in New Balance who saw the vision and helped bring it to life,” Capiraso added.  Another NYRR official, runner services chief Christine Burke, described the space as “7000 square feet of runner nirvana.”

Probably the most unique feature of the space is the Run for Life Wall, featuring eight 48″ video touch screens.  The wall has an interactive feature with videos of Jenny Simpson which invite guests to perform exercises with Simpson, mimicking the 2011 world champion’s motions on the screen.  Simpson demonstrated the system for the media today.

Finally, the RUNCENTER has a direct charitable component as part of NYRR’s mission to improve the lives of people through running and walking, especially children.  Under the “1 For You, 1 For Youth,” program, New Balance will donate a pair of shoes to a participant in one of NYRR’s youth programs for every pair sold in the New Balance Run Hub.  NYRR’s free youth running programs serve 215,000 children in nearly 900 schools and community centers in New York City and nationally.

“There’s no better spot,” observed NYRR president of events and TCS New York City Marathon race director, Peter Ciaccia who, like Ciaccia, is a longtime runner.  “This will be the hub for runners to come.”

Main PHOTO: Children enrolled in New York Road Runners youth programs show off their free New Balance running shoes received under the 1 For You, 1 For Youth program at the opening of the NYRR RUNCENTER on January 11, 2017.  Michael Capiraso, NYRR president and CEO, is at the center; Peter Ciaccia, NYRR president of events and race director of the TCS NYC Marathon is at the far left; second from left in the back row is New Balance president and CEO Rob DeMartini; just over Capiraso’s right shoulder is 2016 Olympic 1500m bronze medalist Jenny Simpson (photo by David Monti for Race Results Weekly)