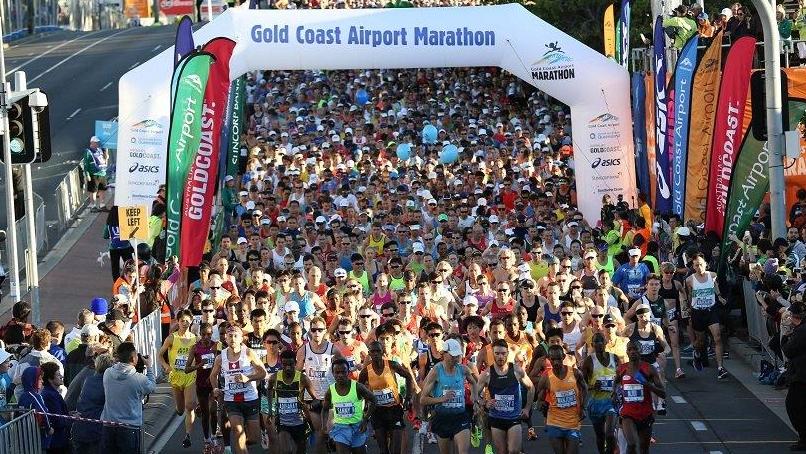 This year’s 39th annual Gold Coast Airport Marathon will feature a rematch between Kenya’s Kenneth Mungara and Japan’s Yuki Kawauchi, the two road warriors who last year fought out the closest finish in the event’s history.

Mungara will come to the Gold Coast in great form again after posting a runner-up finish at the 2017 Milan Marathon (Sunday 2 April) in Italy in 2:09:37 – the race that has become his traditional lead-up to the Gold Coast.

On the same day, Kawauchi notched his sixth marathon since last year’s run on the Gold Coast and placed sixth at the 2017 Daegu International Marathon in South Korea (2:13:04). He will build up to the Gold Coast Airport Marathon by racing in May’s Prague Marathon and June’s ASICS Stockholm Marathon.

“Last year’s dramatic finish between these two champions was one of the most memorable in the event’s history and I’m thrilled to welcome both men back to the Gold Coast in July,” Mr Hart said.

“These two great runners, along with the rest of the elite field which will be announced shortly, will put the race record under threat and vindicate our position as Australia’s fastest marathon.

“Our ability to attract first-class international elite runners is a testament to the standard of our event and our flat, fast course located in one of the world’s most popular holiday destinations.”

Last year Mungara added to his 2015 victory when he won an epic showdown with Kawauchi by a single second, breaking the finish tape in 2:09:00.

The win put Mungara in illustrious company as he joined compatriot Fred Kiprop (1998/99) and Queensland running legend Pat Carroll (1984/85) as the only back-to-back winners of the men’s Gold Coast Airport Marathon.

If he can win again this year, it will be the first hat-trick by a male in the Gold Coast Airport Marathon and equalling the female feat set by Gold Coast local Margaret Reddan from 1984-86.

Mungara, the 43-year-old former barber, won his first Gold Coast Airport Marathon in 2015 in 2:08:42, a time that remains the fastest ever run on Australian roads.

“The course is good and the race is well organised and that is important but it is also important to feel the excitement of the people,” Mungara said.

“I like the Gold Coast Airport Marathon course, the people and the post-event activity like seeing and interacting with the exotic Australian animals.”

With three months to go until the next edition of the ‘duel by the pool’, Mungara is looking forward to clashing with Kawauchi and the other elite runners on the Gold Coast.

“Yuki is great,” Mungara said. “He competes and races all the time as well as works. He is a fantastic gentleman and I am looking forward to seeing him again.”

Mungara said he would love to win a third Gold Coast Airport Marathon and set another world masters record.

“If pacemakers do the job and the weather cooperates, running fast on the Gold Coast is possible,” Mungara said.

“I would love to set another marathon (masters) world record, that’s for sure.”

Kawauchi will be making his sixth consecutive appearance at the Gold Coast Airport Marathon and gunning for his second victory.

The popular 30-year-old runner’s effort last year, along with his 2013 victory in 2:10:01, are two of the 10 fastest marathon times ever recorded in Australia.

This year’s race will have extra significance for Kawauchi as it will provide vital preparation for the IAAF World Championships in London a month later when he will represent Japan.

He qualified for the World Championships by placing third in December’s Fukuoka International Marathon in 2:09:11.

“For me, the Gold Coast Airport Marathon, as a IAAF Gold Label race, is a very important race every summer,” Kawauchi said.

“This time (2017) it is very special for me as it will be my final race prior to the London World Championships.”

Kawauchi said the Gold Coast Airport Marathon continued to be very popular amongst Japanese runners because of its calendar date, course and conditions.

“Because there are no races in Japan and the northern hemisphere during our summer, marathon runners from Japan are always very keen to join the Gold Coast Airport Marathon,” Kawauchi said.

“The Gold Coast Airport Marathon offers a very attractive race with no time difference, a flat course and good weather conditions, which are very good for a runner’s body and health.”

The confirmation of these two combatants is likely to attract significant public interest if social media is anything to go by. A video posted last week to Facebook of the epic finish from last year generated more than 640,000 views and 4,400 shares.

These two runners will head a long list of elite runners to be confirmed during the coming months leading into this year’s race.

To enter or for more information visit goldcoastmarathon.com.au