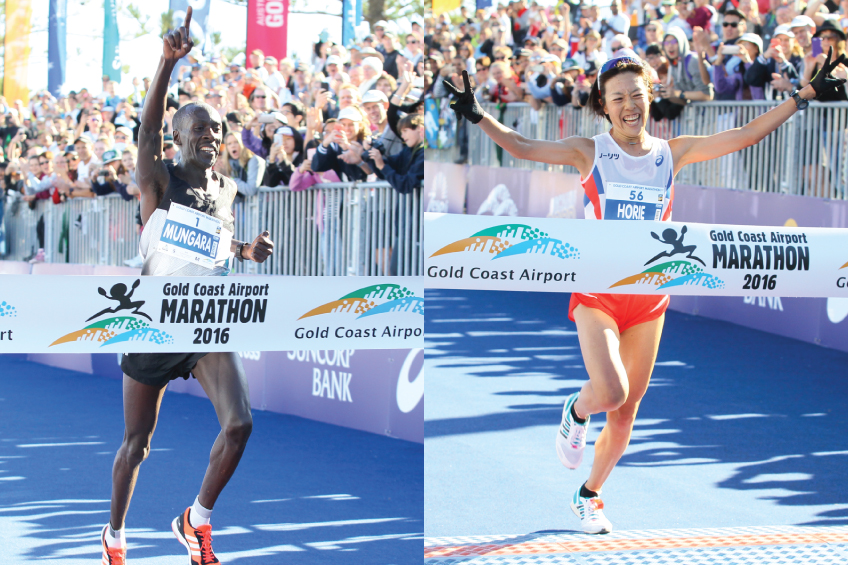 Mungara (2:09:00) had to work for his win, which only came about after a fierce 15 kilometre battle with eventual second placegetter and 2013 winner Yuki Kawauchi from Japan, who fell just one second short of his own Gold Coast double (2:09:01).

After the battle that was had on the course, it was fitting that the finish was the closest in the history of the men’s race.

And in a day of sensational results, Abdelhadi El Hachimi did his chances of representing Belgium at the Rio 2016 Olympic Games no harm by finishing third and posting a qualifier with a personal best time 2:10:35.

The men’s race was a classic race of two halves as a field of eight went through to 25km mark together.

Then the real race-within-the-race developed as the ‘citizen runner’ Kawauchi took it upon himself to make things happen.

Kawauchi made a telling break and looked set to dictate terms over the closing kilometres before last year’s winner Mungara took some initiative of his own and claimed the lead.

For the next 10 kilometres their stubborn tussle saw the rest of the field fall well behind. A pattern had been set with the two running as a duo and the lead changing a number of times.

At the 40 kilometre mark it was obvious it was going to be survival of the fittest to the line and in a famous sprint finish, the 42-year-old Mungara prevailed.

He said it was with a measure of divine intervention.

“It was all thanks to God,” he said. “I thought I could do something to win this thing.

“When everyone’s tired, I have to push myself; I have to make it so I can push to finish it.”

When Kawauchi made a break at the 30km point, Mungara knew he had to reel him back in.

“I saw Yuki going alone, so I had to work with him to chase him. I realised I could do something.

“[Earlier] I was waiting for him to come, so I could relax, so we could push together.

“When I feel I am okay, like I did today, I start making my move,” he said.

Mungara said he sometimes gets daunted when leading close races, but manages to shake it off when it counts.

“It gives you a headache because you don’t know when they may try to overtake you. You have to do another fast calculation.

“[But] you can’t think about who is behind you because there’s no point. They’ll always be behind you.

“If you think like that it will get to you,” he said.

Mungara was also slightly daunted by the cool conditions.

“In the morning I didn’t think I could make it because it was very cold. But the guys kept getting fewer and fewer and I started thinking I could do it.

He already had his sights set on a three-peat.

“I want to win again next year, to target my time,” he said.

Kawauchi saw a silver lining in his second placing.

“Of course I’m a little bit disappointed that I couldn’t quite get the win, but this is my first time breaking two minutes and ten seconds in over one year and a half and I’m really, really happy,” Kawauchi said.

He admitted the match race left him with nothing in the tank at the end.

“That was really one hundred per cent.

“If I had anything left I would have had the last kick to win it, but I am one hundred percent satisfied with what I did today,” he said.

El Hachimi enjoyed his Olympic qualifier and was relieved he ran with the lead group in the early stages.

“I’m really happy with how I raced today and I also ran a personal best time which I’m happy about.

“I came here to run two hours and 12 minutes. I took the risk to go with the first group instead of the second one.

“I really like running on the road and my muscles feel really good for Rio,” he said.

“This is my first time doing a marathon at this time of year.

“I don’t know if I would say I was really confident, but I just came into it really wanting to take on the challenge of doing a marathon at a different time of the year,” she said.

“I was certainly conscious that I had the potential to make the five in a row for the Japanese women, so I was thinking about that.

“If I had the opportunity I would certainly love to come back to the Gold Coast,” she said.

Second placed Chala was not comfortable in the heat of the morning and had some leg worries during the race.

“The running today was great, but the sun was very strong,” Chala said.

“I was struggling with the sun and with the weather and finally I was feeling numb on my leg, so I wasn’t able to move sometimes.

“I was really, really worried about my leg. It’s OK now, but it still feels a bit numb,” she said.

In the IAAF Oceania Area Marathon Championships, it was a New Zealand double with Paul Martelletti (2:18:57) and Katie Kemp (2:40:05) claiming the spoils.