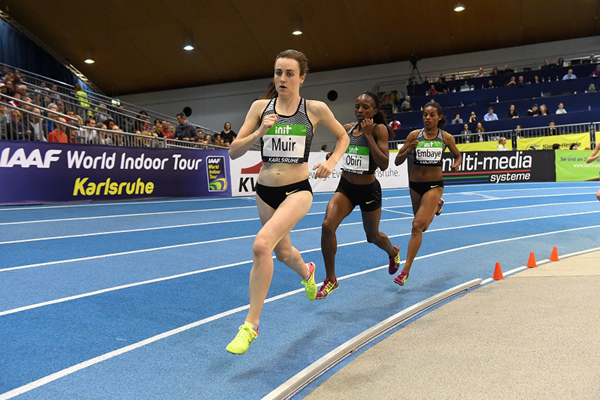 Muir, the 23 year-old Scotswoman who owns the fastest times in the world this year at both 1000m and 3000m, did not attempt to win the second of two heats contested here this morning.  Following the instructions of her coach Andy Young, Muir let eventual winner Yasemin Can of Turkey bolt away in the final kilometer, and only displayed a controlled final sprint to the line.  Finishing fifth in 8:55.56, she apprehensively looked up at the scoreboard to see that she was the fastest of three time qualifiers.

“She did well to conserve some energy,” Young explained to Race Results Weekly in a text message.  “I could see her itching to move into the top four.  But, I was down track-side shouting, ‘just top seven!’ to her, realizing that top-seven in sub-9:13 was all that’s required.”

Conserving energy is critical for Muir who has three more races ahead of her at these championships.  This afternoon, she lines up for her preliminary 1500m race at 17:05  Should she advance, she will contest the 1500m final tomorrow afternoon, then the 3000m less than 24 hours later.  Young said that she is recovering very well from today’s race.

“I had her sat at lunch table in the hotel within 30 minutes of her crossing the finish line, and that included a one-mile warm down,” Young explained. He said that his goal was “to get (her) as fueled as possible before the 1500 later on this afternoon.”

Two more British runners, Steph Twell and Eilish McColgan, also advanced to the final.  Both athletes finished second in their heats.  Twell ran 8:55.02 in the second heat while McColgan ran 8:57.85 in the first, despite battling a virus during the last two weeks.

“I had blood tests that came back that I had a virus, but they didn’t know what it was,” McColgan told reporters.  “It wasn’t anything major; just a head cold, a sore head.  Just tired; I was sleeping like 12 hours a day.  I was practically hibernating.”

The last British woman to win the 3000m at these championships was Helen Clitheroe in Paris in 2011.

Other athletes with medal hopes who advanced included Germany’s Alena Reh, Sweden’s Charlotta Fougberg, Italy’s Giulia Viola and the Netherlands’ Maureen Koster, who won the first heat with ease in 8:57.52 after pulling away in the final 400 meters.

“I was really a bit restless to take over,” Koster told Race Results Weekly.  “But I need to wait, just like me and the coach discussed, and I did.”

“You know, everyone in this race is a top-quality runner,” Hinriksdóttir said after greeting this reporter by name.  “You’re always stressed, even though it’s just heats, you know?  I was happy how it worked out.”

Like Muir in the 3000m, defending 800m champion Selina Büchel of Switzerland was content to run in the pack and conserve energy.  Running in the last of four heats, she was second to last at the 400-meter mark, gently moved up in the third lap, then sprinted to victory coming around the final bend.  Unpressed, she stopped the clock in 2:03.11.

“It’s important to save the energy for the next round,” Büchel told Race Results Weekly.  “I just wanted to get to the next round, and I’m happy to be there now.”

In men’s 800m qualifying, Poland’s Adam Kszczot –now sporting a man-bun and a beard– won the last of four heats with a well-timed, late-race surge. Kszczot, the gold medalist from these championships in 2011 and 2013, ran at the back of the field for the first two laps, moved up to third at the bell, then powered away for the win in 1:48.37.  Speaking to reporters, Kszczot liked his chances in the next two rounds.

“I felt confident before the heats, but now I simply feel more confident,” he told Race Results Weekly, speaking in English.  “Tomorrow, the qualification rule is the first three fastest, without times, without small q’s.  It’s really good for me.  I’m fast, especially in the second part of the race.”

The fastest time on the day came from Sweden’s Andreas Kramer who won the first heat in a personal best 1:46.86, the fastest time ever recorded in a first round at these championships.  The tall and lanky Kramer took advantage of a fast early pace set by the Netherlands’s Thijmen Kupers, who hit the 400m mark in 50.87.  Kupers said he wanted to make sure he posted a fast time, just in case he didn’t finish in the top-2.

“The first two go through of four heats, and (then) four times fastest,” Kupers explained with a laugh.  “So, if you run fast, the whole heat could go through to the semi-finals.”

Other athletes with medal hopes who advanced included Amel Tuka of Bosnia and Herzegovina, Andreas Bube of Denmark and Kevin López of Spain.

Action resumes here in Kombank Arena later today with the opening rounds of the men’s and women’s 1500m, and the men’s 3000m.