With less than a week to go, tens of thousands of runners are embracing the sentiment of “Your City Your Run” and gearing up for Australia’s largest marathon, the Medibank Melbourne Marathon Festival, taking place Sunday October 14.

More than 30,000 adrenaline junkies are expected to take part in the Festival, which includes a $20,000 first prize for both male and female winners of the 42.195km race. For those not ready to tackle the track in its entirety, there are four other distances that showcase the city’s most iconic landmarks, designed to cater to a range of abilities.

Sri Lankan Airlines are onboard with the 21.1km Half Marathon and committed to helping runners realise the sky is the limit. This event halves the distance but not the enjoyment. Entrants loop around the classic icons of the full Marathon including Flinders Street Station, Albert Park Lake, Alexandra Gardens, and crossing the finish line to the sound of 35,000 cheering voices in the MCG.

The ASICS 10km Run is perfect for those wanting to smash double digits, while the 5km run is a great first step in the world of competitive running. The 3km walk provides an inspiring opportunity to raise money for charity and get active with friends and family, while still getting the glory of finishing with a lap of the hallowed turf of the MCG.

The event welcomes the full spectrum of running abilities, from first-time runners eager to have the bucket list goal under their belt, to those who will be racing to earn their Spartan singlet – a symbol of their tenth Medibank Melbourne Marathon. Entrants range from 16 through to 80 years of age, with some runners having the impressive claim of running every single Marathon, making this event their 41st.

The Medibank Melbourne Marathon is proudly affiliated with some of the country’s most inspiring charities. Cerebral Palsy Education Centre (CPEC), celebrates its 12th year as official charity, helping children from 12 months to 18 years of age with intensive therapy and the chance to get active however they can with the Medibank Melbourne Marathon. 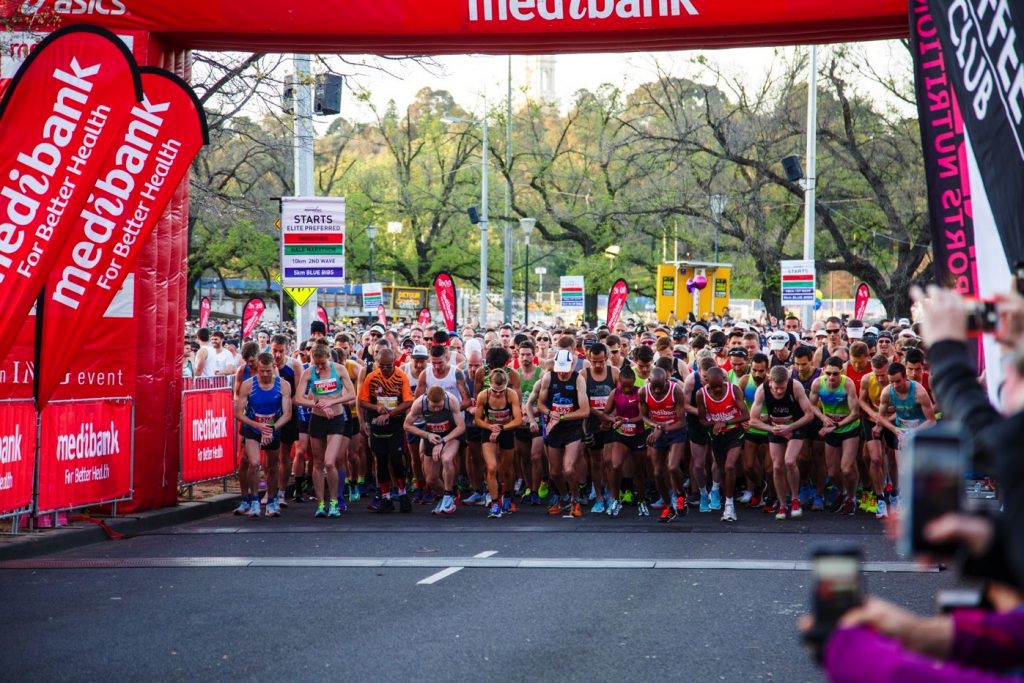 Registering to run for a charity is easy, and entrants are encouraged to set up fundraising pages through Everyday Hero. In addition to achieving a major life goal, improving fitness and boosting endorphins, the Marathon is a chance to raise funds for charities such as the Cathy Freeman Foundation, The Australian Red Cross, The Heart Foundation and the JMB Foundation – all of which help to provide support to Aussies in need.

Title sponsor Medibank remain committed to providing health solutions for 3.8 million Australians, and encouraging people nationwide to maintain an active lifestyle no matter what age. Entrants keen to train with likeminded runners will be eager to be part of the 10-week ASICS Training Club. Occurring bi- weekly and completely free, it’s the perfect chance to hit the ground running. The Active Feet Expo returns Thursday October 11, and is the one-stop shop to get advice and shop with up to 30 sponsors and exhibitors including top technology company Garmin and local activewear brand 2XU.

For those wanting to extend their training and race day experience, or support a loved one undertaking the run, the Medibank Melbourne Marathon app is a must. The app offers live tracking of all participants (without using their phones), social media integration, interactive course maps, and comprehensive event information.

Beat the price rise by registering to enter before 21 August and join thousands of other runners on achieving the goal of a lifetime.

The Medibank Melbourne Marathon will take place on Sunday 14 October. For more information and to register visit melbournemarathon.com.au. A full suite of imagery can be found here.