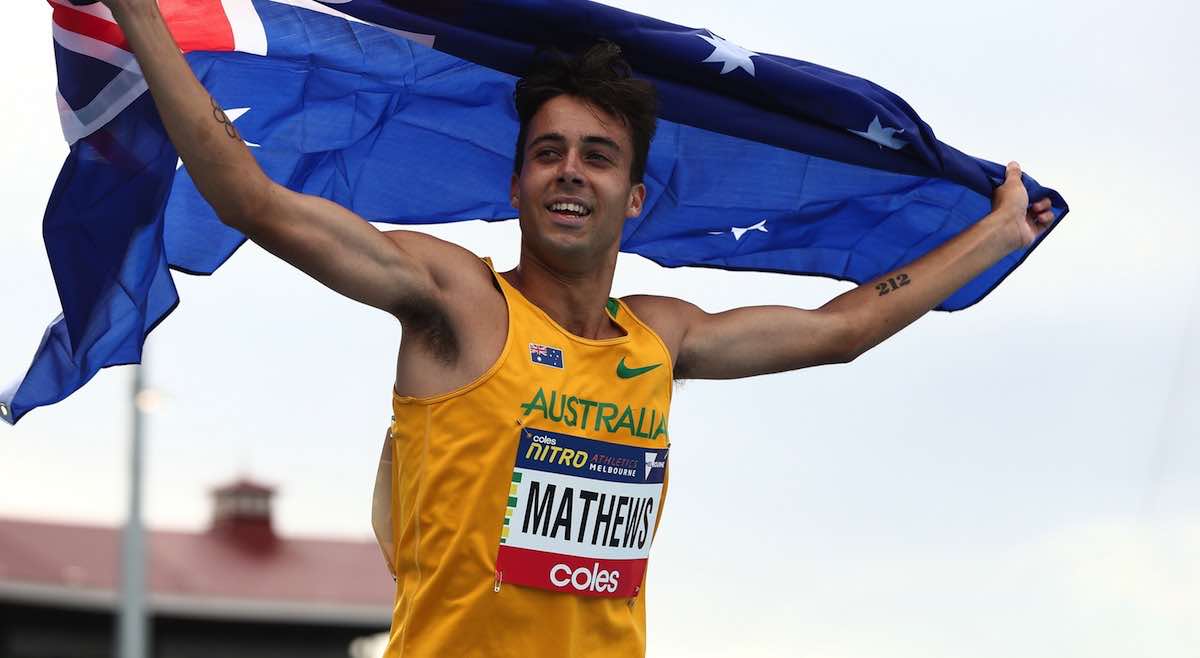 Luke Mathews (Vic) has won his heat of the men’s 1500m to advance to the semi-final at London 2017, where he will be joined on the entry lists by his teammate Jordan Wiliamsz (Vic).

Ensuring that Team Australia has two starters in second round of the event at the IAAF World Championships for the first time since 1991, Mathews’ result in a time of 3:38.19 is an improvement on his self-described poor performance at Rio 2016 and perhaps due to his newly grown moustache.

“I ran 3:35 twice with a moustache and without it I ran a 1:53 in the 800m and two other bad races, so when I heard my mate Andy Butchart (British runner) was growing one too I thought, hey why not. It’s given me a bit of inspiration,” Mathews joked.

“I thought from the outset that I wanted to sit in the first couple of athletes, from there you can see exactly what’s in front of you, so getting to a good position was great. I wanted to get up the rail earlier, but couldn’t so had to go through when I could.

“I wanted to be in the same heat as a Brit. The noise in the last lap was crazy. There was so much sound. That was one of the best experience I have ever had.”

Williamsz, too, took his 1500m on, sitting on the rail until making his move on the home straight to clock 3:46.11 to ensure his automatic progression to the next round as one of the top-six.

“You should never run further than you have to. It seems like not much to be off the rail  and working around the pack but every little bit counts. I just had to sit, bide my time and make my move when I could,” Williamsz said.

“I was racing a lot before coming here, didn’t quite get the standard but was fortunate to be offered a roll-down spot. I’ve had three weeks in Spain to get ready and we trained hard. We were out every day doing all we could, after that training block I thought I could push through in the heats.”

Ryan Gregson (Vic) also took to the start line for the men’s 1500m heats, clocking 3:43.28 in a tactical heat to cross 9th. He will not progress to the semi-final.

Hamish Peacock (Tas) led action in the field, throwing 82.46m to narrowly miss a start in the men’s javelin final.

The furthest ever throw by an Australian at the IAAF World Championships, Peacock competes arguably in the strongest event at these championships with all finalists progressing after throwing the automatic mark of 83.00m set down by the organisers.

“I’m happy to have been able to put a good performance out at a major championship. I’ve had a few failures at it before now so to throw further than 82 metres a couple of times is really pleasing,” Peacock said.

“I wanted to make amends for previous events. I may not have made the final, but I’ve proved a point to myself about performing at events like this. I’ve had a good year, a couple throws out beyond 84 metres, and a couple of good results in the Diamond League.

“The mental approach to qualifying is tough. You only get the chance to throw in it once a year, my mental approach has changed. I’ve changed my mindset on the runway. I’m more confident now and will grow more from this.”

The final Team Australia athlete to compete was Nicola McDermott (NSW) in the women’s high jump, with the debutant not clearing a height after entering the competition at 1.80m.

For more information on Team Australia, please click here to visit the hub at athletics.com.au.