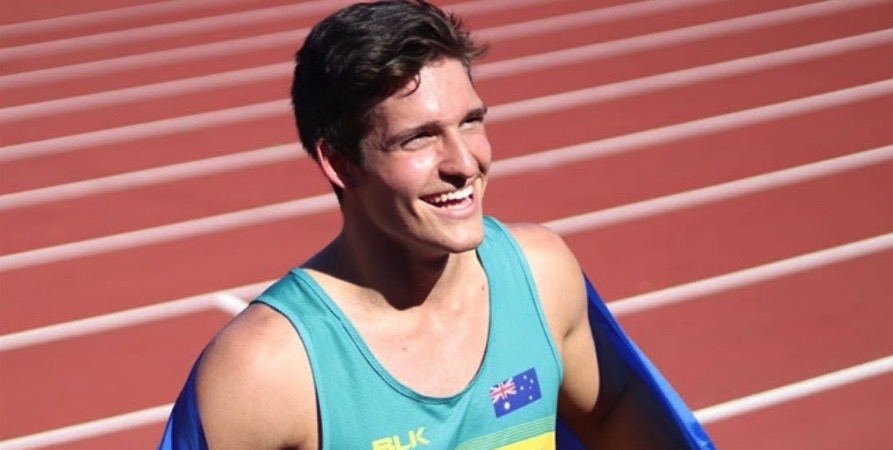 It was another golden day for Australia at the World U20 Championships in Tampere, Finland. Townsville javelin thrower Nash Lowis showed his qualifying performance was no fluke, throwing even further in the final to take the gold.

This is Australia’s fourth medal of the championships, following the 1-2 in the decathlon from Ash Moloney and Gary Hassbroek, and silver in the women’s 800m to Carley Thomas.

The women’s 4x100m relay team and Declan Tingay in the walk also broke national records, adding to the huge number of top-8 perfomances from this team,

Lowis is World U20 javelin champion

Nash Lowis is no one-throw wonder. He backed up his huge personal best in qualifying to throw even further in the javelin final and win the World U20s title in Finland with a huge 75.31m.

“I’m over the moon. I was not expecting that whatsoever.”

“I usually do pretty well in competitions. I don’t get too phased by the atmosphere of it all. I perform better in competition than training.” said Lowis.

The 18-year-old was only second at the Australian Trials in March, behind Cameron McEntyre, but turned a lot of heads when he threw 74.38 metres to qaulify on top, a best by over three metres.

He started the final slowly with 67.75m and 69.77m before really winding up. He threw 73.47m on his third attempt to take the lead. His fourth attempt was another huge 72.66m but it was his fifth attempt of 75.31m that sealed the title.

Coach Leslye Muller will be thrilled with the winning distance and consistency of the series. The performance of this young athlete on the other side of the world is even more amazing considering six weeks ago he was doubtful to compete due to injury.

“Every coach is different but most of the stuff my coach teaches me is very different to how other javelin coaches train so it’s very interesting and something I really like.” said Lowis.

The only other medal for Australia in this event was Steven Madeo (VIC) with bronze in 1996.

Declan Tingay (WA) finished an outstanding fourth in the gruelling 10,000m walk and broke Olympic medallist Dane Bird-Smith’s Australian U20 record with a time of 40:49.72.

The 19 year-old was thrilled with his performance.

“The perfect race, the race was perfect I couldn’t ask for me,” he said.

“I’ve been focussing a lot on my technique for the past five weeks and I think it all came together today.”

His teammate, Kyle Swan (VIC) was also in exceptional form to finish sixth in a new personal best, 41:24.12.

“This is the first time I’ve been a contender on the world stage. Today I was in the front pack and at one stage I was even leading, so it was great fun out there. Super tough but really really good.” said Swan.

Coached by his father Steven, Tingay was close to Bird-Smith’s record when he won the Trials in a 61 second best. The West-Australian got a taste for international competition when he raced at the IAAF World Race Walking Teams Championships in China, in what was a prelude to his form in Tampere. Despite a time penalty during that race, he still recorded a 10km road walk personal best of 42:01 to place 14th.

Katie Hayward (QLD) raced superbly in the 10,000m walk final at the World U20 Championships in Finland to place a brilliant fifth in a fast 45:10.42.

Only former World Championships representative Jess Rothwell (VIC) has recorded a better placing and time at these championships when 4th at the 2008 edition with 44:44.22.

To stay focussed during the event, Hayward said she “broke the race down into each K’s. Once K and then the next K. Aim for the next and then for another one after that.”

“I focussed on the people in front so I could get faster and then go by them and try and hold on.”

On her coach Steve Langley’s reaction, the teen said “He’s ecstatic. He’s happy. He has a big massive smile on his face”

At the World Race Walking Team Championships in Tainan, China earlier this year Hayward was “disqualified 200m from the line so it’s a nicer feeling here crossing the line.”

The tall 17-year-old was prominent in the lead group for the first half of the race and keeping an eye on any solo surges at the front.

At around 6.5km Meryem Bekmez of Turkey made a big move and the lead group was instantly split. Hayward tried to respond but found herself fourth and 30 metres back.

The time of 44.78 seconds beat the previous record of 44.86 set at the championships in 2004, by the Queensland quartet of Jacinta Boyd, Sally Pearson, Michelle Cutmore and Rebecca Negus when they placed fifth.

“I am just so proud of us. We got the baton around and that’s what we wanted to do. The icing on the cake was the Australian record.” said Owusu-Afriyie summing up the team’s performance.

For Johnson “it was a new level of excitement. A rush of adrenalin”

And Gross, who anchored the team, said “To be out here with these girls was amazing.”

Australia ran 45.26 in the heat and snuck into the final off the back of United States, Jamaica and China having performances in their heats to forget. The Australian girls were determined to make the most of the additional opportunity to run against the world’s best, and they certainly did that.

The one change from the team that qualified for the final was the addition of Gross for the final leg, replacing long jumper Grace Brennan. Riley Day was unable to run the heat of final due to a hamstring injury.

Push in the back, photo-finish and Australia through to men’s 4x400m final

There was plenty of drama in the final leg of the men’s 4x400m relay heat involving Australia with decathlon champion Ashley Moloney (QLD) lunging at the line to secure second place and the automatic qualifier in a photo finish, 3:08.53.

Adam Kopp (WA) made his World U20s debut and led off well from the inside lane to have Australia in second behind Italy when he handed the baton to Christian Davis (VIC).

Davis who made the 400m semi-finals earlier in the week, was passed down the back straight but he responded on the run into the changeover to keep Australia in second.

Harvey Murrant (VIC) who competed in the 400m hurdles here in Tampere took the baton for the third leg and ran well to stay in touch with Italy. He passed to decathlon champion Ashley Moloney (QLD) hot on the tail of Italy with Germany looming.

Down the back straight Moloney sprinted to take the lead from Italy. The Italian Edoardo Scotti, who was fourth in the 400m final here, gave Moloney a push in the back on the way past – assuming not happy with how close Moloney was when he passed him.

With 150 metres to go Moloney slowed, Italy took the lead and Germany pulled up alongside the Australian. It looked like Moloney had lost the second spot but he responded, lunged and stumbled over the line to get awarded second place. Italy won in 3:08.35 and Germany got third in the same time as Australia, 3:08.53, with the photo finish separating the team by the barest of margins.

The Australian performance, a season best, ranks them equal third for the final with Germany, who qualified as the fastest non-automatic.

Australia’s inform long sprinters, carried their great championships form onto the track for the women’s 4x400m relay heats and ran straight into the final with a dominant performance.

On the third leg, Jemima Russell, who is in great form setting a personal best 800m time earlier in the week, clocked a tremendous 54.51 split as some of the big guns put pressure on her.

The 800m silver medallist Carley Thomas was overtaken on the last leg by the Canadian team and as the Japanese team moved up on to her heels, she responded in the home straight to bring the team home first in a very quick time of 3:35.48, on the back of her own impressive 53.82 split.

Australia will start in the final ranked third on heat times, behind sprint powerhouses America and Jamaica.

Conor McLoughlin (QLD) missed a spot in the final of the discus by an agonising 14cm.

The Queenslander was in the second qualifying group and opened with 56.57 metres, which was not far from his best and set him up nicely for the final two throws. Unfortunately, his next two attempts were fouls, adding to the disappointment of finishing 13th ranked overall.

Alexander Kolesnikoff (NSW) who made the shot put final earlier in the championships was below his best and finished with 50.75 metres from his three attempts and finished 32nd overall.

Only two athletes achieved the automatic qualifier of 60.00m, with the top qualifier being Yauheni Bahutski (BLR) with 61.72m.

Lateisha Willis (VIC) and Samantha Johnson (QLD) did well to qualify for the 100m hurdles semi-finals at Tampere 2018 and the extra experience of racing the semi-finals will help in their careers.

In fast conditions, Willis got a good start in semi-final one from the outside lane but after the first few hurdles the top athletes in the field started to pull away. The Victorian finished 8th in 13.93 seconds – 0.01 slower than her heat time and finished the championships ranked 23rd.

Willis did a great job to make the championships after injuries over the Australian summer. She was pleased with how she handled this performance on the world stage.

“It feels pretty good knowing I am running consistent and my training is paying off.

The Victorian will take a host of experience home saying “I’ve learnt how to handle the competition against everyone around the world. I’ve learned to handle the nerves. I try to control my breathing in the blocks which helps.” said Willis.

Johnson also got out well in semi-final two. The Queenslander managed to run quicker than her heat time (13.97) to place 7th in 13.85 and not far off her personal best.

Johnson finishes the championships ranked 20th for the hurdles and will run the third leg for Australia in the 4x100m relay final at the end of the session.

American Tia Jones (13.06) and Jamaican Britany Anderson (13.10) look to be the favourites ahead of the final on Sunday.

There will be nine finals decided in the final session of the championships on Sunday 15 July, with Australia represented in the men’s and women’s 4x400m relay finals.